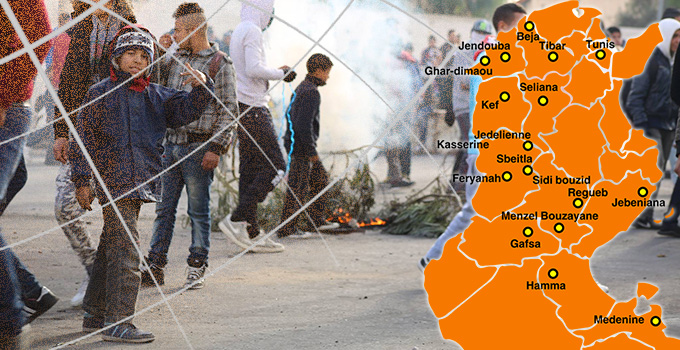 Just over a week after 28-year old Ridha Yahyaoui was electrocuted atop a utility pole in Kasserine, young protesters demanding regional development and employment continue their sit-in before governorate headquarters. On Sunday, January 24, the unemployed youth issued a fourth public statement since the beginning of their demonstration (Monday, January 18).

We, the sit-inners for our right to employment and development and the positive discrimination of our marginalized region, declare our attachment to the peaceful and independent nature of our movement and to the legitimacy of our demands, and inform public opinion of the following:
The failure of the attempt to infiltrate our gatherings to the end of stopping our peaceful movement and instrumentalizing our legitimate demands;
Our determination to accelerate the rhythm of our actions owing to the continuation of a policy of false promises and the failure to engage a direct dialogue with the authorities concerned and sit-inners. Our reprobation and condemnation of the deaf treatment that the government has reserved our repeated requests for dialogue; Our categorical refusal of the condescending and centralized treatment of issues concerning the region of Kasserine and its youth;
Our determination to face the system of corruption and dictatorship, of the contemptible centralization committed by the bureaucracy which has marginalized our region for years and which is trying once again to exclude us from development and employment programs;
The continuation of our peaceful struggle to impose the social question in general and employment in particular as an absolute priority. Wajdi Khadraoui, Spokesman for the sit-inners at governorate headquarters, Kasserine.

Today, Monday, January 25, a demonstration took place in Sidi Bouzid on the city’s main street. Organized by the Union of Unemployed Graduates (UDC), the Tunisian General Labor Union (UGTT), and the Tunisian League of Human Rights (LTDH), marchers headed to governorate headquarters where they demanded the governor’s presence. “Last week, he promised us a meeting to hear our demands for development and employment. But he cancelled everything at the last minute without giving a valid explanation,” recounts Atef Affi, UDC member in Sidi Bouzid. In efforts to repress the gathering, police “sprayed people with tear gas and attacked even passers-by with batons,” Affi said. Meanwhile, unemployed youth in Regueb (40 kilometers from Sidi Bouzid) assembled in front of the delegation calling for regional development, employment, and an examination of corruption.

A large demonstration took place this afternoon in downtown Jebniana (Sfax), protesters calling for the issues of development and employment to be put on the table, or else for the dismissal of the current government. In El Hamma (Gabes), protesters blocked the national highway between Gabes and Kebili to prompt a dialogue with regional authorities. Local media reported the closure of the region’s administrative offices for the day. In Gafsa, a number of peaceful demonstrations were carried out by unemployed graduates, skilled workers, and Mécanisme 16 workers who called for more creativity and the positive discrimination of disadvantaged regions.