“The slogans are the same today as they were five years ago,” said Manel* as she recalled the events of 14 January 2011 on Avenue Habib Bourguiba. “But then people were afraid. It was curfew. People kept looking overhead because there were snipers. We were prepared to die,” she recounted with a humorless smile. Manel was on the Avenue with other young activists, members of the Tunisian General Students Union (UGET) when they gathered before the Ministry of the Interior in 2011.

Indeed, the atmosphere in Tunis was anything but fear-ridden in spite of the omnipresence of security forces throughout the capital on Thursday, the fifth anniversary of the revolution. And after five years of struggles to keep the country on track, civil society demands for “work, freedom, and dignity” have remained unchanged.

At 9:30 on Thursday morning, a few dozen men and women stood in clusters outside UGET headquarters in Bab El Khadra. For the past month, 28 union members have been on a hunger strike on behalf of some 700 “mefrouzine,” individuals blacklisted during the Ben Ali era for having spoken out against the regime. Stigmatized and unemployed to this day, UGET and UDC (Union of Unemployed Graduates) members had gathered downtown to insist that the government fulfill a promise to address their case.

Around 10 o’clock, several union members emerged from the building holding tin plates and metal spoons to be used as noise-makers and an allusion to the empty stomachs of strikers. About seventy marchers set off, banging pot tops, tart pans, and utensils to the rhythm of their chants. “Sheddine sheddine fi teshghil el-mefrouzine,” they sang out, calling for their right to employment as cars and motorcycles honked in frustration behind them. On Avenue Madrid, pedestrians paused to watch, some holding out telephones to record the event; shop owners stared out from behind their counters, and mechanics emerged with blackened hands from their workshops. From a tiny balcony overlooking the street, an elderly man wearing a sheshiya called out in solidarity with the marchers: “The people are fed up!” 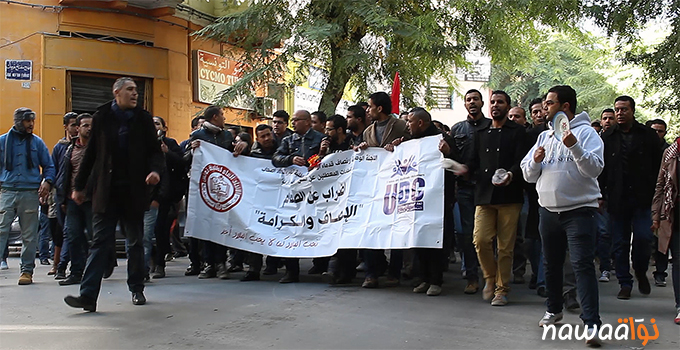 Avenue Bourguiba was a river of mixed currents, demonstrators of various unions, associations, and political parties swirling past one another, passers-by and journalists roaming in between. At 11:00 am, the Families of the Martyrs and the Wounded were gathered in the center of the avenue brandishing photographs of relatives who had lost their lives between 10 December 2010 and 14 January 2011. The National Front, carrying party signs and posters of Mohamed Brahmi, had assembled in front of the Hana Hotel alongside half a dozen security vehicles. At the west end and occupying the greatest surface area of the avenue was Ennahdha, who had set up, as in events past, a stage, a giant screen, and loudspeakers.

UGET and UDC marchers, now a hundred or so behind a common banner, headed in the opposite direction and stationed themselves in front of the Ministry of the Interior. Here, the presence of security forces seemed to match that of demonstrators. Outside the Ministry, a line of white- and black-vested police officers faced the avenue, standing silently or weaving through the crowds were a number of plain-clothes officers. Two of the latter observed some protesters who had perched themselves half-way up a couple of tree trunks to address the crowd. “Do you know what they want?” one of the agents asked casually.

Back towards Ennahdha’s set-up, Manel took respite from the river of people at a café table. “Hela hela ya matar” blared from the center island of the avenue to the sidewalks where parents pushed strollers and held the hands of children; adolescents walked in twos and threes toting plastic boutique bags; café terraces were brimming with young and old as still more waited for tables to open up. When the song ended, Ennahda supporters chanted for the party’s return to leadership– “Ashaab yourid Ennahda min jdid!”

Manel tapped away the ashes of her cigarette and laughed ironically. The day was a strange way to mark five years since the revolution—streets teeming with foot-traffic, cafés and shops full, music blaring from loudspeakers where the Tunisian flag billowed on the large screen. “It’s almost like November 7 under Ben Ali,” Manel remarked. After all, many of those assembled–un-employed, activists, strikers, union members–on Avenue Bourguiba on Thursday were there not to celebrate as much as to demonstrate in the name of the unachieved objectives of the revolution.