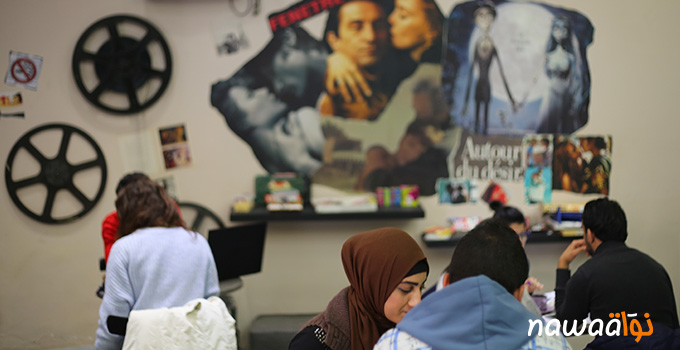 Mohamed Frini remembers coming to see movies at Cinéma Amilcar in Manar when he was five years old. When the owners decided to close and sell the theater in May 2015, Frini, who works in film distribution, was shocked. He was approached by friends Kais Zaied and Amel Saadallah, the founders of CinéMadart in Carthage, who proposed that they come up with the means to purchase the theater and its adjoining cultural café. Four months later, Cinéma Amilcar reopened its doors, with Frini as its new director.

Frini, Zaied, and Saadallah are associates of Hakka Distribution, a company dedicated to promoting films—African, Arab, and particularly Tunisian—that tend to get less visibility. Cinéma Amilcar was one of the few outlets for independent films, and its closure was a threat to their business and their passion. Frini describes film production in Tunisia as a broken chain—people write screenplays and invest in creating movies that never reach an audience; their work in distribution aims to fuse the rupture, to provide a connection with the public that will encourage potential filmmakers to create films.

“We were bewitched by the idea,” smiles Frini, who explains that “we were encouraged by the owner…she was patient with us … we weren’t millionaires.” Lacking the economic resources and business background that would facilitate the transaction, the three set to work soliciting the contribution of friends, family, private investors, and banks, and developed a business plan. After several months of many phone calls, discussions, and fund-raising, they reached their goal and, on 1 October 2015, Cinéma Amilcar reopened its doors with “Ksayer wou yhayer,” a series of Tunisian short-films.

Adjoining the theater is KinoClub, a space that once housed a second movie screen and is now animated most days, from morning until evening, by students, movie-goers, and neighborhood residents. On any given day, most tables are occupied by young people huddled around computer screens or chatting in small groups or working silently in pairs. A rotation of Soap Kills and Gnawa Diffusion and Lana Del Rey plays in the background; Namoussa, the resident cat makes rounds, stopping here and there to paw at backpack strings and rub against the backs of chairs. Cyrine Hammemi, twenty-one years old, is a student at the University of Social and Human Sciences. She also runs the floor at KinoClub four days a week, making espressos and green tea, keeping track of supplies, and, as she explains, doing a little bit of everything. Hammemi clearly enjoys the work; many of the individuals who come are classmates and acquaintances, students who come for a break between classes or movie-goers who stop in before a film. She meets a lot of people and most importantly, it is one of the few places where she can work part time.

No, not a café, Hammemi clarifies—KinoClub is a cultural space. The difference is important. In addition to free Wifi and outlets at the base of every table, the space is equipped for film projections and small concerts. Frini, who has organized about a hundred festivals, concerts, plays, and film screenings throughout the country (primarily outside of the capital) is working on a diverse program for KinoClub. This month, the space will host a theater workshop for children at the end of which they will put on a show for the public. Frini also hints at ciné-concerts to come and collaborations with jazz musicians, but doesn’t want to give away too many details at the moment.

Opening and running a space that has no legal status and little to no support from the government is not easy in post-revolution Tunisia. If the opening and reopening of cinemas and cultural spaces is on the rise in recent years—not only in Tunis (CineMadart, Cinévog, Rio) but other cities and towns (Bizerte, Kelibia, Gafsa)—it is owing to the creativity, resourcefulness, and perseverance of individuals who are passionate about art and culture and seek to fill a void with their endeavors.

Article 42 of the new constitution holds that “The right to culture is guaranteed. The right to creativity is guaranteed. The State shall encourage cultural creativity and promote national culture…” But the country’s outdated laws governing cultural activities do not serve these rights. The code regulating film distribution remains unchanged from the era of President Bourguiba and, in spite of the number of self-proclaimed cultural spaces that have begun to sprout up throughout the country, there is no such legal designation; If the constitution implicitly protects such projects, the law does not, and indeed a number of them have been forced to close their doors over the past couple of years.

Frini does not dwell in the economic and legal uncertainties of the project. He insists that anyone who is inspired to take on such a project in Tunisia cannot wait for the funds to materialize and for the legal framework to be adapted to a changing reality. If anything has shaken the associates and employees of Cinéma Amilcar thus far, it is the recent arrest of Adnen Meddeb, the theater’s principal projectionist.

Meddeb is also a member of the organizing committee for the Journées Cinematographique de Carthage (JCC), the annual film festival which took place in November. Having surpassed curfew on the closing night of the festival, Meddeb and co-organizer Amine Mabrouk were stopped at a police checkpoint and taken in for interrogation after police found rolling papers in Mabrouk’s car. Accused of possession with intention to consume a narcotic, violation of curfew, and public drunkenness, the young men have been sentenced to one year imprisonment and a fine of 1,000 dinars.

“He’s not only the projectionist, he is one of the pillars of the functioning of this space,” explains Frini. Meddeb’s colleagues at Cinéma Amilcar describe the void he has left behind: like the others, he has been a part of the project from the outset, involved in creation, management, and planning. They describe him as an artist and an activist, the sort of profile that fits the many young Tunisians—film producers, rappers, and others— who have been arrested, detained, and imprisoned via the controversial Law 52.

As their colleague awaits a hearing in the Court of Appeal, the Cinéma Amilcar team remains hopeful and maintains enthusiasm for their project. Last month’s film festival—which coincided with the November 24 attack in Tunis—drew about 100,000 spectators to movie theaters across the capital within the span of a week. Frini and Hammemi affirm that, in spite of the “state of emergency” and curfew, movie-goers have continued to turn out for films. Indeed, in a political context where cultural expression is stifled as security measures are intensified, going out to see a movie becomes an act of resistance.