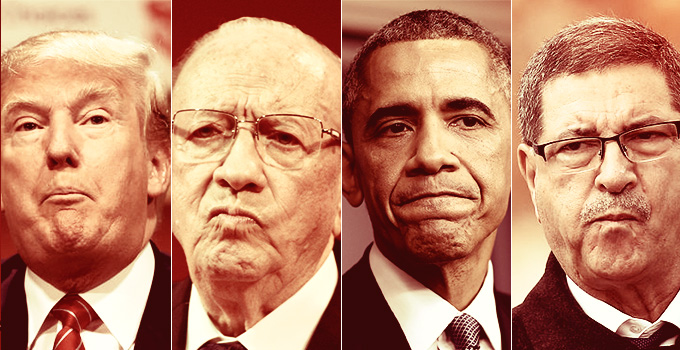 On November 24, the United States strongly condemned the terrorist attack in Tunis and reaffirmed its commitment to economic, governance, and security cooperation with Tunisia. On December 2, a shooting in San Bernardino, California killed fourteen county employees and wounded twenty-two others. Authorities quickly classified it as a terrorist attack. How has the US responded to this most recent act of political violence on its own soil?

Comparing political discourse, media coverage, and key debates that have been stirred up in each country following these tragedies points to some interesting commonalities, in particular the failure to face the underlying, internal factors that fuel terrorism.

End the Gun Epidemic in America, The New York Times announced on its front page two days after the tragedy in San Bernardino. “It is time to stop talking about halting the spread of firearms, and instead to reduce their number drastically—eliminating some large categories of weapons and ammunition,” the Editorial Board stated, provoking a slew of reader commentaries and subsequent articles in the days that followed. Addressing the nation on Saturday, December 6, President Obama stated the need to “make it harder for people to buy powerful assault weapons like the ones that were used in San Bernardino,” and to ensure that “no one on a No Fly List is able to buy a gun or buy powerful assault weapons.”

Although reports and statistics offer evidence of the staggering number of deaths by firearms in America— more than 33,000 per year, according to the Center for Disease Control, the push for tighter gun control laws as a mechanism of prevention has recently (and historically) met with strong–and ultimately successful–resistance. Some who challenge greater control point to a lack of evidence that such an approach would be effective, particularly in the case of mass shootings which specialists have indicated are too infrequent and sporadic to generalize and address through specific policy measures. To support this argument, they refer to California’s gun regulations—the the strongest in the country—which did not prevent the San Bernardino attack.

If a survey published in November suggests that Islamophobia is on the rise among Americans, the statements and discourse of governors, senators, and presidential contenders attest to the profusion of anti-Islam rhetoric in the political arena. Indeed, xenophobia has permeated debates on terrorism, immigration, foreign policy, and national security where Democratic and Republican candidates seek to distinguish themselves in the presidential race. In the weeks since the attacks in Paris, no one has embodied fear-mongering and Islamophobia more than front-running candidate for the Republican Party, Donald Trump.

Donald J. Trump is calling for a total and complete shutdown of Muslims entering the United States until our country’s representatives can figure out what is going on. Trump Campaign press release, Monday, 8 December 2015.

On September 10, Obama advised the administration to accept at least 10,000 Syrian refugees into the country in 2016. Though Trump may represent the most extreme version of opposition to the plan—his proposed alternative is to create a “safe zone” in Syria—he is certainly not alone. Other candidates have proposed that the US only accept Christian refugees; one senator suggested the creation of a camp to keep refugees segregated from citizens. According to The Hill, a total of 28 governors (27 Republicans, 1 Democrat) have indicated that they prefer to block Syrian refugees from settling in their states, prioritizing the safety of their residents.

Democrats and Republicans alike have denounced Trump’s statements which have stirred up emotions beyond US borders. President Obama has implicitly condemned the Republican candidate’s remarks, reminding “all Americans—of every faith—to reject discrimination … to reject religious tests on who we admit to this country,” political analysts have detailed how he is the antitheses of the values upon which the country was founded, and citizens have responded with creative sarcasm on social media. Right-wing and mainstream media remain nonetheless active in the propagation of generalizations, misinformation, and Islamophobia, as the story of Muslim American Saadiq Long confirms.

Scarred by recent tragedies that are the result of political violence, each country faces its own deep-seated and complex issues which are teased out in political, public, and media landscapes. Evoking an imagined national unity and advocating border control measures to combat smuggling and terrorism, Tunisia’s leaders fail to implement vital reforms and elaborate a comprehensive strategy that addresses socioeconomic ills. Exhibiting fear and mistrust of immigrants and refugees desirous of settling in the country, American politicians at once cling desperately to an ideal of domestic security and ignore the often disastrous and consequential effects of US foreign policy. So long as attention remains fixed at country borders to keep terrorists out, the greatest threats to national security will be kept alive within.

More than security, human rights are threatened in Tunisia