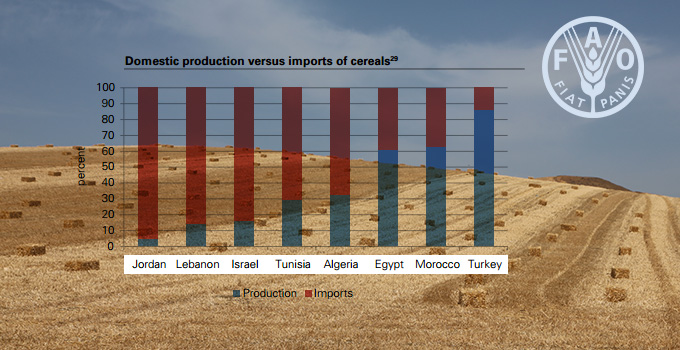 Representatives of Tunisian farmers’ unions insist on agriculture’s currently vital and potentially stabilizing role for the economy. Featuring dozens of charts to display trend analyses, a recent report by the Food and Agriculture Organization of the United Nations offers a more nuanced perspective, identifying the “relatively low” and even “falling” importance of agriculture in the national economy while pointing out that the sector has nonetheless buffered the blow of economic crisis and may represent a “missing link” in fighting high youth unemployment.

Consumption trends and nutrition outcomes
With population (130 million people in the SEMED region) and GDP per capita on the rise, SEMCs can expect a significant increase in consumption and shifting food demands in the years to come. Dubbed “important food importing countries,” SEMCs display high agricultural trade deficits that are expected to increase as demand grows for more diverse and higher quality sugar, vegetable oils, meats, dairy products and fish. Trade deficits in North Africa, for instance, are projected to increase as much as 40% for dairy, 30% for sugars, 23% for oilseeds, 15.5% for meats, and 15% for cereals by 2023.

Cereals currently constitute more than half of the daily per capita caloric intake across the SEMED region—nearly double the amount consumed across European Union countries. “…the contrast with the EU is striking but expected given that consumers in poorer countries tend to eat more staples,” note Santos and Ceccacci. In Tunisia, wheat constitutes 96% of all cereals consumed and 50% of daily per capita caloric intake, versus a worldwide average 18.5%. Consumption trends and poverty levels are important determinants of nutrition outcomes and are associated in the SEMED region with child malnutrition and obesity. 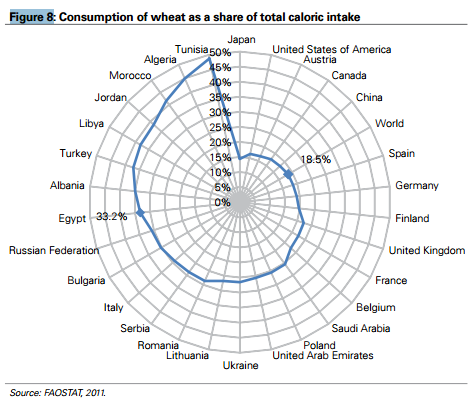 …in all SEMCs, agriculture maintains a prominent role in terms of social stability at a delicate moment in the region’s transition. Nuno Santos and Iride Ceccacci, Key trends in the agrifood sector

Much as trends in consumption and poverty are studied to understand nutrition outcomes, data relating to GDP and employment can be used as tools to gauge agriculture’s socio-economic impacts. Authors Santos and Ceccacci discern two types of countries: urbanized, including Jordan and Tunisia, where the majority of poverty is concentrated in urban areas, and transforming, such as Egypt, Morocco, and Turkey, where poverty is mainly rural. In spite of this distinction, the share of agriculture in GDP and GDP growth is relatively low and decreasing across SEMCs. As a share of total employment, agriculture also appears to be declining but is nonetheless seen to act as a buffer for high unemployment trends, especially among youth. Since the economic crisis in 2008, youth unemployment has increased throughout the MENA region (and both sides of the Mediterranean)–except for Tunisia, where it was the highest in the region (42%) in 2011 and has since declined.

The agricultural sector’s most important form of investment is private, followed by public spending. Government expenditures in the form of subsidies, the authors note, is “expensive, inefficient, more beneficial to the rich than poor, and have distorting effects on consumption and economic activity.” State- and private investor- promotion of productivity must, the authors advise, take into account food security and nutrition. Policies encouraging productivity should allow for the re-allocation of land to higher value-added crops such as fruits and vegetables. This sort of domestic market expansion plus a focus on labor- and management-intensive activities can support growth and contribute to employment throughout the SEMED region. 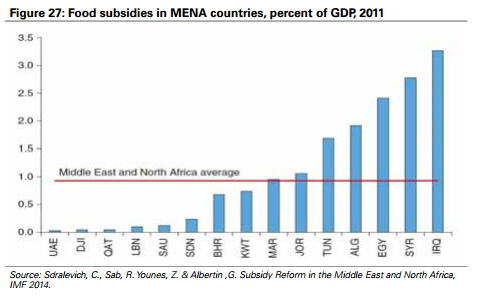 Trade: comparative advantage and diversification
Agricultural trade deficits in SEMCs generally constitute an important share of the GDP. Increasing trade deficits are largely associated with cereal imports, driven by high consumption, relatively low productivity and low comparative advantage. While the diversity of export items is variable, products that represent a comparative advantage throughout the region include fruits and vegetables, olive oil, and processed goods; cereals notably do not fall into this category. The diversity and sophistication of agrifood exports (processed and higher value-added products) from the region is increasing as is diversity of trade partners beyond the European Union and MENA region (in particular the Russian Federation, Ukraine, and Brazil). Growing trade activities largely reflect the importation of goods such as cereals, especially wheat. Santos and Ceccacci argue that reducing dependence upon the world’s “wheat giants”—the European Union and United States—through diversification of suppliers will contribute to food security. Additionally, the improvement of import value chains (in terms of logistics, infrastructure, and administrative procedures) and a focus on growing foods with comparative advantage can reduce spending and dependence on imports. 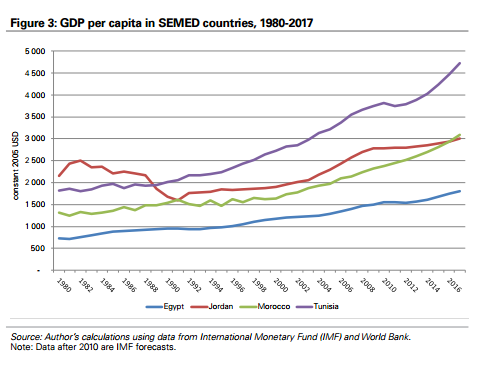 Greenhouse gas emissions associated with agricultural activities have increased in SEMCs while the proportion to total greenhouse gas emissions—currently 15% in Morocco, 10% in Egypt and Tunisia, and 5% in Jordan–has declined. Animal production and primary agricultural activities contribute largely to these emissions, though the emissions of agro-processing activities are on the rise. Strategies to mitigate these trends include the development of water- and energy-efficient irrigation systems, improved water management, and both private and public sector investment in promoting sustainable technologies and practices. 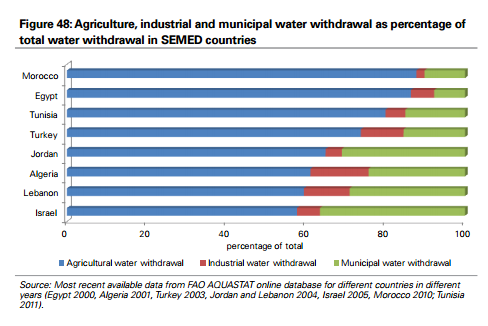 Increasing cereal productivity in the SEMCs and MENA is usually seen as a valid policy agenda item. Still, it can be questionable when it is part of a major push towards self-sufficiency. Nuno Santos and Iride Ceccacci, Key trends in the agrifood sector

The FAO report can serve as a reference for discussions concerning agricultural policy reforms and food security in Tunisia. Land management issues and state regulations and spending represent primary concerns—and disparities—among small farmers and large-scale land operators. Whereas historically active in voicing their demands, small farmers have negligible presence in the political sphere and their interests remain unrecognized in national dialogue centered around national security and economic growth. Even if, as the FAO report demonstrates, agriculture currently represents a “relatively low” share of GDP and its contribution to GDP growth is “falling” across all SEMED countries, agriculture is the heart of food security and nutrition outcomes and may be the “missing link” in combatting youth unemployment.

Policies governing Tunisia’s agricultural sector, particularly in terms of land management and the production of high-value, low-nutrition crops (such as wheat), neither promote comparative advantage for trade nor the particular capacities and potentials of small-scale farm operations. Unilateral decisions, outdated and inefficient distribution circuits, high production costs and controlled prices for staple food items have long prompted farmer-led protests. Milk has been poured into rivers and dates dumped into the streets as small-scale producers have denounced, respectively, inadequate capacity of collection/storage centers and pressure (from intermediaries and exporters) to lower prices for their products. Although “improving efficiency and public spending and in particular targeting food subsidies” are common elements of messages expressed by Tunisian farmers and international organizations alike, neither spilled milk nor statistical analyses have yet to move political leaders to undertake truly inclusive decision-making processes2 and much-needed reforms in the country’s agrifood sector.

1. The Southern and Eastern Mediterranean countries (SEMCs) discussed in the FAO report include Algeria, Morocco, Egypt, Israel, Lebanon, Tunisia, Jordan, and Turkey.
2. Officially launched 20 May 2015, the country’s ‘national consultation’ to address agricultural sector reforms is regarded by some to have been a mere ‘formality.’ Participants’ ideas and proposals were apparently heard but not necessarily listened to, and the subsequent drafting of a plan took place behind closed doors.