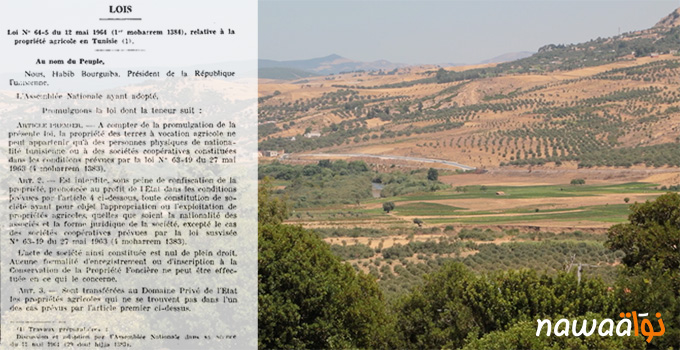 Months after the Ministries of Agriculture and Land Affairs launched a ‘national consultation’ to address issues and reforms in Tunisia’s agricultural sector, parliamentary commissions set to examining associated legislative measures: Draft Law N°33/2015 concerning debt rescheduling for tenants of state-owned agricultural property and Draft Law N°53/2015 relating to the Complementary Finance Law of which Article 27 concerns debts within the agricultural and fisheries sector. On 20 May 2015, entrepreneurs, civil society and political party representatives, and ARP deputies convened in Gammarth where Prime Minister Habib Essid and Minister of Agriculture Saad Sedik spoke of a new development strategy. The five-year plan, according to Mr. Sedik, aims to prevent the fragmentation of State-owned lands and «improve or amend laws which organize these lands in addition to the control mechanisms and the monitoring of production systems».

The operators of State-owned agricultural lands: OTD, UCP, and SMVDA

On 12 May 1964, President Bourguiba signed Law N°64-5 concerning agricultural property in Tunisia which nationalized 800,000 hectares of agricultural land that had previously been occupied by French colonists. To manage and exploit these properties, several categories of operators have been created within the Ministry of Agriculture: the Office of State Lands (Office des terres domaniales, OTD), Cooperative Production Units (Unités coopératives de production, UCP), and Agricultural Promotion and Development Companies (Sociétés de mise en valeur et de développement agricole, SMVDA)1. Over the years, the OTD, which originally took over 500,000 hectares of nationalized lands, has developed a reputation of general mismanagement and inefficiency. An article published around the time the national consultation was launched noted that the OTD «does not achieve the objectives it has been assigned, encumbered as it is with debts, budgetary deficit, and inadequate financial resources». Little is heard of UCPs, which have dwindled from 220 at the outset in 1962 to a total of 20 today. As for SMVDA which were created in 1990 to encourage private investors to lease State-owned agricultural lands, the record is evidently inconsistent.

One of the longer-standing2 and more fruitful Agricultural Promotion and Development Companies is SEDAN (Société d’exploitation et de développement agricole du Nord), which operates on 978 hectares of land where stone fruits, citrus, honey, sugar beets, tomatoes, and wheat are cultivated and cattle raised for meat and milk products. Mounir Boumessouer is the company’s General Director as well as President of the Tunisian Farmers Union (Syndicat des agriculteurs de Tunisie, SYNAGRI) within the category of SMVDA. Boumessouer spoke to Nawaat3 about the economic challenges that farmers and entrepreneurs in the sector face due to unpredictable factors such as climate, politics, and market trends which impact the yield and prices of food items produced. This year floods in February and drought April through mid-May resulted in a greatly diminished production of wheat. «We have 230 hectares of wheat and a decrease in yield three times in a row, or 25% of last year’s production».

Other, more chronic challenges facing the sector are structural, notably an inadequate legal framework and bureaucratic delays. Boumessouer reiterates a point he made prior to the opening of the national consultation:

The State demands that SMVDA consolidate national agricultural production, alleviate unemployment, and create wealth, but without giving them the means to do it.
Mounir Boumessouer, SEDAN General Director and President of the Tunisian Farmers Union within Agricultural Promotion and Development Companies (SMVDA).

He cites Law N°21-95 of 13 February 1995 concerning State-owned agricultural properties which has become obsolete and the new cahier des charges, or contract specifications4 which he says are type model and not only ill-adapted to the regional and geographical characteristics of agricultural lands across the country but also to the particularities and capacities of each farm. Boumessouer explains that inflexibility renders the contract specifications difficult to follow and furthermore that the operator is not enabled to optimize the management and exploitation of the land leased. In order to pull out and replace the seventy year-old citrus fruit trees which remain on the property he leases and which are no longer productive, for example, he must write to the Ministry of Agriculture and await a reply, which may arrive after a year or two. His options are to do nothing until he receives a response, or to remove the trees without approval to make better use of the lands.

Farmers’ debts: inaccessible loans and a lack of subsidies

Omar Behi is the Vice-President and Representative of Animal Production and Scientific Research within the Tunisian Union of Agriculture and Fisheries (Union tunisienne de l’agriculture et de la pêche, UTAP). At UTAP headquarters in Tunis, a stone’s throw away from the UTICA and OTD offices, Behi sits down with Nawaat to quantify and contextualize the debts which have been the focus of recent discussions concerning the country’s agriculture sector. He recounts that a mere 6 percent of Tunisia’s 517,000 farmers have access to bank loans through the Crédit Campagne. Behi explains that this loan, 60 million dinars designated primarily for the cultivation of wheat, is little relative to production costs, approximately 1 billion dinars (an average of 700 dinars per hectare times a maximum surface area of 1.5 million hectares).

The vast majority of farmers who are not considered for this resource access crédits fournisseurs, informal loans made available by suppliers who sell pesticides, herbicides, fertilizers and the like. Unlike banks who provide medium- to large-size operations with loans through the Crédit Campagne, these suppliers are in direct contact with farmers running smaller-scale operations and are willing to accept payment post-production and harvest when farmers have earned money from the sale of food items produced. The cost of this sort of loan is included in the elevated price of materials and treatments purchased from these suppliers.

In addition to the inaccessibility of bank loans, there is little compensation provided farmers in the form of subsidies. According to a World Bank report published in September 2014, budgetary support for Tunisia’s agricultural sector represented 0.8% of GDP in 2010, the equivalent of 350 million dinars or 70 dinars per hectare of land. Behi explains that «this amount is essentially indirect. It includes a subsidy for bran (which is subject to a great deal of trafficking), support via agricultural investments, subsidies for fertilizers (ammonium nitrate, Super 45, and DAP) and selected (grain) seeds, and tax assistance». These resources, Behi posits, would be more useful in the form of direct support for farmers.

Whereas in many countries farmers are afforded sizeable subsidies as incentive to produce staple food products, the Tunisian government has historically opted for a low-cost approach, keeping items such as bread and milk at controlled prices so that they remain affordable even for those who earn a meager salary. As Behi points out, this creates a discrepancy which bears a direct impact upon the farmer. Whatever the yield and cost of production for a given season, the farmer is obligated to sell at a set price, essentially paying the difference for the consumer and reaping minimal (or possibly no) profits.

To compound the effects of this year’s temperamental climatic conditions on agricultural production, the terrorist attacks in March and June have had a significant impact on food demands. A drastic decrease in the number of tourists over the past months has meant a drop in the consumption of fruits, vegetables, milk, and bread. In the meantime, the cost of production, materials, and transport (particularly during the sweltering summer months when traveling long distances to deliver perishable food items from farm to market) remains high.

In the wake of the attacks in Tunis and Sousse, political discourse and economic resources have poured into addressing national security and the tourism sector. Unfortunately, both of our interlocutors emphasized, not enough importance has been placed on the country’s agricultural sector in spite of its currently vital and potentially stabilizing role for the economy. Behi recalls that the tourism industry, which has received considerable budgetary support in the Finance Law for 2015, represents some 6% of the country’s GDP and has a debt upwards of three billion dinars; in contrast, the agricultural sector constitutes 10-12% of the GDP and the sum of all associated debts are about one billion dinars.

If important steps have been taken to improve management and optimize exploitation of State-owned agricultural lands and alleviate the debts of tenants who lease these properties, adopted measures are yet limited and incomplete; In spite of the attempt to promote transparency and reinforce control mechanisms after January 2011, Boumessouer relates that the new SMVDA contract specifications are vague and ill-adapted to the diversity of agricultural lands; the Compensation Fund which is designed to amortize the high cost of wheat production is minimally funded. As for the opening of a ‘national consultation,’ presented as a discussion in which actors across the sector took part to inform a new development strategy, Behi characterized the event as a formality. Participants’ ideas and proposals were apparently heard but not necessarily listened to, and the subsequent drafting of a plan took place behind closed doors. He described the need for a genuine national debate in which farmers and entrepreneurs play a decisive and not just consultative role.

Working at the very heart of a sector upon which depends the country’s food security and, to a certain extent, the economy, Tunisian farmers have yet to gain substantial financial backing, adequate legal support, and due political recognition. Moving onward from a year of climatic fluctuations and political violence which have had devastating effects upon the sector, government officials and decision-makers will do well to recognize and invest in agriculture as the base from which sovereignty, security, and stability can grow.

1. Omar Behi. Personal interview. 17 August 2015.
2. After the revolution, the Agricultural Investment and Promotion Agency (Agence de promotion des investissements agricoles, APIA) was designated the responsibility of evaluating the companies eligible to operate as SMVDA. In January 2014, it presented a list of 22 new companies bringing the total number of companies in this category to 45.
3. Mounir Boumessouer. Personal interview. 13 August 2015.
4. After 14 January 2011, a new set of contract specifications were created in order to promote “objectivity, equity, and transparence” in the leasing and management of State-owned properties by the operators of SMVDA (State-Owned Lands: an equation of several unknowns, Maghreb Emergent. 18 April 2015).