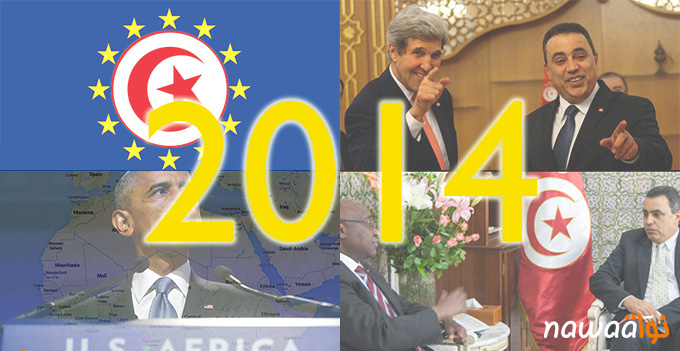 What comes up frequently as we reflect on 2014 is the weak role that the judiciary has played throughout the past year…The main pillar upon which democracy rests is the collectivity of its judicial bodies that is vital for the regulation of social-institutional relations … one of the greatest dangers that threatens the new Tunisian democracy is indeed the lack of harmonization between the human and material resources of the justice system with the new demands of post-revolution Tunisia.” Nawaat, Recap of 2014: A Pivotal Year for the Future of Tunisia’s Democracy.

At the beginning of the year, Nawaat published a Recap of 2014* examining the past “Year of Compromise.” Chapters on The New Constitution, Transitional Justice and Social Movements, Elections, Media, Technology and Rights, and Economy synthesized the key events and issues that defined (what was on paper) the final stage of the country’s democratic transition. Equally worthy of a retrospective examination are the agreements, programs, and reports initiated and authored by foreign governments and international institutions. A chapter on Foreign Interest, Investment, and Engagement in the “Arab World’s First Democracy’ would have fit nicely under the heading A Year of Compromise, a title that is also pertinent to the conditionality of economic adjustment and development programs such as those prescribed to Tunisia. In the domain of judicial reform which was at the heart of many controversies and issues throughout 2014, Western democracies resolved to see Tunisia’s democratic transition succeed represent both the imposition of outside economic, political, and strategic interests, but also what Tunisia’s justice system lacks and desperately needs: a tradition of case law to inform decision-making and legal processes.

Whereas vague concepts such as public security, national defense, and public morale leave room for interpretation even in the context of Western democracies, in Tunisia such ambiguities reflect a great legal insecurity that is consequence of the absence of case law. A long tradition of case law is fundamental to the functioning of long-standing democracies and is a guiding reference for Constitutional Courts, and has yet to be established in Tunisia. Nawaat, Recap of 2014.

Certainly the chapter would discuss the manifold aid packages, agreements, and reports that represent foreign interest, investment, and engagement in Tunisia’s nascent democracy. The names that occur and re-occur throughout the course of the year are of course the European Union, the United States, the World Bank, and the International Monetary Fund. The table below includes some of the programs and suggested reforms that were the subject of discussions in media and civil society throughout 2014. 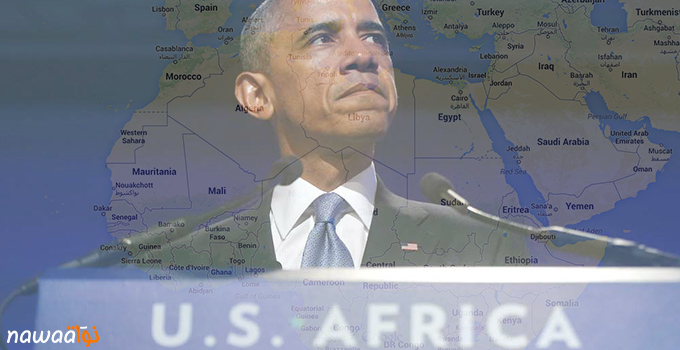 Last year the US Department of Defense supported Tunisia in counterterrorism efforts at country borders, against the trend of foreign fighters flocking to Syria, and against Al-Qaeda splinter groups in North Africa. In October and November, the US government provided security equipment including law enforcement officer safety and protective gear and Night Vision Devices; in August, Washington hosted the first US-Africa Leaders Summit which coincided with then-President Moncef Marzouki’s request to expedite the provision of twelve Black Hawk helicopters that the US Defence Security Cooperation Agency had proposed in order to “improve the security of a friendly country in North Africa.” It was on the same occasion that President Barack Obama announced the Security Governance Initiative (SGI) committing financial assistance to enhance security operations in Ghana, Kenya, Mali, Niger, Nigeria, and Tunisia. “Together, the United States and participating African countries will work to improve security sector institution capacity to protect civilians and confront challenges and threats, with integrity and accountability. To support a longer term focus, SGI will involve multi-year funding commitments of increased U.S. support and will require sustained, high-level leadership and commitment by partner countries to pursue policies in support of the agreed upon goals.”

After the White House issued a press release announcing the new initiative, Nawaat contributor Yassine Bellamine explained how US investment in security and counterterrorism efforts in North Africa was driven by its interest in stifling factors detrimental to economic growth in “a future market where investments will abound.”

It is clear that we are moving from a series of short- to long-term objectives in which Tunisia will be once again forced into a balancing act between sovereignty, economic interests, and relations with its “partners.” Yassine Bellamine, US Security Governance Initiative: Tunisia in the Spotlight.

How to Engage in a Successful Partnership in the Justice Sector?

In October 2014, the European Union committed 25 million euros to the Support Program for Justice Reform (PARJ). Specific program objectives, according to a Plan of Action for Tunisia created by the European Union, include (1) To reinforce the independence and efficiency of the justice; (2) To improve access to justice and law; (3) To modernize the penitentiary system. Bellamine emphasized the objectives’ close linkage to the Rule of Law and democracy component of the EU-Tunisia Privileged Partnership, explaining that the variable definition that each party can apply to the word democracy indicates that the program is «no more and no less than the will to impose a judiciary framework favorable to the meaning of democracy that the European Commission designates.” He concluded nonetheless that such a partnership might very well be a “necessary evil.”

In the face of the ills from which our judiciary apparatus has suffered for nearly 23 years, the idea of partnership with institutions and governments that have more experience in this domain is overall promising and may have some fruits to bear. Given the positive outcomes born of the twinning of the Tunisian with the French Courts of Auditors, and also in the context of public finance reform with the European Union, it wouldn’t be unwise to consider such a tool to succeed in what might be qualified ‘judicial transition.’ Yassine Bellamine, Support Program for Judicial Reform: A Difficult Judicial Transition

Congratulated for its electoral success, Tunisia missed the boat on transitional justice…Nawaat, Recap of 2014.

…the Committee concluded that a Report to the House was warranted because of the level of interest in developments in “the new Tunisia,” and because it illustrated how the EU continued to endeavour to help a new regime that was itself endeavouring, in what were no doubt difficult circumstances, to develop a law-based approach that, if it could be developed in this sensitive area, could have much wider positive repercussions. European Scrutiny Committee, EU Restrictive Measures Against Tunisia.

After the resignation of President Ben Ali in 2011, the European Union froze the assets of forty-eight members of the former regime for the misappropriation of State funds. “The Tunisian authorities instigated legal action against a number of these individuals for appropriation of public property, and the EU restrictive measures were designated to support this action” wrote UK-based blogger Maya Lester on European Sanctions Law and Practice. On January 31, the Official Journal of the European Union included an amendment and provision to extend the restriction until January 31, 2016. According to the European Scrutiny Committee, Council Decision (CFSP) 2015/157 prolongs the sanction against “persons responsible for misappropriation of Tunisian State funds, and who are thus depriving the Tunisian people of the benefits of the sustainable development of their economy and society and undermining the development of democracy in the country.” Minister of Europe David Lidington commented during the Committee meeting that “progress had been slow in respect of international asset recovery,” that “further action through the criminal justice system is required,” and that “supporting the aspiration to extend current restrictive measures will allow investigations into the alleged corruption of listed individuals to be completed and ensure that the structures and processes in Tunisia were in place to return misappropriated assets to their rightful owners.”

Considerations for US Congress

Finding the right balance between two inherently contradictory imperatives—security and liberty—in the context of nascent democracy is particularly difficult. Such a discovery is rendered all the more challenging given that the legal safeguard still suffers a number of deficiencies … As an organized crime, terrorism requires the means to combat it in measure with the dangers it embodies for personal security, the stability of the state, and democratic order. Such a struggle can only be successful if it equally preserves the guarantees and fundamental rights of citizens. Nawaat, Recap of 2014

On 15 February, the Congressional Research Service (CRS) published its own review of Political Transition in Tunisia as an instrument to inform Congress on decisions regarding US aid and cooperation with Tunisia moving forward. What is clear from the authors’ discussion is that security issues, which represent a guiding feature of US policy in Tunisia, will continue to drive economic and material aid in the coming years: “Congress has shaped US policy toward Tunisia through its authorization and appropriation of foreign aid, its review of arms sales and other security cooperation activities, and its oversight…The Administration has requested $134 million in aid for Tunisia in FY2016, more than double the FY2015 request, of which about 60% would be for security assistance.” In the context of this request, the authors pose several questions concerning the extent and nature of US aid and engagement in Tunisia’s post-transition reforms. Some of the questions raised aptly evoke themes highlighted in Nawaat’s Recap of 2014, in particular:

How will the Nidaa Tounes-led government approach sensitive issues such as regulatory reform, transitional justice, and security sector reform? How is Tunisia’s new constitution being interpreted and implemented, including provisions guaranteeing civil liberties…?

To what extent should the United States seek to pair counterterrorism assistance with support for greater legislative and public oversight of the security sector?

Equally apt is the authors’ closing remark, a concise allusion to questions around foreign engagement in economic recovery, national security, and justice system reforms: “Tunisian leaders have welcomed US assistance since 2011, but the local appetite for outside policy influence, now that the transitional period is formally over, remains to be seen.” Maintaining regional alliances and auspicious foreign relations is, for every country, a perpetual balancing act complicated by politics and economics. In Tunisia’s case, there will likely be for many years to come the relentless push, from both without and within, for foreign governments and institutions to supply aid, support, assistance, and know-how to the end/under the pretext of promoting economic growth, social justice, and State accountability. In this context, will Tunisia allow outside interests and impositions to define its foreign relations and, by extension, the degree of its own autonomy? or will it remain vigilant, deliberate, and selective in decisions concerning relations with its geographical neighbors, economic ‘partners,’ and strategic ‘friends’?

* A partial translation of Nawaat’s Recap of 2014: A Pivotal Year for the Future of Tunisia’s Democracy is available here: