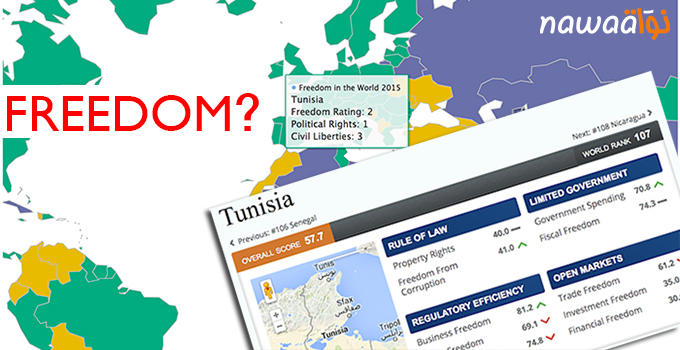 What began as the brainchild of free-market economists in the 1980’s is today a world-renowned landmark measuring economic progress in over 180 countries. From the “Special 20th Anniversary Essay” of the 2015 Index of Economic Freedom by The Heritage Foundation.

We can understand why free-market economists, corporations, and investors might be eager to read this year’s 2015 Index of Economic Freedom published by The Heritage Foundation in collaboration with The Wall Street Journal. The index’s contributing institutions alone are indicative of the intended audience for this annual report which measures “economic freedom” across 186 countries worldwide.

The entire package of information presented in this report is fascinating not simply for the expertise, quality and scope of research, but the interpretation and analysis of the data obtained. The partnering institutions, developers, and authors of the Index are clear that theirs is a free-market vision. An Investopedia entry on the topic notes that «free market is a term used to describe a political or ideological viewpoint on policy and is not a field within economics».

This and other similar indices do not define a free market, but measure the degree to which a modern economy is free, meaning in most cases free of state intervention. From the From Wikipedia’s entry on “Free-Market”

Wikipedia defines the free market principles through a description of The Heritage Foundation, the Washington-based think-tank that published the first Index of Economic Freedom in 1986. Politically and ideologically, the Foundation is right-wing: under the Bush administration, it was purportedly a strong proponent of Operation Desert Storm in Iraq; under the Obama administration, the Index has documented «the decline of economic freedom in the United States». An essay that accompanies this year’s Index remarks that «The election of President Barack Obama in 2008 ushered in an era of high government spending, regulation, and new taxes … For over five years … our nation’s economic freedom has been unambiguously eroded by excessive government spending and growth-stifling regulations, an unreformed tax system, and creeping cronyism that undermines the rule of law».

The 2015 Index of Economic Freedom reads like a brochure. Its authors maintain that the Index has been used to inform law and policy in the U.S. and in countries throughout the world, as a resource for institutions including the Millennium Challenge Corporation, the World Bank, and the Organisation for Economic Co-operation and Development (OECD) in devising development assistance, and as a reference for American corporations to direct investment abroad. Indeed, a section on “Impacts of the Index” describes it as «a superb source for business conditions in countless countries», an «important reference book for any business that invests overseas and is engaged in today’s global marketplace» and a «portfolio investment tool».

Today, we live in the most prosperous time in human history. Poverty, sickness, and ignorance are receding throughout the world, due in large part to the advance of economic freedom. From “About the Index,” The 2015 Index of Economic Freedom by The Heritage Foundation.

If the Index’s target audience would not bat an eye at this statement, certainly ordinary citizens in countries and regions throughout the world will find it ridiculously contrived. Such an assertion is not only contradictory to widespread sentiments of economic security, but also to current studies and research produced by the very institutions and think-tanks whose works have informed the Index. 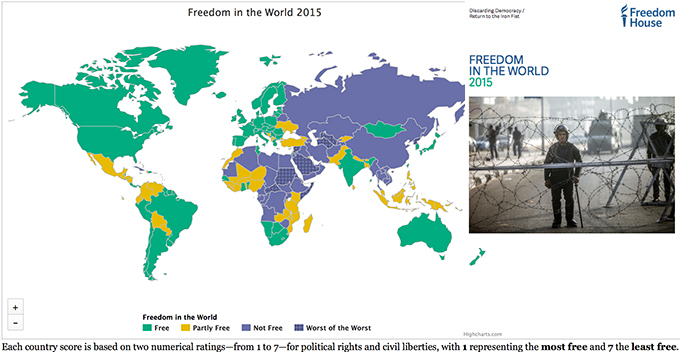 In contrast to the Index of Economic Freedom, Freedom in the World is committed to the spread of democracy and as such its focus is political rights and civil liberties. Its methodology, based upon the Universal Declaration of Human Rights, evaluates «real-world rights and freedoms enjoyed by individuals, rather than governments or government performance per se». In spite of distinctive objectives—economics on the one hand, politics and society on the other—the indicators and trends explored in both indices are so interrelated as to be inseparable. Discussing «the relationship between economic freedom and democracy or political freedom», The Heritage Foundation mentions having drawn from a past Freedom in the World report to postulate: «those countries that are more economically free also are more politically free and have higher levels of civil liberties than those countries with less economic freedom». That such diametrically opposite conclusions should be drawn from many of the same indicators and data sources is, needless to say, perplexing.

Read more about Tunisia Economy.
See more from the 2015 Index.

In Tunisia, a recent study on poverty by the Centre d’Etudes et de Recherches Economiques et Sociales (CERES) and the Université de Tunis renders laughable The Heritage Foundation’s sweeping observation about poverty and prosperity in the world. Among several Tunisian news outlets that have reported on the study1, Maghreb Emergent offers the most detailed information: of 5,300 households interviewed in different regions throughout the country, 93% indicated that, economically and socially, living conditions were better before the 2010-2011 revolution. Lower- and middle-classes left to the whims of an unpredictable market has contributed to increasingly unequal wealth distribution where 10% of Tunisians hold 80% of the country’s resources, an explanation, the article suggests, for voter abstention in the country’s first democratic elections. Perhaps the study’s most remarkable finding is that the country’s ‘nouveaux poor’ make up about 30% of an estimated two million poor Tunisians.2

From a socio-political perspective, an index that measures “economic freedom” can be misleading. Certainly a significant factor in the discrepancy between The Heritage Foundation’s lofty assertion about poverty and prosperity and the economic, social, and political realities that ordinary citizens face are contrasting interpretations and applications of the word “freedom.”

Ironically, many Tunisians who experience what they perceive to be a lack of economic freedom recognize institutions that embrace free-market ideals as culpable for or complicit in economic insecurity. Describing Tunisia’s economic crisis, the same Maghreb Emergent article cited above posits that assistance from development agencies has been a lifesaver and also «exacerbated Tunisia’s dependence upon international politico-financial circles».

Tunisia’s economy was one of the best-performing in the region before 2011. Rapid poverty reduction was accompanied by significant improvements in the main human development indicators. On the basis of these achievements, Tunisia was heralded as a role model for other developing countries by the International Monetary Fund and the World Bank. Similarly, the World Economic Forum repeatedly ranked Tunisia as the most competitive economy in Africa. From Chapter 4 of the 2015 Index of Economic Freedom: “Cronyism, Corruption, and the Arab Spring: The Case of Tunisia“

Large-scale purveyors and promoters of free-market economics are indeed formidable politico-financial forces: they are temporally and geographically well-established and broadly-networked. For this year’s Index of Economic Freedom, several World Bank economists who have carried out a great deal of research work on Tunisia contributed a chapter on “Cronyism, Corruption, and Social Exclusion: The Case of Tunisia.” Additionally, the Index features an Heritage Research essay on “Advancing Economic Freedom Through the World Bank” in which its authors appeal to the new president of the World Bank to dispel his «anti-growth, anti-free market view» and «firmly place the advancement of economic freedom at the core of the bank’s development mission».

Given a long history in the country—even throughout two decades of cronyism, corruption, and social exclusion that the World Bank has extensively researched, documented, and condemned since 2011—and the vast resources that free-market and growth-focused institutions represent both in terms of financial assistance and expertise, devising and implementing an unconventional route of reforms not based upon foreign assistance in the form of loans is, to say the least, a daunting task. Among the most difficult and controversial questions facing politicians, experts, academics, and activists engaged in implementing post-revolutionary reforms in Tunisia is how, and to what extent, agencies such as the World Bank and IMF will play a role in Tunisia’s economic stabilization.

Notes
1. The study itself does not appear to be available online; Nawaat has contacted CERES and the Université de Tunis to request a copy of the report.

2. No information has been provided specifying the definition of and indicators of the “poor” and poverty in Tunisia.