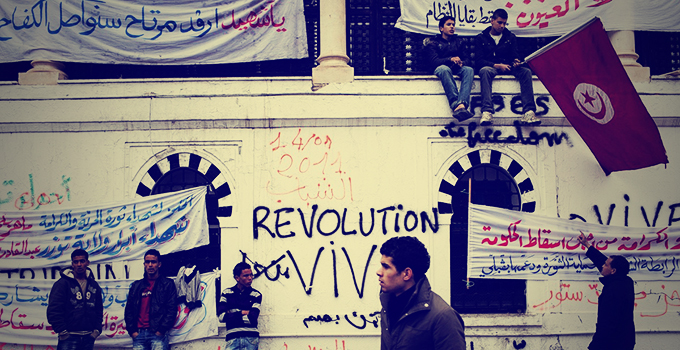 Often forgotten are the errors and successes particular to the most significant change in Tunisia’s recent history, the event that is generally referred to as the «revolution» or «political transition.» The restoration of facts about what unfolded between 17 December 2010 and 14 January 2011 has yet to be fully realized due to the obligation of confidentiality of those in power. Now, four years after the fact, we look back on the greatest popular occupation of political space, the Kasbah sit-ins 1 and 2, and take stock of errors committed and gains made.

On 14 January 2011, the departure of then-president Ben Ali was announced. Prime Minister at the time Mohammed Ghannouchi, as well as Abdallah Kallel, and Foued Mbazaa appeared on national television promising the government’s continuity of power. Many youth, grasping that this was the end of dictatorship, refused to swallow the pill. Everything began when one young man,from Menzel Bouzaine, asked, «Why not leave for Tunis on foot?» The proposition circulated on social networks invigorating a wave of solidarity throughout the country. Safouen Bouzid, a young activist from Bouzayene, recalls,

We sensed the danger of the revolution’s reversal. That’s why we came up with the idea to occupy the Kasbah, symbol of political power. The next day, we began the march. Many cities followed us and we ended up taking buses and cars in order to arrive at our destination on the same day.

The space occupied was not random. Setting up camp in the square before the Kasbah meant the appropriation of a confiscated political space, was an invocation of democratic ideals where there is room to question those in power and the guarantee that popular demands are taken into account. Though the sit-inners lacked fleshed-out ideas and a cohesive strategy, the will to confront the ogre in his cave was a source of incredible energy that united youth who flocked to participate in the movement.

Outside the Kasbah, tents were erected, food was circulated, and graffiti, slogans, and songs decorated the scene. People voiced their demands and discussed methods of organization. Independent activist Azyz Amami remembers,

It was an extraordinary movement of solidarity and self-management throughout which we experienced the complete absence of authority. People displayed exemplary behavior during this period. For instance, no decision passed without universal agreement that was facilitated by individuals who coordinated between groups.

On 27 January 2011, the Kasbah 1 sit-in prodded Ben Ali’s former Prime Minister Mohamed Ghannouchi to change his first government. But the occupiers returned to the square soon thereafter, in spite of repression, to force Ghannouchi to step down. On 3 March, Foued Mbazaa announced the nomination of Beji Caid Essebsi to the head of the new government and introduced a Roadmap for the country’s next legislative elections. On March 4, the Kasbah sit-ins essentially came to their end. In the meantime, a slander campaign was brewing in the media. «Enough anarchy and chaos! Go home!» Such was the slogan of another camp of Tunisians who wanted to conserve what comforts they had inherited under Ben Ali’s regime. 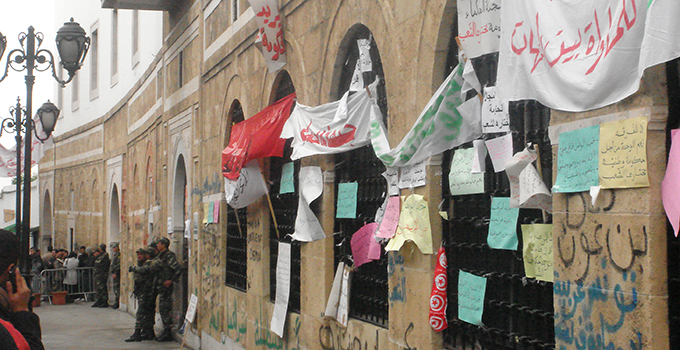 Though the culmination of the Kasbah sit-ins bore some semblance of compromise, barricades remain in the square blocking off foot-traffic. In the months and years that have followed the movement, some have tried in vain to regain the space. No one has succeeded except those affiliated with the government. Ever-vigilant security forces squelch any attempts to occupy the square, and so the re-appropriation of that space was finished for the «revolutionaries.»

Now, after four years of persistent activism, those who catalyzed the fall of the dictatorship look back on events with a new perspective. They are able to draw lessons from their errors and successes. Even as the Kasbah sit-ins remain widely idealized, many have reflected on the weaknesses and errors that constituted the principle factor in the movement’s «failure.» And with good reason! A lack of strategy and communication, both internally and externally, during the first and particularly second sit-in, resulted in a susceptibility to manipulation from without. As journalist and political activist Amane Allah Mansouri reflected:

After the lofty Kasbah slogans that had united us, we began to see divisions. «Laic Tunisia» and «Muslim Tunisia» witnessed their first break from the youth of the revolution. Conflicts of interest surged amongst those who represented the bourgeois and the middle class (the Kobba), and those who were anti-system and hold radical positions with regard to the past (the Kasbah). Finally, there was the abundant investment of political parties that began, very early on, their electoral campaigns and took the place of youth in negotiating demands. 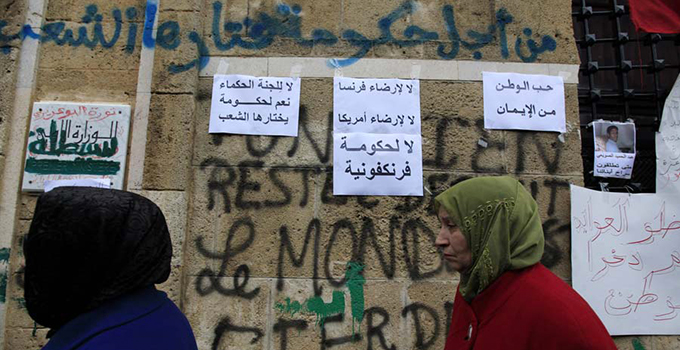 According to lawyer Khaled Aouinia, such manipulation was orchestrated by the reformist and reactionary forces close to the Ben Ali regime. Hidden though they might have been within new structures, the old monsters of the dictatorship continued to pull strings and succeeded in stifling any significant popular counter-attacks on the established forces of power. Aouinia muses,

When the young people of the revolution decided to occupy the space associated with the Prime Minister and to install a revolutionary government, the reformist forces, namely the Commission for the Realization of the Objectives of the Revolution, Political Reform, and Democratic Transition headed by Yadh Ben Achour, arrived on the scene. This committee wanted to absorb the demands of the revolutionaries and recruit dignitaries of the Kasbah to calm things down. The Association of Lawyers, who were a cover for the Islamists, pushed the Kasbah towards constitutional elections, and finally the UGTT, which was a facade for the liberals and former RCDists, asked movement’s youth to relinquish their place to the political «professionals.» Are these not the same forces that hold power today?

If the major political forces succeeded in controlling the Kasbah, it was due to inadequate management on the part of youth who were the driving force of the occupation. Indeed, confusion and personal conflicts were factors in the movement’s extinction. Azyz Amami acknowledges that

our failure was the over-estimation of our real capacities. At the beginning of the Kasbah 2 sit-in, we pushed political parties through their young activists. Those same parties later pushed us aside using the fateful argument of political experience. At that time, the individuals who coordinated decision-making estimated that they weren’t capable of negotatiating with those in power and implementing the change at the Kasbah. Whereas they were at the Kasbah because the revolution is the tangible expression of the political failure of these same political parties and unionists.

By now many participants have had time to ruminate these errors. What remains is to shed led upon the movement’s successes. «Through the sit-ins we imposed an ethics threshold which all political parties had to observe,» Amami told Nawaat. But that wasn’t all; the youth who took part in the movement demonstrated extreme democratic creativity that surpassed old forms of power. Following the examples of the May 15 Movement, Occupy Wallstreet, and demonstrations in Europe, the youth of the Kasbah movement took part in addressing contemporary political issues and challenging the sort of modern-day power oligarchy that exists in countries throughout the world.

The structure and ideals of the Kasbah sit-ins definitively broke the myth of the political hierarchy, in the image of a traditional system and its traditional adversaries. Some deem the horizontal participatory structure of the Kasbah movement its Achilles’ heel. For this reason, the real struggle for the youth of the revolution consists in proving that this revolutionary momentum has gained participants the experience of effectively confronting the political power backed by private money and individualist interests that deviate from the common interest.