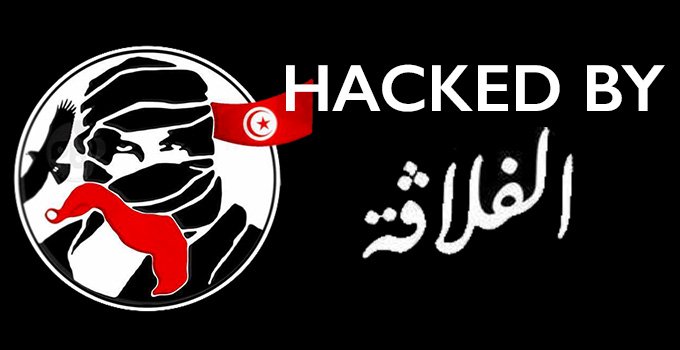 In the past few days, several Tunisian hacking attacks targeted governmental and media websites. Following the Charlie Hebdo attack in Paris, the same group of Tunisian islamists hackers, that is called “Fallaga”, claimed the responsibility of the #Jesuispascharlie cyberattack that targeted more than 150 French websites. The group had also hacked the Tunisian Journalists Union website after it expressed its support for the French satirical weekly newspaper, Charlie Hebdo.

We will refer to one of the most active member in the group who has been interviewed for this article as Lazhar.

We are the electronic resistance, we are the grandsons of the Fellaghas, an extension to the real ones, Lazhar, in his twenties, defines the group.

Former reports announced that the hacking group is made up of 60 members. In fact, the group is much larger that declared according to Lazhar:

«The group consists of more than 200 people, and we consider that whoever has the mentality of the Fellaghas, he is considered as a Fellag».2

«Being one of the most important causes», the group of hackers supports the cause of Palestine. The islamist hacktivists defend few causes which are: defending and protecting islam, defending the nation and making public all kinds of corruption.

The Hacking of ATI

In the recent few days, the group claimed the responsibility of hacking several governmental websites, such as the Ministry of Culture and the Ministry of Transport. The official website of the Tunisian Internet Agency (ATI), the former national Internet Service Provider.

The group usually records its operations and then shares them via a Youtube.

According to Sami Ardhaoui, hosting department engineer at the ATI, «the website of the ATI had been hacked several times.The hackers were not identified».

«We hacked the ATI website because its security was so vulnerable», Lazhar told Nawaat, adding that ATI «website since its foundation has never been updated; ATI’s developers did not check or change the website. It has been hacked twice; once they asked us for technical assistance». This claim, however was denied by the ATI engineer. The Hackers, in the case of hacking the ATI’s website, got access to the website interface and no personal data were damaged; these technique is commonly used by this group of hackers and it is called website defacement.

The hacktivists use vulnerability scanner tools like Kali Linux, Jooscan, Nikto, Uniscan, Wpscan and other tools that are designed by the group.

The group of Hackers was reported as being responsible for pirating email addresses, websites and Facebook accounts of some Ennahdha’s top leaders, such as Abdelfattah Mourou, Samir Dilou and Rached Ghannouchi.

We hacked these websites because they represent false Islamists, they are not islamists…These websites have nothing to do with Islam, they just use the name of Islam to reach political goals, Lazhar told Nawaat.

The hacktivist said that the group would be vigilant to any threat that comes to Tunisia even if it comes from “ISIS”. They formerly stated that they are searching for information regarding a video that was filmed in Raqqa showing Tunisian Jihadists claiming responsibility for the assassination of two Tunisian politicians in 2013, Mohamed Brahmi and Chokri Belaid.

The group was reported to be responsible for hacking the official website of Anonymous Tunisia. On November 19 November 29, 2014, Anonymous published 16 invoices that were attributed to the presidency’s expenditures.

This is the second time since the revolution that such powerful documents were “leaked” from the presidency. The first leaked document goes back to 2013, when a book, entitled “The propaganda apparatus under Ben Ali: The Black Book”, was leaked. The book was produced by President Moncef Marzouki’s office.

Lazhar denies any existence of Anonymous Tunisia. «In the past, Anonymous was made up of two unexperienced hackers who were pirating non Tunisian websites», he said. «The group then was split, and only 13 to 16 year-old-boys remained».

Lazhar thinks that Anonymous was used for political reasons when they published the “wrong invoices”.

We hacked the website because they shared documents belonging to Moncef Marzouki in a sensitive time. In that way; first, they were supporting the former ruling party, the RCD; second, for the fake released documents.

Lazhar also said that the computer of the presidency is disconnected of the internet, unless someone gets access to the computer and obtains the data. «Why the so-called Anonymous.TN didn’t publish the video of the operation online?»