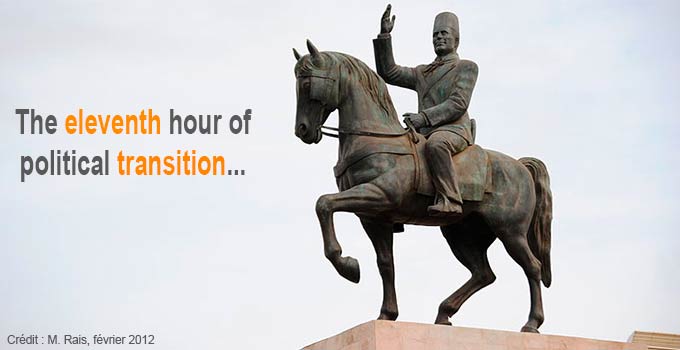 I have dedicated my life to the independence of my country, but also that it should look towards the West. Today, I am concerned to see certain segments of our population look in another direction. I will do everything I can to stay the course. President Habib Bourguiba quoted in Bourguiba, Ben Ali, and Islamists

One week ago, many Tunisians went to the polls and cast their votes dutifully and dispassionately, uninspired by the profusion of posters and slogans, extravagant campaigns and lofty promises of the country’s twenty-seven presidential candidates. At the eleventh hour of political transition, the bitter result of brewing tensions throughout the electoral period is a polarization embodied and exploited by the two final presidential candidates, Beji Caid Essebsi and Mohamed Moncef Marzouki, who won 39.46 percent and 33.43 percent of votes respectively in the November 23 election. In anticipation of the December 14 runoff, both candidates have pursued “political marketing” strategies consistent with the first round of presidential elections that were rich with image-heavy rhetoric and deficient in debates concerning the profound and day-to-day socio-economic issues facing Tunisians. 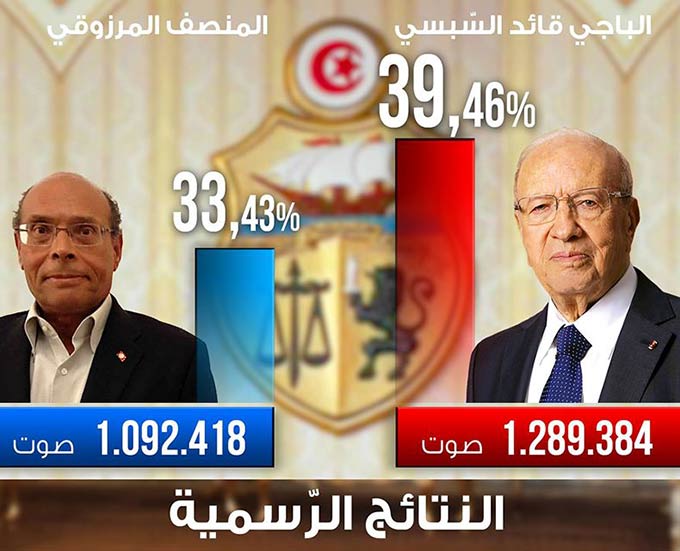 Visual display of votes cast for the two primary presidential candidates in the November 23 elections. Posted on Essebsi’s Facebook page on Tuesday, November 25.

…these insults, on one side as the other, to the supporters of the political adversary, are indicative of a lack of tact and a failure to meet the constitutional obligation to be the representative of all Tunisians. In the meantime, the lessons of this first round [of presidential elections] are worth recalling. Between the high rate of voter abstention, the demobilization of youth, and a polarization that is the result of fear-based campaigns, the challenges are different for the «anti-Troika» camp and the «anti-former regime» camp. But clearly both candidates prefer to fuel their discourse with these dichotomies. Yassine Bellamine, How to “Rock the Boat” of Fragile Democracy

Essebsi was interviewed on Monday by Jean-Jacques Bourdin of RMC radio. Posted on his Facebook page, the six-minute dialogue has been widely circulated throughout national and foreign media outlets. Essebsi’s assertion that Marzouki’s campaign and electoral-base were driven by Islamists and Salafi jihadists, his prescience about the division of the political landscape into Islamists and non-Islamists, his projection of the criticism «being of the past regime» onto his rival for the latter’s role in the Troika government that is widely perceived to have exacerbated the country’s economic woes, are potent affronts to his political adversary but even more so to plurality and the ideological diversity of Tunisians–all of whom he is in the running to represent.

…It must be known that those who voted for Mr. Marzouki are Islamists, those who have positioned themselves at his side [are]…the leaders of Ennahdha…the party that is even more extreme than Ennahdha…also the Salafi jihadists and…the Leagues for the Protection of the Revolution (LPR), who are all violent parties…

Certainly, if we didn’t have 51 percent, it’s because there were certain parties who support Nidaa who didn’t come to the elections, they didn’t mobilize…

…Unfortunately, there will be a division into two, the Islamists on one side, and then all of the democrats and non-islamists on the other.

He was the President…designated by Ennahdha in the Troika … now in these elections…all of these Islamists have stood beside him … He never surpassed ten percent in the [pre-election] polls, now he has thirty two percent, I don’t know how he climbed to these numbers if he didn’t have all of these people behind him.

Essebsi on France 24 – A bit of Bourguiba, a dash of Mitterrand

In a subsequent interview with France 24, Essebsi elaborated on some of his statements from the day before. Conducted in Arabic, the seventeen-minute exchange exhibits the eighty-eight year old’s wit and artful discourse infused with expressions in French–«la patrie avant les partis» (“the country before political parties”) and «je suis un homme serein» (“I am a peaceful man”), a Tunisian proverb–«el 3in 3morha ma ta3lou 3al 7ajeb» («the eye does not raise higher than the eyebrow») implying that the will of a president’s does not supersede that of the people, and humor (upon the suggestion that the Nidaa Tounes constituent is a “mosaic” of diversity, Essebsi interjected, «you mean the radio station?» Asked about the statement that «Bejbouj» is not a man of the past but of the future, Essebsi aptly cited a debate between Francois Mitterrand and Valéry Giscard d’Estaing in which, upon the latter’s challenge “Vous êtes un homme du passé” («You are a man of the past»), the former replied, “vous soyez devenu un homme du passif“ («You have become a man of passivity»). Notably, the context of Mitterrand’s famous ripost was a debate preceding the second round of presidential elections that Mitterrand won on May 10, 1981.

In a matter of days, Essebsi has consolidated the message of his campaign and fleshed out his public persona in the image of President Bourguiba (whose remark, cited above, resonates so soundly with Essebsi’s discourse in the past week) most recently in his condemnation of Islamists who were «Bourguiba’s most determined adverseries,» though, as Nawaat contributor Yassine Bellamine justly points out, “there exist Islamist democrats just as there exist non-Islamist non-democrats.” Essebsi is needling “one of the most dangerous issues that exists in Tunisia, where the question of political Islam is still highly polemical” and is so undiscerningly treated in mainstream Western media (note, for example, a Le Figaro article posted on Essebsi’s Facebook page which epitomizes mainstream media’s ill-examined assumptions and generalizations about Islam, political Islam, Islamism, the ‘Arab world,’ etc.).

After the widely-circulated Radio Monte Carlo interview, a cinematic version of present fear-mongering machinations, Essebsi’s campaign video, was posted on the Tunis Tribune Facebook page. The two-minute clip, which “discusses the phenomenon of the recruitment of young Tunisians to the inter-religious conflicts in Syria and Iraq,” shows a truck full of young jihadists, recognizable by a billowing black ISIS flag, who dash off the vehicle and into the dusty, destitute remains of an abandoned village amidst gunfire. One young man is shot through the heart and falls to his death beside the singed skeleton of a car where another encounters the young man’s body and, strewn beside him, his Tunisian passport. In the next scene, the young man’s mother receives news of his death and cries in the arms of her other, stone-faced, son. Subsequently both mother and son wait solemnly in line outside the white and blue school buildings designated as Tunisia’s voting centers. Inside, the woman smiles as she marks the box next to her preferred candidate, Beji Caid Essebsi, and drops her ballot into the box as the words «Our destiny in our hands» fade into the foreground.

For three years, much of the print and broadcast media have been complicit in maintaining a climate of fear and paranoia based on misinformation … these three years have been crowned by victory–not an electoral victory, but [one of] fear… Wejdane Majeri et al., In Tunisia, the Return of the Former Regime is Not a Rumor

Perhaps it is not astonishing that platforms, programs, and debates of the country’s first «free» and pluralistic presidential elections should be wanting for depth and quality, or even a place in the political sphere. And, as it is often argued, relative to other so-called Arab Spring countries, Tunisia has accomplished a great deal during the four years of political transition–not the least of which are a new constitution and, soon, a democratically-elected new government. On the other hand, the prevalence of below-the-belt jabs and mud throwing, the remarkable lack of attention to the very social and economic issues at the heart of uprisings that began in 2008, are certainly not features of a political scene that promises the effective leadership or imminent reforms for which Tunisians have so hoped. Two weeks from the second and final round of presidential elections, Essebsi and Marzouki have set the tone for the conclusion to the country’s democratic transition, and with the inertia of fear-mongering electoral campaigns and so little time remaining, neither politicians nor media networks are likely to emphasize anything other than divisive themes of RCD versus Troika, Islamists versus non-Islamists, democrats versus non-democrats, all in the name of carrying Tunisia into the stability and security that both candidates claim to pursue and for which neither presents a convincing, reassuring plan of action.