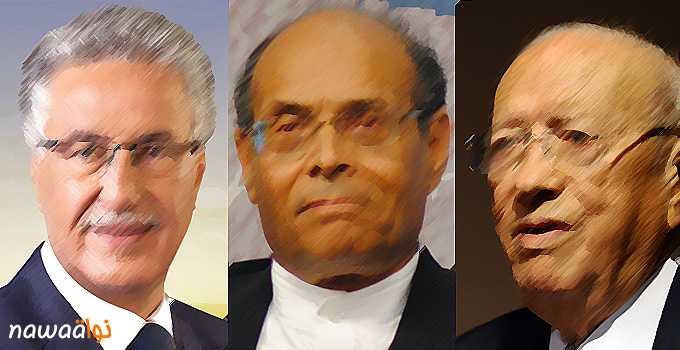 In Tunisia’s capital, days before the November 23 presidential elections, the three candidates whose faces appear most frequently across media outlets and whose names are mentioned most often in conversation are Beji Caid Essebsi, Moncef Marzouki, and Hamma Hammami.

Essebsi, riding on the coattails of Bourguiba 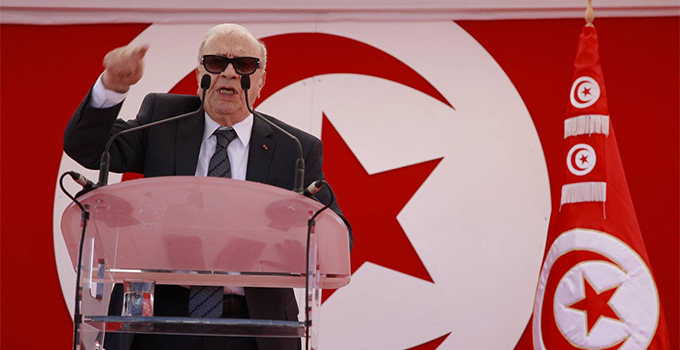 Streets of the capital are dressed with billboards of a twinkle-eyed Beji Caid Essebsi, hands raised toward passers-by insinuating conviction and vitality and the idea that, in spite of his age, the eighty-eight years old candidate is yet vigorous and spirited enough to represent Tunisians as head of State.

«Nostalgia for clear leadership has largely overwritten memories of Bourguiba’s authoritarian, if frequently enlightened, rule and has been fully exploited by Nida Tounes and Essebsi. A huge portrait of the former president adorns Essebsi’s office in Tunis and his face featured on Nida Tounes’s posters and campaign literature,» notes Dr. Michael Willis in an article on the implications of Revolution, Counter-Revolution, and Democracy in Tunisia for Europe.

For some, Essebsi’s age and positions within the governments of both Bourguiba and Ben Ali are the qualities of an experienced leader who evokes nostalgia for the past; others associate Nidaa Tounes and its founder with nepotism, opportunism, a restoration of the status quo the overturning of which was the objective of uprisings that began in 2008. Stretching an association with Tunisia’s former dictators to a more universally infamous despot, Journalist Bassam Bounenni portrays Caid Essebsi in the footsteps of Louis XVIII. In Nawaat’s latest political review, journalist Seif Soudani comments, «In reality, Nidaa Tounes has already adopted several practices characteristic of authoritarian regimes, such as the ad hominem denigration of human rights defenders.» 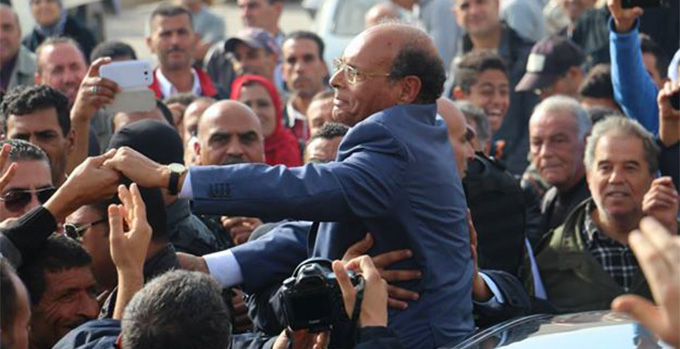 In spite of smear campaigns that have run 24/7 over the past three years, he is far and away the person for whom I have the most respect and admiration … It is the consistency of his discourse over the past thirty years that render Moncef Marzouki the perfect candidate to whom one can entrust the [objectives of the] revolution. TunEconomist, Presidential Elections 2014: For Whom I Will Vote and Why.

It is true that Marzouki has been a source of comedic inspiration in Tunisian media, ever the protagonist of entertaining anecdotes in the news; in February, an illustration on La Presse de Tunisie captured the «Marzoukian miracle» by which Mejri Jebri remained in prison although he had been pardoned by President Marzouki; in January, his «apocalyptic presentation of Tunisia’s precarious water situation» was diffused on the radio and online; most recently, reports told of his apparently poor etiquette at the polls in Sousse where he apparently skipped the line to cast his vote. Far from being a mere comedic figure, Marzouki inspired a great deal of hope at the beginning of his term; a figure who «carried the ideal of revolution», Marzouki is now contemplated by some with disappointment, regret, and a sense of betrayal regarding the course of his presidential career: «He willingly deviated from the path that he himself had traced for us in 2011», explained Houssein Ben Ameur in the Huffington Post; similarly, journalist Farhat Othman reflects, «Deceived by his character and activism before the revolution, I joined CPR at the end of 2012 believing I had found in his party the values that motivate my own activism.»

Hammami of the far Left 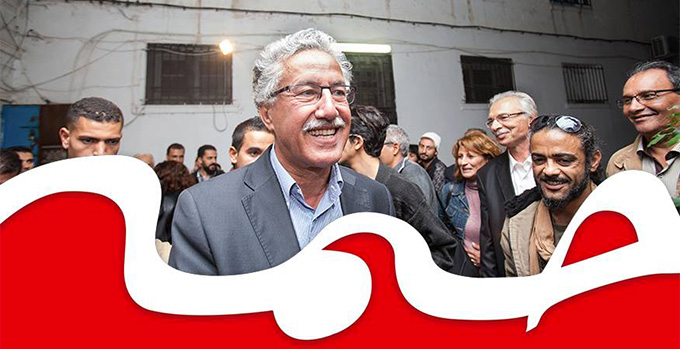 There has been an impressive proliferation of discussions in the media regarding Hamma Hammami since his televised interview on «La Route vers Carthage.” «Hamma’s candidacy is far from symbolic and his chances [in the election] are more and more real, especially after his most recent appearance on the private station Nessma TV» Kapitalis reported, extending the praise to Hammami’s party, the Popular Front: «The [party’s] management of relations with BCE’s party, their participation in the sit-in at Bardo following the second assassination…of Mohamed Brahmi, the role they played throughout the National Dialogue, the electoral campaign for the legislative elections of 26 October 2014 and its results show a certain maturity in the political behavior of the «unified» Tunisian Left.» In contrast, left-wing activist and Popular Front member Hamadi Aouina insists:

Nothing on the infernal mechanism that drives inflation nor on those responsible for this organized inflation. Nothing on urgent measures to eradicate unemployment, among the main causes of the uprising in winter of 2010-2011. If only he had dazzled us with «the program» to which he alluded to indicate that the party’s «experts» were busy tending to the pressing issues at hand. Hamadi Aouina, Ode to Mediocrity.

Deficiency, mediocrity, obscenity, and the general falling short of democracy 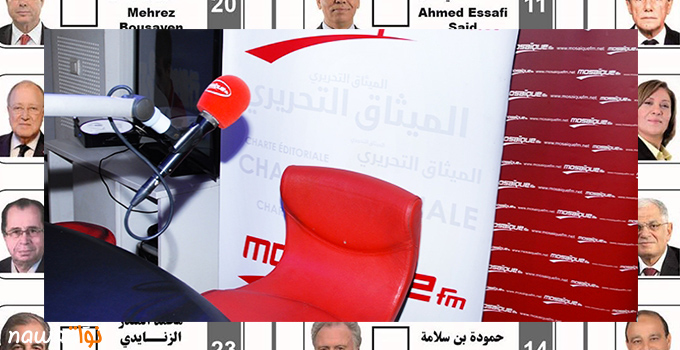 The greatest enemy of what we call democracy is political theater* … We have missed this unique opportunity to engage in serious debates. We passed directly to the theater. Actors from the archives, from the ballots, or from the great capital have monopolized the scene. They chant slogans and speeches and the public applauds or throws tomatoes. Slogans, nothing but slogans! Not the slightest trace of a real social project, elaborates “Z”, pen-name of the famous Tunisian cartoonist blogger in his recent article From the Front or the Back?

Far from being entertained by the «political theater» of electoral campaigns, many Tunisians observe the clamor of politicking and outpouring of candidate-specific endorsements and criticisms as a stark contrast to the lack of distinctive party platforms, well-founded arguments, and meaningful discussions and debates concerning tangible economic and social programs. If deficiency and mediocrity reflect a falling short of fundamental democratic principles and practices, obscenity is perceived as counter-productive to the process of democratic transition, indicates Nawaat Journalist Nadia Haddaoui. Provoked by presidential candidate Mustapha Ben Jafaar’s statement that he «respects the Tunisian woman who washes clothing and the Tunisian woman who shapes her eyebrows» Haddaoui observes,

After the advent of «wishful thinking» in 2011, the politico-media cycle that has emerged beckons the mechanism of «obscene thinking» that thrived under Ben Ali … the language of political discourse is telling: a lack of arguments and economic solutions, politics and media unconcerned with ethics or morals. Nadia Haddaoui, A Politico-Media Cycle That Descends Into Obscenity.

Haddaoui’s point is not to condemn an obviously sexist comment made by a respectable public figure (president of the ANC until last month’s elections) and presidential candidate, but to point out the media’s response to such a statement, and broader yet, state institutions’ lack of traction in the issue. For recently established national authorities such as the HAICA and ISIE, the 2014 elections represent a first real trial of their legitimacy and by extension a measure of transparence and accountability that signal a clear distinction from the practices of the Ben Ali regime. «In the present state of democratic denial», Haddaoui wonders, «how can we hope to invent an alternative way of undertaking politics and producing information?» With the results of legislative elections last month, the internationally-touted «secularist» victory of Nidaa Tounes over the Islamist Ennahdha party, there remains amongst many Tunisians a good deal of mistrust and uncertainty as to whether Tunisia is in fact deviating from decades of top-down governance, or if it is merely treading water, not only falling short of democracy but falling back into pre-revolution political status quo.

…the reestablishment of ties with regional allies, calls to expel foreign television networks in the name of the struggle against terrorism, the will to derail transitional justice, the return of the old familiar faces of nepotism, a dynastic, business-oriented majority party…restoration is a subtle process which, if unchallenged by resistance, could rapidly overtake the bringers of consensual reformism. Seif Soudani, Democratic Restoration.