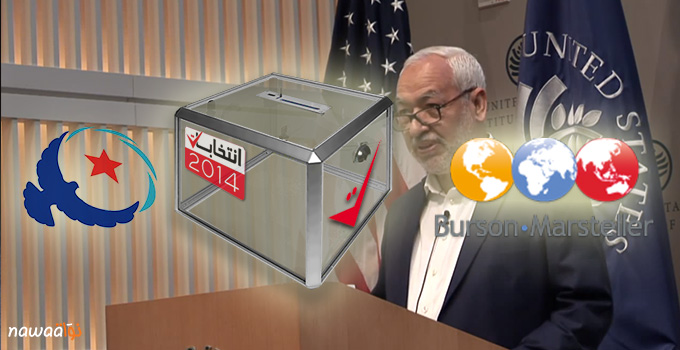 Ghannouchi’s ‘Apolitical’ Visit to US Institute of Peace, Yale, and Columbia

Ennahdha party leader Rached Ghannouchi landed in Washington, D.C. last Monday, where he commenced his US visit at the US Institute of Peace before continuing on to Connecticut and New York to speak at Yale and Columbia Universities three weeks from the country’s legislative elections. Media reports tend not to concur with Ghannouchi’s interpretation of the visit as «cultural and scientific, and not political.»

I was keen to come to Washington despite being engaged in a busy election campaign, in order to address this enlightened elite at a critical moment for our world. Our progress requires our unity in the defense of freedom and democracy and against the return of dictatorship and the spread of terrorism. Rached Ghannouchi, Transcript of Lecture at the US Institute of Peace.

That Ghannouchi’s US visit and lectures —the typical narrative promoting Ennahdha’s central role in the success of Tunisia’s democratic transition- exist outside the realm of electoral campaigns appears improbable; the party leader’s trips to China and the US take place in the midst of outreach campaigns in Italy, Germany, France, and about a week after Ennahdha was listed as the «Foreign Principal» in an agreement with «one of the world’s largest PR companies» Burson-Marsteller.

The news has been well circulated since the 22 September publication of an Al Monitor article, Tunisian Islamists hire US lobby shop, featuring a link to the document that was filed to the US Department of Justice.

Clients often engage Burson-Marsteller when the stakes are high: during a crisis, a brand launch or any period of fundamental change or transition. They come to us needing sophisticated communications campaigns built on knowledge, research and industry insights. Most of all, clients come to us for our proven ability to communicate effectively with their most critical audiences and stakeholders. From the Burson-Marsteller «About Us» page.

Though its name might not be familiar to many, Burson-Marsteller and its impressive list of clients and cases evoke some of the greatest scandals and controversies that have occurred over the past couple of decades. As described in The godfather of modern PR Harold Burson on moral responsibilities and controversial clients, the company and its co-founder are considered pioneers in reputation and crisis management for governments and corporations. Some of its most infamous projects were carried out on behalf of Argentina after the Dirty War, Nigeria for the Biafran genocide, and Indonesia for East Timor; Nuclear and chemical disasters on Three Mile Island and in Bhopal respectively; Philip Morris and the National Smoker’s Alliance, Monsanto, Blackwater, Romanian dictator Nicolae Ceausescu, American Pete Peterson of the Fix the Debt campaign.

“Footnote : “Political activity, ” as defined in Section l(o ) of the Act, means any activity which the person engaging in believes will, or that the person intends to, many way influence any agency or official of the Government of the United States or any section of the public within the United States with reference to formulating, adopting, or changing the domestic or foreign policies of the United States or with reference to the political or public interests, policies, or relations of a government of a foreign country or a foreign political party.”

From Exhibit A to Registration Statement (Ennahdha’s agreement with Burson-Marsteller), p. 4

This agency was recruited by our office abroad in order to speak and present the party to Tunisians and foreign policy-makers. This contract has nothing to do with elections, even if the approach equally aims to promote the electoral process. Ennahdha spokesperson Zied Ladhari quoted in Electoral Campaign: Copied Video, Stolen Photo, American Promotion, Ennahdha Responds.

Tunisia’s Ennahda movement has hired public relations giant Burson-Marsteller to boost its image in the United States ahead of elections that could see the Islamist party return to power. Julian Pecquet, Tunisian Islamists hire US lobby shop.

Ennahdha’s lack of transparency around its agreement with Burson-Mersteller gives rise to inevitable suspicion that the transaction, contrary to encouraging «free and fair elections in Tunisia» might in fact undermine them. Ambiguity around the financial aspect of the deal (“Fees and expenses to be determined at a later date,” reads the official registration document) is a particular concern after political parties’ financial mismanagement in past elections.1 What or who, for example, is the source of funding? In what currency will payment be made? If the transaction entails foreign currency, what are the payment procedures? Other questions pertain to the designated intermediary in charge of overseeing such logistics, Mr. Ifhat Smith of the Ennahdha London Office. Smith has previously done work on an advertising campaign Proud to be a British Muslim organized by the group Islam is Peace in 2007.

Dubious though the agreement may be, it cannot be called surprising considering the extent to which Western perceptions of the Middle East, the ‘Arab world’ and Islam have been and continue to be2 warped by ignorance and propaganda. Ennahdha has likely selected well if it is to take on mainstream media, and at the very least made a wise decision to assign the project to a separate organization as its own PR outreach has been pointed out as faulty and unoriginal.3

A New York Observer piece by the CEO of 5WPR, «one of the 25 largest PR firms in America», spins the agreement in question as an affront to Israel in APOCALYPSE NOW – Burson-Marsteller Rejects Israel as a Client; Accepts Muslim Brotherhood. Conveying Burson-Marsteller’s «appetite for controversy» and Ghannouchi’s pro-Palestine, anti-US fervor, the author’s own platform is clear: «Many in the PR industry have worked with Middle East interests that harm the West.»4 An addendum to the article describes a discussion with Burson-Marsteller Worldwide Vice president Jano Cabrera in which «Mr. Cabrera was asked, “Yes or no, would you represent Israel?”. The author concludes in a subsequent article that, whatever Burson-Marsteller’s policy may be regarding Israel, «In signing Ennahdha, Burson has made its choice.»

Whereas Ghannouchi’s US lectures last week offer an idealized version of Ennahda’s role in Tunisia’s singular success among Arab Spring countries, and various reproductions of this romanticized version6 of democratic transition can be repetitive, wearying, and simplified, they are at least partly if not largely prompted by abundantly more repetitive, wearying, and simplified information and perspectives ever perpetuated in and by Western mainstream media. Certainly a more interesting discussion lies somewhere in between or wholly removed from such idealized electoral campaign renditions and, at the opposite end of the spectrum, deep-seated, close-minded assumptions and stereotypes. In this vein, a series of articles by Middle East Monitor writers on contemporary political Islam are an example of sober analysis based on research into history, politics, and current events, and are certainly worth reading:

“…ISIS and the US-led coalition lining up against it came about as a direct result of the Western-approved oppression of moderate Islamic movements in the Arab world. It seems that the administrations in Washington, London, Paris and Berlin, as well as Riyadh, Abu Dhabi and Cairo, have not learnt from previous experiences. Their unlimited support for despots led to the emergence of Al-Qaeda and now their coup against the people’s revolution has brought them ISIS; when will the West learn?

The Western and Arab media have engaged in the struggle with all the means at their disposal, portraying all Islamic movements as extremists. The message is clear: there are no moderate Islamist groups and the Salafist jihadist groups, including Al-Qaeda and ISIS, all emerged from moderate Islam, which is represented by the Muslim Brotherhood; ergo they are one and the same. We need to clarify this misconception with a look at the ideologies of the Muslim Brotherhood and the Salafist jihadist groups, the most recent of which is ISIS, which also requires a look at Wahhabi Salafism…”

In Tunisia, Ennahdha’s agreement with Burson-Marsteller provokes important questions about the nature of services provided, and, if the transaction is formally determined to be within the scope of an electoral campaign, whether or not it complies with standards for «free and fair elections.» On a broader scale, the agreement evokes the complexity of MENA-Western relations (note, as indicated above, how Israel can even be pulled into the discussion). That Ghannouchi should refer to his most recent trip abroad as apolitical and that Ennahdha’s decision to contract a controversial American public relations company should be designated as unrelated to elections this month might be seen as the party’s ‘diplomatic’ solicitation of the support of its friends in the West. As scholar Robin Wright, however, gravely pointed out to Ghannouchi during the discussion at the US Institute of Peace, given the likelihood of a drawn-out continuation of the so-called war on terrorism7, Ennahdha’s «making the case [for foreign support] is going to be harder and harder and harder…»

1. ISIE’s 2012 Report for the National Constituent Assembly Elections ennumerates the shortcomings and pitfalls of previous elections in order to “pull lessons from past experience” and thereby “organize free, honest, transparent elections” (p. 4). Pertinent to Ennahdha’s agreement with Burson-Marsteller, for which the source of funding and payment information are unspecified, the report includes a section on «Finance and Accounting Management» (p. 126) in which it notes previous lack of evidence and supporting documentation for expenditures abroad (p. 127), and another section on «Failures relating to auto-financing of the election campaign» (p. 129) explaining, «Article 7 of decree n°2011-1087 states that expenditures relating to the electoral campaign must be made via a special bank account designated for the electoral campaign.”(p. 130)

2. A disturbing Fox News report, Yale Outrage, aired after Ghannouchi’s visit to the University on 30 September.

3. On 25 September, an article on Al Huffington Post Maghreb, Electoral Campaign: Copied Video, Stolen Photo, American Promotion, Ennahdha Responds, describes how the party’s pre-electoral outreach has «provoked mini-polemics» namely in the form of a campaign video “inspired by” one from the recently elected Recep Tayyip Erdogan (AKP) party in Turkey, as wellas a party program cover featuring a mosaique of photographs meant to evoke the diversity of Tunisians, whereas at least two of the images have been sourced to advertisements and one to a French celebrity.

4. On 3 October, Mint Press News published an article with a section on “The Middle East and U.S. Lobbying” that discusses how “the United States’ unwavering committment to Israel … can only be understood in terms of the power of the Lobby [the American Israel Public Affairs Committee] in the U.S.” The article also describes Ennahdha’s deal with Burson-Marsteller and mentions the latter’s work for Scruggs & Healey, “the firm that Ahmad Chalabi hired to help propagate the message that eventually led to the U.S. invasion of Iraq.”

5. Quote from Robin Wright (cited in last paragraph of article)

7. «…I think, tragically, the ISIS war is going to be far longer than anything we’ve fought so far…» Robin Wright in the public discussion at the United States Institute of Peace

“…the sum of all Western fears; the decline of moderate political Islam; and the emergence of violent Jihadists, such as ISIS. This is likely to be reflected in future weeks, months and possibly years by the spread of violence in the Arab world and across the West.» Sawsan Ramahi, The Muslim Brotherhood and Salafist Jihad (ISIS): different ideologies, different methodologies