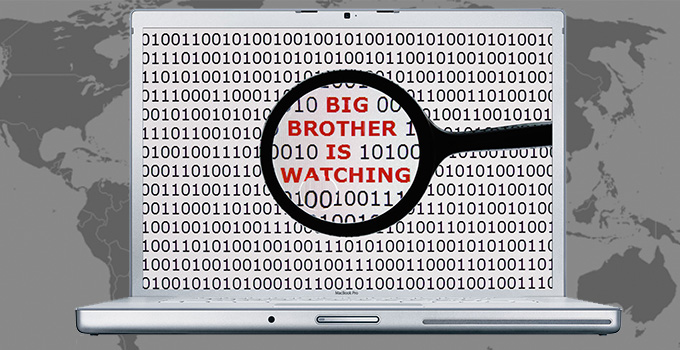 Currently, accessing and comparing surveillance laws around the world is an arduous and time-consuming process, which often leads to unclear, unreliable, or incomplete results. Yet, access to law is fundamental to an individual’s ability to participate fully in society. Privacy International

This past weekend, the first regional workshop of the Global Surveillance Monitoring and Advocacy project (GSMA) sealed the partnerships of organizations in Kenya, Uganda, Morocco, and Tunisia with the London-based charity organization Privacy International (PI). Nawaat’s Sami Ben Gharbia was amongst activists, leaders, and advocacy officers in the two-day conference on «Freedom of Expression and Human Rights in the Digital Age.»

We advocate for strong national, regional, and international laws that protect privacy. We conduct research to catalyse policy change. We raise awareness about technologies and laws that place privacy at risk, to ensure that the public is informed and engaged. Privacy International

Nawaat and PI collaboration commences in the midst of heightened security concerns and a charged political atmosphere preceding elections next month. The government’s adherence to and seeming reinvention of vestigial laws and antiterrorism tactics have respurred public debate around the overlap between national security and individual liberties, particularly the rights to legislative protection, privacy, and access to information described in articles 8, 12, and 19 respectively of the Universal Declaration of Human Rights. 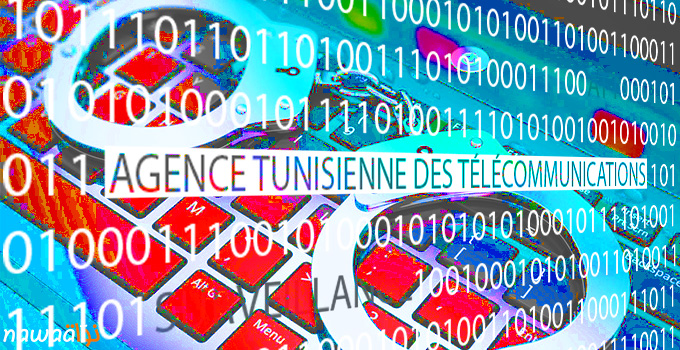 Could it be that the raison d’État is re-instilling, in the name of the fight against terrorism, a culture of suspicion, surveillance, and self-censorship that underlie our most pugnacious fears? Nadia Haddaoui, Terrorism and Cybersurveillance: Is the ATT Operating Illegally?

In a Nawaat article published last month on Terrorism and Cybersurveillance: Is the ATT Operating Illegally? Nadia Haddaoui provides an overview of the controversy that has surrounded the government’s approach to digital communications surveillance since the adoption of decree n°4506-2013 on 6 November 2013.

…as of now, the Agency eludes legislative authority since this law on cybercriminality, which has yet to be submitted to Parliament, must specify the obligations of the ATT that the decree does not specify. Certainly the Internet today represents and important vector of propaganda, recruitment, and incitation of terrorism, but the ATT raises a multitude of questions and concerns regarding the absence of regulation governing cybersurveillance.

…As for the draft law on cybercriminality, not only does it principally target terrorists as one would expect, but all internet users, and so in essence all citizens.

It is the apparent reemergence of unconstitutional and unlawful surveillance mechanisms and practices—invoked by Minister of the Interior as the State’s plan of action against terrorism, commonly deemed acceptable for conformity with international standards (namely the Budapest Convention on Cybercriminality), categorically unavailable to civil society for consideration until leaked into the domain of public information—that is the focus of Nawaat and PI’s work over the next three years of the GSMA project.

The conference on August 29 – 30 was organized by PI in conjunction with the Moroccan Association of Digital Rights (ADN)1 and hosted at Moroccan Association for Human Rights (AMDH) headquarters. Civil society actors from the Katiba Institute and the National Coalition for Human Rights Defenders in Nairobi, Unwanted Witness in Kampala, ADN and AMDH in Rabat, and Nawaat from Tunis converged for the first time to discuss surveillance practices and policies, civil society awareness and engagement, and to define the context, objectives, and approaches to promoting and protecting the right to privacy in the digital sphere.

Some organisations have been doing a great job at training people to use technology; with this project we want to train people on how to change laws. Gus Hosein, Executive Director, Privacy International

Technologist Richard Tynan dissected communications and surveillance infrastructure, describing land-line (fixed telephone) and wireless (cellphone and Internet) networks in terms of how they are set up and how/where communications can be intercepted by an «adversary» such as an ill-intentioned hacker or corrupt authority, emphasizing that no security tool is one-hundred percent effective and will ultimately be cracked.

Communications surveillance: The monitoring, interception, collection, preservation and rentention of information that has been communicated, relayed or generated over communications networks
Frank La Rue, Report of the Special Rapporteur on the promotion and protection of the right to freedom of opinion and expression, 17 April 2013

The onus is on the State to demonstrate that such interference is neither arbitrary nor unlawful. UN High Commissioner for Human Rights Navi Pillay quoted in Dangerous practice of digital mass surveillance must be subject to independent checks and balances

«At what point is data interception unlawful?» Advocacy Officer Matthew Rice discussed communications surveillance in the context of interception, or interference with the right to privacy which occurs as soon as data is obtained without the consent of the original owner of the data. We must, Rice insisted, have a process of legislation governing communications surveillance. The mere existence of such legislation does not make it lawful, and the government is not exempt from regulations in this realm; data protection agencies must ensure that the State is held accountable and that it remains observant of the law as service operators. Three key points should be considered in the deliberation of a precise and appropriate legal framework which specifies the roles and delineates the limitations of state institutions. The ambiguous and inconsistent separation of state powers is a constant source of criticism associated with Tunisia’s so-called technocratic interim government2 and so these points are vital to legal reform in Tunisia:

Adequacy: Does retention help in combatting crime?
Proportionality: is the mandatory retention of all users’ communications data in a country proportionate?
Necessity: Can the scope of mass retention of data be limited to its strict necessary uses?

Central to monitoring and advocacy initiatives within the scope of GMSA are transparency and public oversight of state powers—executive, legislative, judiciary—that spans the drafting (prior authorization), implementation (operation), and assessment (post review) of laws (this last phase representing a particularly salient requisite in light of Riadh Guerfali’s avid argument that Tunisian legislation must be reformed to adopt the practice of case law).

The precedent of surveillance set by the NSA has provoked a foreboding sense that–as the PI team captured it so well–personal data will soon be akin a country’s natural resources for cultivation and exploitation by corrupt institutions; it is to avoid such a phenomenon that increasing public awareness about existing legal frameworks and proposed reforms is imperative. In Tunisia’s case the NSA example is dually resonant owing to (a) the analogous nature, as described in Tunisian and foreign media alike, of the NSA and the ATT3, and (b) the direct influence that the US State Department has had via alleged surveillance test projects in Tunisia. 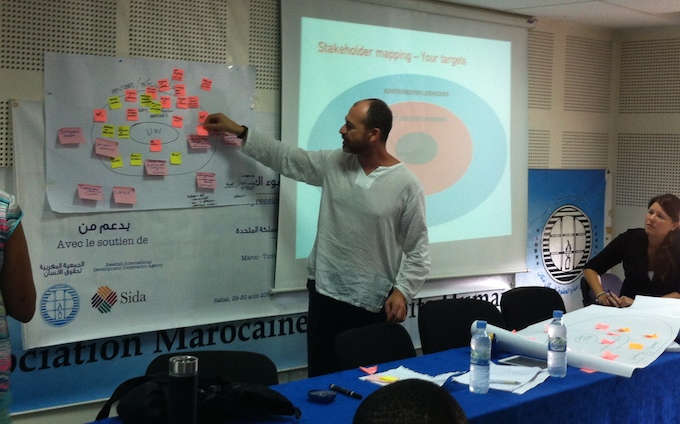 On the second day of the conference, participants met within their respective country groups in order to begin devising goals and GSMA plans of action. Anticipating Nawaat’s work over the next three years, Sami Ben Gharbia pointed to the present legal battle that encompasses the ATT mandated by decree and the leaked draft law concerning cybercrime, both of which must be addressed by «deconstructing the legal discourse of these threats and coming up with a proposal that will respect human rights.» Project objectives are two-fold: (a) to develop awareness campaigns about the right to privacy, surveillance mechanisms, and the legal frameworks that govern them and (b) to reform legal frameworks that will protect and ensure the right to privacy in the context of this «golden age of surveillance» as described by PI.

Detecting the Controllers: Building the capacity of change agents to detect and respond to surveillance interventions in 13 countries across south and south-east Asia, East Africa, North Africa and Latin America project (“the Project”) is to enhance the privacy and free expression of civil society and actors for change in these countries by providing civil society with knowledge, tools and resources to investigate and respond to surveillance technologies, and to build momentum for policy change to ensure strong human rights protections in national surveillance laws.The specific objectives of the Project are to:

1 Strengthen professional capacity to pursue investigation, campaigning, training and advocacy initiatives in order to raise privacy issues on national policy agendas, and to compile and present evidence of the need for stronger human rights protections in national surveillance laws.

3 Present national civil society organisations, media organisations, legal communities, and governmental bodies with evidence of the export of surveillance technologies by Western-based companies in partner countries, and the use of surveillance technologies against human rights defenders, activists, dissidents and journalists for the purposes of promoting national policy change.

3 Facilitate collaboration between PI and local partners in partner countries for investigation, advocacy and capacity strengthening amongst human rights defenders and organisations, activists, and journalists.

4 Present evidence of the export of surveillance technologies — and their use against civil society actors in partner countries — to regional and international human rights mechanisms in order to provide evidence of the need for these mechanisms to update their conceptualisations of privacy and free expression in the context of modern technologies and address the lack of international standards on communications surveillance and human rights.

6 Improve the understanding of epistemic communities (legal and technology communities), mainstream human rights organisations, parliamentarians and government officials in partner countries of surveillance arrangements in their respective countries and the need for human rights protections to be incorporated into national surveillance laws.

Before the end of the year, Nawaat, like each of the partnering organizations, is to organize a national workshop that addresses the right to privacy, access to information, and legal reform. The event will be open to and ideally include a gamut of key political and civil society actors such as media figures, lawyers, activists, geeks, the National Authority for the Protection of Personal Data, the Tunisian Internet Agency (ATI) and the Tunisian League for the Defense of Human Rights (LTDH), among others.

1. The Moroccan Association of Digital Rights (ADN) is a fledgling organization for which the GSMA workshop and press conference in Rabat marked a public launching. ADN website forthcoming.

3. See Nawaat article on In the Name of National Security, ATT Poses Threat to Freedom of Expression, Separation of State Powers and The Martyrs of the Revolution Affair – State Justice at Odds with Public Opinion