Addressing Terrorism at the Borders and Beyond, Overlooking Its Sources Within 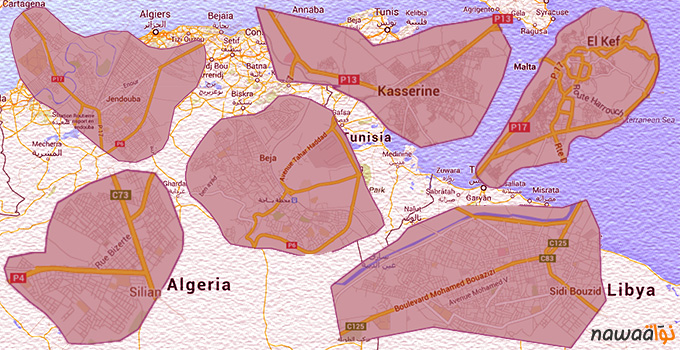 Discussions concerning terrorism in Tunisia variably evoke issues of national security, border control, regional relations, foreign alliances, and, to a much lesser extent, internal factors that induce violence targeting authorities, namely economic and social inequity. The multifaceted, complex nature of terrorism accordingly demands a careful and thorough evaluation of its causes and an accordingly comprehensive plan of action. Amidst concerns that hightened political instability and violence in Libya threatens the security of North African nations, Tunisian media and political figures are preoccupied with border issues and developing security strategies with neighboring countries, whereas few have directed attention and efforts towards the internal geographic, economic, social factors associated with the increased incidence over the past three years.

Ras Jedir – Immigration, Contraband, Terrorism
Around mid-July, the prospect of the closure of Ras Jedir prompted thousands of people of various nationalities to flock to the main crossing point at the south-eastern border of Tunisia and north-western border of Libya. The region’s principal crossing station marks a historically volatile point of tension and contention as it is associated with contraband traffiking. The intermittent opening and closing of the station undermines the economic security of local populations for whom cross-border trade represents the primary source of income. The confluence of people and goods is ridden with the issues of immigration, contraband, and terrorism that render the opening and closing of Ras Jedir consequential and controversial.

…in addition to the endogenous threat of terrorism, the Tunia-Libya borders can be an exogenous source of human and arms reinforcements, which is why these borders must be treated as the walls of a fortress. Tunisia has always been a welcoming country, but not at the expense of national security. Libyans who enter the country even with their families must know that there are laws, and that they must be observed. And that the times have changed. Hella Lahbib, With Determination, Victory is Never Far Off

La Rédaction, Nawaat, Word on the Street: Tunisians and the Closure of the Tunisia-Libya Border

Algiers, Cairo, Tunis Collaborate to Promote Political Stability and Security for Libya
The thousands of Egyptians who have who have flocked to Ras Jedir hoping to cross into Tunisia en route to Cairo have compelled the two countries to coordinate a border-crossing and transport strategy for the safe evacuation of Egyptian nationals, especially after two Egyptians died on Friday when thousands (fifteen thousand, according to Libyan sources) rushed the crossing point. Ministry of the Interior Lofti Ben Jeddou has since reported that the situation is under control, and Tunisian Minister of Transport Chiheb Ben Ahmed announced Monday the provision of fifty airbuses for those blocked at the crossing point, while Prime Minister Mehdi Jomaa reiterated Tunisia’s committment to facilitate repatriation of at least one thousand Egyptians via Djerba/Zarzi airport during a meeting with Egyptian Foreign Minister Sameh Chokri at the Kasbah on Tuesday.

In accordance with «a secret cooperation agreement concerning the securisation of the Tunisia-Algeria border,» the Algerian army has entered onto Tunisian soil reported L’Economiste Maghrébin on Tuesday. Signed May 27, 2014, the agreement aims to «assure the success of the cooperation between the respective specialized units» to which end the countries have conjunctively deployed 60,000 soldiers and set up 80 control points and 20 closed military zones along 965 kilometers of the border.

Tunisia’s collaboration with Egypt and Algeria has taken the form of a political-military axis that operates in the interest of regional security, of which Libya is the perceived common denominator threatening the spread of instability and violence. A meeting to discuss foreign intervention in Libya that was to take place in Tunis on June 2 was purportedly postponed due to a disagreement between Prime Minister Mehdi Jomaa and President Marzouki on who was to represent Libya in discussions. During the 23rd Summit of the African Union in Malabo, Equatorial New Guinea, Tunisia was reassigned the role of hosting the event that, according to Kapitalis, solidified Tunis’ entry into the Algers-Cairo political-military axis. Convening on July 13 and 14 in Hammamet, the Algerian, Nigerian, Chadian, Libyan representatives from the respective Ministries of Foreign Affairs, as well as the African Union’s Commissioner of Peace and Security, the Libyan Envoy of the Arab League, and the Libyan Envoy of the African League were a part of the agreement «to respect Libya’s unity, sovereignty, and territorial solidarity; to stop all military actions and encourage political actors to reconcile their differences through dialogue and consensus.» To this end, two ‘work groups’ were formed, one, headed by Algeria, dedicated to regional security, and another led by Egypt to sustain communication with Libya’s political class and civil society. Reports from both groups are to be submitted and discussed in the next ministerial meeting to take place later this month.

North Africa’s Beacon of Hope…
If Marzouki is underwhelmed by reinforcing regional ties to strengthen security measures, he is apparently more drawn to relying upon international allies for support against terrorism. On a recent visit to Washington, President Marzouki and Mongi Hamdi were received by US Secretary of State John Kerry to discuss North Africa’s security situation. The message was clear: the momentum of Tunisia’s democratic transition that renders the country a ‘beacon of hope’ can only be sustained with the help of «friends» and «partners.»

AtlanticCouncil, “Tunisia’s Democratic Successes: A Conversation with the President of Tunisia Mohamed Moncef Marzouki”. Moncef Marzouki Asks US to Give Twelve Helicopters to Tunisia. 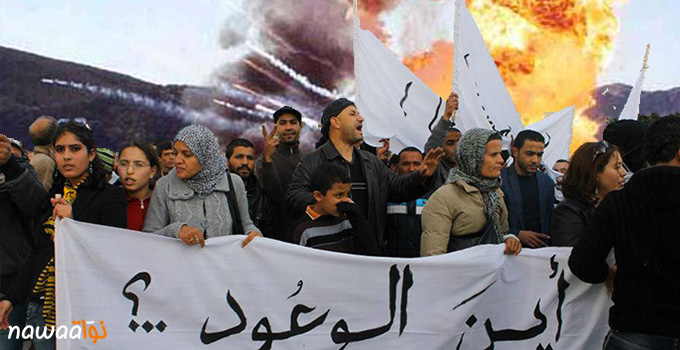 The growing threat of terrorism in Tunisia must be addressed not only in terms of security issues, but in relation to its causes and economic roots which represent the main source of hatred expressed by terrorists. Intellectual void and external influence cannot alone incite such hatred except in conjunction with the deterioration of the economic sphere, the spread of poverty, and regional inequality. Samih Okkez, Grey Zones: Regional Marginalization and Violence in Tunisia

While the Head of State and Minister of Foreign Affairs promote Tunisia’s internationally-touted beacon-of-hope status to incite foreign support in the struggle against terrorism, Nawaat contributor Samih Okkez’s article Grey Zones: Regional Marginalization and Violence in Tunisia represents an introspective examination of terrorism. Okkez examines the the correlation between six of the country’s westernmost impoverished regions: (from North to South) Beja, Jendouba, Kef, Siliana, Kassrine, and Sidi Bouzid. Okkez uses two tables–one listing terrorist operations since 2011 by date, target site, and victims (dead and wounded), another comparing national and regional rates of poverty, unemployment, and illiteracy–to illustrate that diminishing economic security coincides with an increase in violence against security and military forces.

We cannot turn a blind eye to the correlation between the map charting terrorism and the map showing poverty and unemployment in Tunisia; the regions with the highest rates of illiteracy, poverty, and unemployment were the same with the most severe terrorist operations in terms of number and nature.

That 80 percent of terrorist operations in Tunisia since 2011 have been concentrated near the Algerian border in the six “grey zones” marked by high poverty, unemployment, and illiteracy rates suggests that economic and social marginalization are contributing factors to the proliferation of violence against authorities. Okkez attributes this phenomenon to a “silent terrorism” that is the failure of state institutions to provide basic services and infrastructure and the ensuing sense of isolation, frustration and resentment amongst underserved populations directed towards the government and society. While external pressures and tensions demand the Tunisian government’s attention and cooperation in developing regional security strategies, the country’s efforts to mitigate terrorism will remain inadequate so long as internal economic and social disparities are overlooked, and worse, perpetuated.