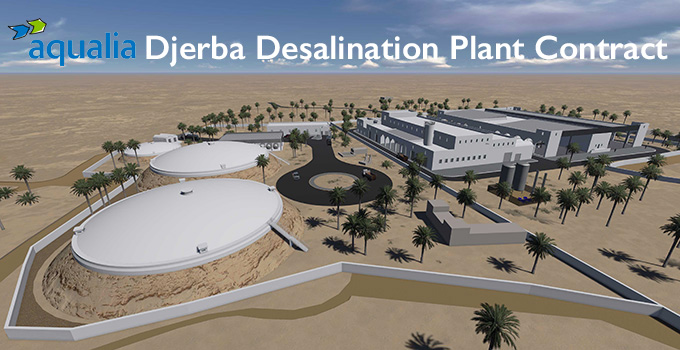 In 2010, the German Bank for Reconstruction (KfW) reported on Tunisia – Targeting Water Scarcity:

In Tunisia, water resources are under stress both in terms of quantity and quality. With less than 500m³ available per person per year, the country is among those deemed water-scarce. By 2011, 95% of the total renewable water resources will be in use, so developing new water resources to cover additional demand is not feasible. Instead, it will be necessary to implement the principles of integrated water resource management (IWRM).

If interim president Moncef Marzouki’s ominous speculations several months ago about the future of water in Tunisia were taken as a laughably apocalyptic presentation of Tunisia’s precarious water situation, the validity of the intended message has long been appreciated by the government, international institutions, and, of course, the Tunisian citizenry. On the island of Djerba at least (where, a Nawaat article described earlier this month, «close to hotels, under the beautiful palms, on the beaches and surrounding the white-washed houses, putrid piles of garbage pollute the air, the water, the land, and the lives of residents»), the local population may soon benefit from the construction of a new desalination plant that promises abundant, pure, sea-sourced desalinated drinking water.

A host of economy-, foreign investment-, engineering-, environment-, and technology-based outlets in Spanish media reported last month on an agreement that promises the construction of a sea water desalinization plant that will supply the island’s 150,000 inhabitants with approximately 50,000 meters3 of water per day.

Not so much as a whisper of the recent news in Tunisian media nor on the SONEDE (National Water Distribution Utility) website, although the idea for such a project has been on the table for quite a number of years as indicated by a modest number of publications dating from 2008. The first, a Webmanagercenter article, reported that,

The country needs external financing and foreign capital, the only way to prioritize the implementation of new techniques, to permit the impartation of knowledge, and to better manage the risks of high-technology envisioned in this seawater desalination operation in Djerba, Habib Jomaa of SONEDE told Webmanager, which added that such a project was anticipated to

fill the gap between the island’s supply and demand, to attenuate the country’s debt by diversifying sources of funding and to enable SONEDE personnel, through this pilot project, to become acquanted with new technologies that are environmentally-friendly in various phases of production (pre-treatment, treatment, and post-treatment) of moderate energy expenditure. Imeddedine Boulaâba, Seawater Desalinization Project in Djerba

This important project is one of a number of measures being implemented by the Tunisian government for the promotion and development of non-conventional water resources such as desalination, in order to resolve water-related issues that the country faces in terms of shortages and poor quality and also in order to meet the growing demand in primary tourist destinations such as the island of Djerba. Mokhtar Yahyaoui, The Bitter Water of Sakher El Matri, July 2010, Nawaat.

In July 2010, Nawaat contributor Mokhtar Yahyaoui reported that the Ministry of Agriculture, Hydraulic Resources, and Fishing and SONEDE had designated a contract to the Tunisian Groupe Princesse El Materi Holding and the Spanish Befesa Medio Ambiente Company. The author’s source, a press release issued by Befesa Medio Ambiente, described the project as a DBOOT (Design-Build-Own-Operate-Transfer) concession of a twenty year-period and with a cost exceeding 220 million euros with an anticipated annual revenue of 11 million euros.

«Kapitalis reported that, to this day, not a single official statement from either the Tunisian government or parties concerned has been issued regarding the granting of this concession.» The Befesa contract and desalination project in Djerba, reflective of a true need for initiatives to respond to inadequate water quality and quantity, were and are widely symbolic of the infamous «relationship between money and power» under Ben Ali. The lack of information at the time regarding the contracting, construction and operation of the desalination plant was presumably of a surreptitious nature in light of the impressive «list of thriving businesses» and concurrent «meteoric ascent» of Tunisia’s Golden Boy, Mohamed Fahd Sakher El Materi (alternative spelling Metri), a caricature of Ben Ali-Trebelsi clan nepotism and inspiration for another Nawaat article ennumerating the young man’s various successful entrepreneurial and political endeavors. Evoking the suspect qualifications of the Djerba concession, the author judged the incompetency of Tunisian actors involved—the Groupe Princesse El Materi Holding (owned by Sakher El Materi), SONEDE, and the Ministry of Agriculture, Hydraulic Resources, and Fishing, and predicting the increase in water prices as a means optimize the profits made on the desalination plant.

It is not unlikely that water prices will be raised in order to render more profitable the plant’s operation. In fact, Befesa Agua estimated concession revenues in 20 years to be 417 million dinars (220 million euros), or 20.9 million dinars (11 million euros) per year. To reach this level of revenue and assuming the State does not subsidize it, the water produced over two decades must cost 1.14 dinars (0.6 euro)/meter3, an average that is significantly higher than present rates (between 0.145dinar/m3 et 0.89dinar/m3)! Yassin Temlali, The Meteoric Ascent of Sakher El Materi, November 2010, Nawaat. 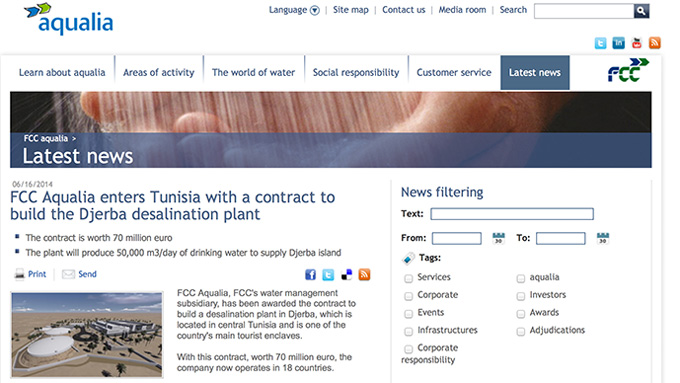 The newest development in the vein of Tunisia’s seawater desalination works is SONEDE’s contract award to GS Inima and FCC Aqualia, whose press releases are remarkably consistent with information presented over the nearly eight years of successive deals and discussions. On June 16, Aqualia announced that the contract represents a «50-50 joint venture» in which «the consortium will design, build, commission and operate the seawater desalination plant during the warranty period.» Both outlets report that, «The project also includes the seawater intake and brine discharge systems, a plant to remove iron from well water, a drinking water pumping station, and the supply and installation of 23.7 kilometres of mains to connect with the existing water grid. The plant will be expandable to 75,000 m3/day, and the marine and civil engineering works to cater for the future increase in capacity will be put in place at this stage.» 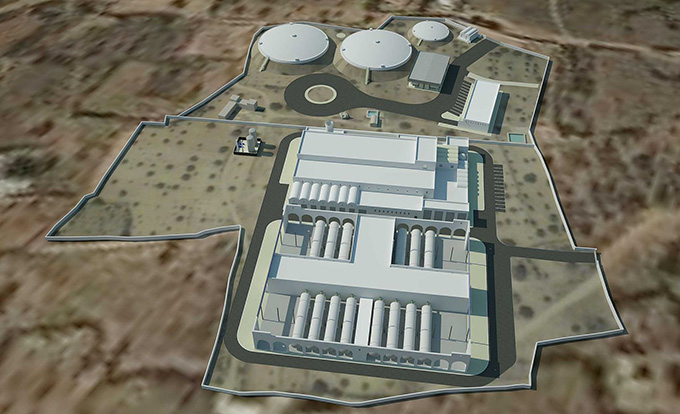 For both Madrid-based GS Inima Environment and FCC Aqualia, the Djerba water project is a strategic advancement in North Africa where both companies have working operations in Algeria.

With this contract award, GS Inima Environment consolidates its presence in North Africa where it has already built two seawater desalination plants in Algeria and begins a new relation with a client of great importance specifically in the desalination sector, in a country that is clearly committed to this technology in order to alleviate its water shortages. Press Release, GS Inima Environment

FCC Aqualia, the water management subsidiary of the Spanish FCC (Fomento de Construccion y Contratas), is the third largest water company in Europe and the sixth-largest in the world, serving 23.5 million consumers in 1,100 cities across 18 countries, according to its press release.

This contract enables FCC Aqualia, through its subsidiary aqualia infraestructuras, to strengthen its footprint in North Africa, where it has built water treatment plants in Algeria and Egypt. This is the company’s first contract in Tunisia, a country which is planning to build water treatment plants in other major cities. Press Release, FCC Aqualia

Not a Concession, but a Purchase of Sorts
An important distinction was clarified when Nawaat contacted Luis González Serrano, International Director at GS Inima Environment, a subsidiary of the Seoul-based giant GS Engineering and Construction Corporation. When the planning for a desalination plant began nearly eight years ago, original negotations were based on the principle of BOT (Build-Operate-Transfer, alternatively DBOOT, mentioned above), «a form of project financing, wherein a private entity receives a concession from the private or public sector to finance, design, construct, and operate a facility stated in the concession contract.» That initial plans prescribed concession— «a grant of rights, land or property by a government, local authority, corporation, individual or other legal entity» was consistent with the pattern, discernable particularly in foreign companies’ entry into and investment in Tunisia’s hydrocarbons sector, of outsourced natural resource exploration, extraction, and/or processing-production rights. By contrast, SONEDE’s contract with Inima and Aqualia, as González made clear, is not the equivalent of selling or ceding Tunisia’s land and resource rights, but of the purchasing of a machine built on site, a factory that SONEDE will buy and own.

The 69.4 million-euro contract will be co-financed, in the form grants to SONEDE, by the French Agency for Development (AFD) (which has provided associated hydraulic project funding since May 20121) and the German Bank for Reconstruction (KfW) (which has provided associated funding since August 20132), who have co-funded other water programs in Tunisia.

Whereas the Inima and Aqualia ‘joint venture’ is of a discernably different nature than the Groupe Princesse El Materi and Befesa Medio Ambiente consortium, it is nonetheless born of a heritage characterized by non-transparence, the exploitation of an essential and compromised natural resource as a profit-making commodity, and generally poor governance. Certainly the critiques and questions that surrounded water treatment in Djerba four years ago are not the same in the context of the most recent deal (in view of several key differences such as the country’s «Start-up Democracy Team» of technocrats that has replaced the Ben Ali regime, the identification and appropriation of Ben Ali-Trebelsi clan holdings, and the granting of a construction contract as opposed to a concession agreement). Nonetheless, the consistent lack of up-to-date, detailed, publically-available information through the national institutions responsible for (water, no less) resource management is disappointingly indicative of continued non-transparence. As for the authenticity and efficacy of national water management, Djerbans will likely be the first to gauge the capacity of SONEDE and the Ministry of Agriculture to address water issues when, upon completion of the island’s desalination plant, the former experience changes (or lack thereof) in the quality, quantity, and cost of water.

1 “Finance Plan: The concessional credit granted by AFD, for a total of 40 million euros, finances HT of the eligible projects described below. Funding for SONEDE also covers taxes and a portion of unanticipated expenses. The total amount of the program is 52.95 million euros. The SONEDE-AFD finance agreement was signed May 21, 2012. Execution: Project management will be carried out and supervised by SONEDE (National Water Distribution Agency).” Securisation Program for SONEDE Production and Supply Capacities of Potable Water: 2012-2016

2 “SONEDE (National Water Distribution Utility) has just signed a loan agreement for 60 million euros (120 dinars) with the German Bank for Reconstruction (KfW). This loan will enable the construction of a seawater desalination plant on the island of Djerba (governorate of Medenine) with a capacity of at least 50,000 m3/day and a potential capacity of 75,000 m3/day. This new plant will enable the reinforcement of hydraulic resources for potable water on the island of Djerba which faces difficulties with the water supply throughout the summer.” Y.B., Seawater Desalination Plant in Djerba: A German Loan of 120 million dinars to SONEDE.