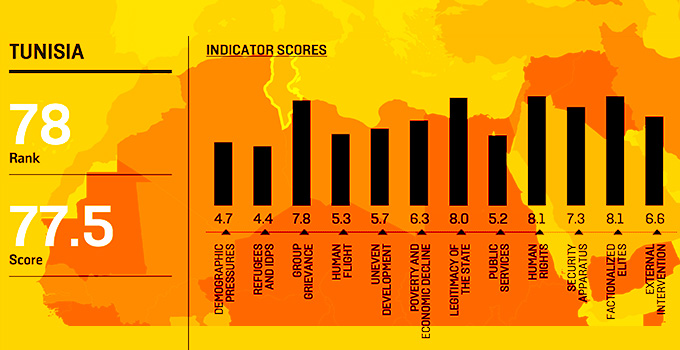 Several comparative studies of which Tunisia is a featured country have recently caught our attention at Nawaat, and here we reflect on them in the context of a sort of comparative examination of our own. By our estimations, the Good Country Index passes as the most engaging tool for its pragmatic persective and reassuring assertion that the index is one alternative perspective that is to be considered in conjunction with other indices and analyses; the Fragile States Index makes accessible some useful information without presenting any strikingly revelatory insight, while two articles from The Economist that examine the so-called Arab World are flagrantly devoid of research- and critical thinking-based material for relevant, constructive discussion.

What I mean by a Good Country is…a country that contributes to the greater good … The Good Country Index doesn’t measure what countries do at home: not because I think these things don’t matter, of course, but because there are plenty of surveys that already do that. What the Index does aim to do is to start a global discussion about how countries can balance their duty to their own citizens with their responsibility to the wider world… Simon Anholt, creator of The Good Country Index 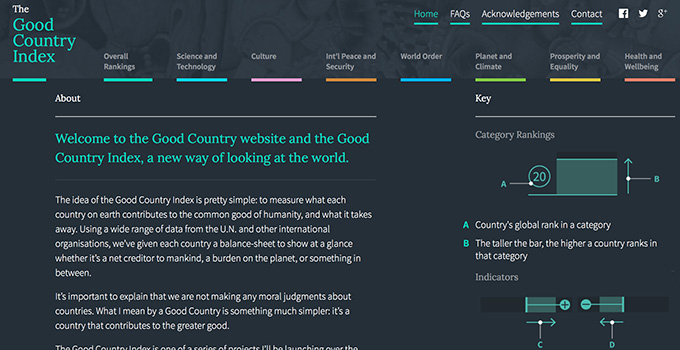 How Good is Tunisia?

Out of the 125 countries for which data is presented, Tunisia is number 56 between the Former Yugoslov Republic of Macedonia and Argentina respectively. Seven categories (represented graphically as columns) including five factors (represented graphically as rows) constitute a total of 35 indicators assessed to determine the country’s overall ranking. In each of seven categories, every country earns a score that reflects its relative (positive value) contribution to or (negative value) detraction from the «common good», or international sum, of a given indicator. Tunisia ranks as follows:

It is important to note that the index draws from 35 datasets (produced by international agencies such as the United Nations, World Bank, etc.) mostly from 2010 in order to reconcile a (fairly unconventional) variety of factors accounted for over the past decade. Noteworthy are Tunisia’s higher-than average contributions to the common good in terms of International Publications (Science and Technology) that indicates «the number of articles published in international journals (2009 latest data according to World Bank) relative to the size of the economy»; Peacekeeping Troops (International Peace and Security) or the «number of peacekeeping troops sent overseas for UN missions, relative to the size of the economy»; Hazardous Waste Exports (Planet and Climate); Open Trading and FDI Outflows (Prosperity and Equality); Voluntary Excess Donations (Health and Wellbeing) to the World Health Organization. By contrast, the country purportedly detracts from the common good in terms of Press Freedom (Culture) measured by Reporters Without Borders and Freedom House; Refugees hosted (World Order); CO2 Emissions (Planet and Climate).

The Good Country Index is perhaps more like the interactive GapMinder concept than the average United Nations or World Health Organization country profiles in which the standard indicators of infant mortality rate, life expectancy, literacy, GDP, etc. are bare-bones data that inform indices and comparative studies. What the Index offers is an alternative slant on country profiling, the sum of a country’s internal (national) workings in terms of its global (international) footprint. The idea that, «from a sociological perspective, the well-being of the individual is inextricably tied to that of his society» is true of our immediate society and surroundings and can arguably be extended to a global society, which, in spite of being a relatively abstract concept, certainly weighs, however variably, in the human conscience. 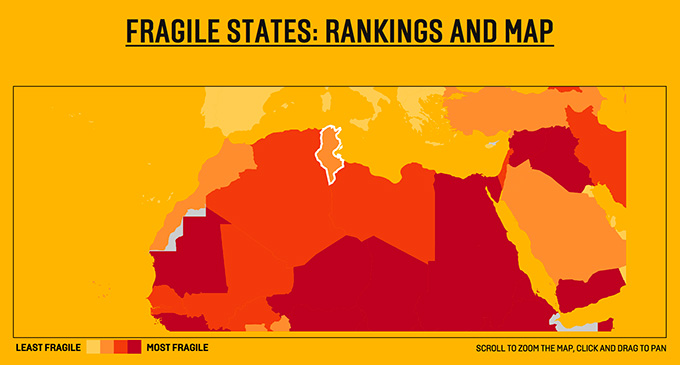 How Fragile is Tunisia?
On the Fragile States Index world map that grades countries’ fragility according to a color scale of yellow (least fragile) to orange to vermillion to deep red (most fragile), Tunisia is colored orange. According to the Fragile States numeric index, Tunisia is the 78th most fragile state, between 76 Azerbaijan (77 appears to be missing) and 79 Ecuador, out of the 178 countries assessed. Among the indicators examined, the country’s scores appear relatively high for Group Grievance (Tensions and violence among groups within the state), Legitimacy of the State (Corruption and other measures of democratic capacity, such as government performance and electoral process), Human Rights and Rule of Law (The protection and promotion of human rights), and Factionalized Elites (Conflict and competition among local and national leaders).

The Fragile States Index…has put countries into perspective by providing an annual snapshot of their vitality and stability (or lack thereof) and ranking them accordingly … What these metrics often show is that rarely, if ever, do states change fundamentally from year to year … Look a little closer, however, and there are significant, even surprising, developments and trends — in single countries, across regions, and even within the index’s 12 political, economic, and social indicators … Although the overall picture here might seem familiar, the numbers themselves reveal narratives that were unforeseen, and perhaps overlooked, in 2013. Part 1: Rankings and Map, Fragile States Index

In spite of — or perhaps owing to — well-established support (Foreign Policy has published Fund for Peace’s Index for the past ten years) and a polished online presentation, a fairly predictable perspective and lack of depth render it generally less interesting than other indices, comparative studies, and interactive tools (such as GapMinder mentioned above) that have been developed over the past decade. If it is not innovative, it is at least a practical tool to keep in the tool box. By contrast, the featured gallery «Postcards from Hell: Photos of life and death in the world’s 50 worst places» — (ironically displayed several inches above an interview in which Fund for Peace Executive Director Krista Hendry explains the decision to change the doomful “Failed State” to the less absolute “Fragile State” designation) is a retrograde, disparagingly-titled visual presentation of the featured countries (Tunisia was not among the countries depicted). If the intention was to «garner attention,» as Hendry indicates, the attempt is at the expense of the integrity of the context in which the Index is framed; if the intent is to humanize and promote awareness about real, tangible, daily living conditions in so-called fragile states, such markedly positive/negative language and war-, violence-, poverty-concentrated imagery is counter-productive as it perpetuates selective and redundant portrayals of the Western world’s most common stereotypes and generalizations about countries, regions, continents.

The Makings of Democracy
The Arab World: Tethered By History / The Economist: Tethered by Myopia 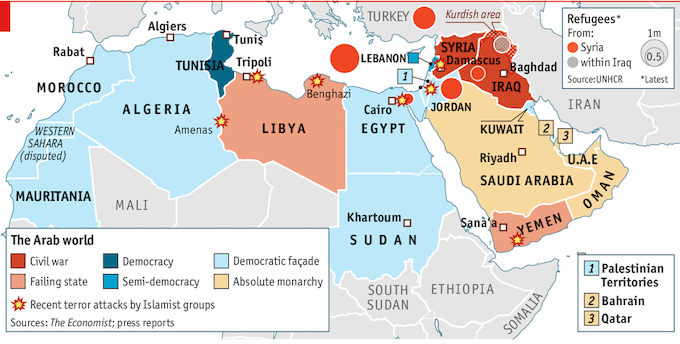 Why Arab countries have so miserably failed to create democracy, happiness or (aside from the windfall of oil) wealth for their 350m people is one of the great questions of our time. What makes Arab society susceptible to vile regimes and fanatics bent on destroying them (and their perceived allies in the West)? … Only Tunisia, which opened the Arabs’ bid for freedom three years ago, has the makings of a real democracy. The Tragedy of the Arabs, The Economist

Two remarkably similar articles, «Tethered by History» and «The Tragedy of the Arabs,» published in the July 5 issue of The Economist designates Tunisia as the Arab World’s only true “Democracy.” The ambiguous alternative classifications presented are «Semi-democracy» that is associated with Lebanon, «Democratic façade» for Mauritania, Morocco, Algeria, Sudan, Egypt, Israel, Jordan, and the Palestinian territories, «Civil War» for Syria and Iraq; the «Failing State» title that was formerly the name of the Fragile State Index is also the dead-end categorization that The Economist attributes to Libya and Yemen; the «Absolute monarchy» title is reserved for Saudi Arabia, Oman, the United Arab Emirates, Qatar, and Bahrain.

Whereas investigative and analytical writing are often well served by the author’s intentional emotional detachment, at certain moments and in response to certain stimuli, one is moved beyond emotional constraint and the aspiration for objectivity. In the case of The Economist’s two recent articles on the MENA region, it is unbearable to tread gingerly about flagrant generalizations and unqualified statements that amount to offensively ignorant and presumptive pieces of writing in a well-established media outlet with a broad international readership.

Similar to the Fragile States Index «Postcards from Hell» images, a predictable and even less relevant image (above) illustrates equally predictable and irrelevant statements from both Economist articles. Is it overly-generous to extend to the authors of these pieces the benefit of the doubt and assume that they intended for these reports to be contemplated in conjunction with a host of supplemental resources, well-founded perspectives, in-depth analyses? To avoid stating the obvious and/or reproducing here the entirety of both articles, below are a few particularly perplexing excerpts and two reader comments that capture well enough what might be common responses.

All too many of the Arab world’s 350m people are stuck in similar binds, caught between rotten governments and even more rotten and often violent oppositions…Trapped either in stagnant repression or cycles of strife, they are unable to make progress. This stasis has heightened long-standing concerns that Arab countries are in some fundamental way unsuited to the modern world…But it is a particular pattern of 20th-century modernisation, rather than its absence, that lies behind the region’s political failure.

Why is the Arab world a weary and wearying mess? It is not a new question—Arab intellectuals of the 19th century pondered the puzzle of their ancient civilisation’s weakness in the face of an imperialist West—but the past decades have made it more salient than ever, both within the region and outside.

Closed politics may be tempered by an openness to ideas and an open economy, as in China. Open politics can make up for poverty and a paucity of human resources, too. But to have closed politics and closed minds together is a recipe for disaster; for proof, consider the current fate of the Arab states.
Tethered by History, The Economist

Voices calling for the kind of sweeping, liberal reforms that might have pulled Arab countries into line with the rest of the world almost always proved too weak. Only Tunisia truly cast off its old ways and embraced a new, more open order.

Outsiders, who have often been drawn to the region as invaders and occupiers, cannot simply stamp out the jihadist cause or impose prosperity and democracy … But only the Arabs can reverse their civilisational decline, and right now there is little hope of that happening.The Tragedy of the Arabs, The Economist

Once again, The Economist offers a sweeping analysis of an entire region. I will never comprehend how Western media gives itself the right to offer such sweeping commentary on the conditions of a region as culturally, politically, and socio-economically diverse as the Arab world.
Reader commentary in response to Tethered by History

THE ECONOMIST’S CLASSIFICATION IS — TO PUT IT POLITELY — RUBBISH. The Economist’s classification is worthless, it is nonsense. It is an insult to Tunisians’ intelligence and an insult to scientific analysis against which this classification does not hold up. The appropriate scientific approach would have defined «democracy,» «semi-democracy,» and «democratic façade»!
Reader response to Tunisia: The Arab World’s Only Democracy, According to The Economist, Business News

Certainly generalizing trends and observing regional patterns is at times inevitable, at times necessary, at times pertinent, at times revelatory…but always so with an awareness of the conditionality and limitations of the information discerned, and bearing in mind the objectives of reflection, investigation, and discussion as opposed to the drawing up of finite conclusions or grand statements. Whereas, for instance, the Good Country Index openly takes into account its shortcomings and acknowledges its restrictions and advocates for its application in conjunction with additional resources and to the end of constructive discussion that might produce effective change, The Economist articles’ generally undiscerning estimations and qualifications of the Arab World ostensibly offer nothing novel, tangible, or substantial for scientific, social, political, or cultural contemplation, but do, however, leave the reader with a particular distaste for undefined, arbitrary nomenclature and publications «tethered by myopia.»