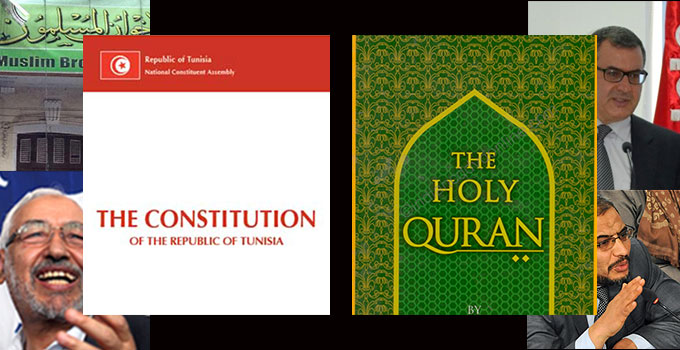 Ennahda: ‘Renaissance’ Movement, Islamist Party
For anyone who has not followed the history and evolution of the Ennahda party through the chapters of its existence (exile under Ben Ali to post-revolution popular support to concession in political transition), it is a lofty undertaking to grasp an understanding of the nature of Tunisia’s ‘Renaissance’ Party and Islamist movement. Ennahda embodies the ambiguous and variable dynamic between religion and politics that is among the most globally popular subjects of polemical discussion (oftentimes to the point of banality), and also among the most difficult to approach, a seemingly interminable and inconclusive gray area that promises debate to perpetuity.

Stakes are high for the party. It remains to be seen if its members will be able to construct a long-term political vision, which was not the case of the [Egyptian Muslim] Brotherhood, overly confident in electoral gains. In Tunisia, there exists an imperative for national reconciliation. Ennahda will be tested on its capability to meet this imperative. Larbi Sadiki quoted in Ennahda and the Muslim Brotherhood, The Myth of Filiation, 2013

For the Center for the Study of Islam and Democracy (CSID), Ennahda has indeed met that imperative for national reconciliation. On June 20, the organization presented this year’s Muslim Democrat Prize to the Ennahda Party bloc of the National Constituent Assembly. If it is not unordinary, given CSID’s base in Washington, for the original announcement to be issued in an American news outlet, it is nonetheless curious that the would-be press release does not have its equivalent in Tunisian media, or at least on the English-Arabic CSID website. Upon our request for an explanation, CSID President Radwan Masmoudi told Nawaat that «there are actually and legally TWO CSID’s. One based in Washington DC acting under US laws, and the other based in Tunisia acting under Tunisian laws. The two organizations cooperate and work together on several projects, but they are legally separate institutions.» He added, «The award was given by CSID (Washington DC) and not by CSID-Tunisia, and that is why the press release was made in Washington, as we have done in the past 15 years.»

PR Newswire, with its headquarters in New York and funding from the London-based UBM plc., was therefore the first outlet to report that «The Center for the Study of Islam and Democracy (CSID) has bestowed its 2014 Muslim Democrat of the Year Award to the Nahdha Bloc in the Tunisian National Constituent Assembly (NCA).» Masmoudi presented the award to Sahbi Atig of Ennahda’s Parliament block «for helping write a progressive, democratic, and consensual constitution,» while Director of MENA programs at CSID and Senior Fellow at POMED William Lawrence followed with a similar statement, «We believe that the Nahdha Bloc has succeeded with its partners in achieving a consensus that paved the way to ratifying a remarkable and enlightened constitution for all Tunisians.»

Tunisian Democracy’s ‘Fear of Consensus’
Taking an inventory of reports from the end of last month that convey the clamor and chaos of Tunisia’s party politics gearing up for elections in October, one can appreciate a subtle irony in the attribution of—and the granting of an award for—consensus to the Ennahda (or any other) party. A chameleon to the country’s socio-political landscape—now a movement now a political party1—Ennahda conceded to joint holdership with Ettakatol and Congress for the Republic (CPR) in November 2011, a gesture that symbolized the beginning of the Troika government and that has been internationally praised as a noble yielding of power for the democratic good of the country. On a national level it is commonly understood that Ennahda had no choice but to operate within a shared government as it occupied at the time of the country’s October 2011 elections only 40 percent of parliamentary seats2. Now the party faces the second and final elections of the transition period; the past few months of early electoral campaigns in which parties have been reshuffling and restrategizing have Tunisian journalists framing «consensus» as an illusion beneath which the interworkings and dealings of UPT, Nidaa Tunis, Ennahda, and smaller parties are anything but consensual.

This might ultimately be the unintended benefit of the ‘consensus’ if it came down to a pact of non-aggression amongst the Right: to reestablish some semblance of logic in Tunisia’s political spectrum. In the meantime, the consensus will remain a euphemism of the paralyzing sharing of power, or how to ‘win the elections without taking power.’ Seif Soudani, Political Review: Democracy’s Fear of Power

…whereas leaving the government by no means indicates a ‘ceding of power,’ which was moreover confirmed by Ghannouchi and which corroborates multiple examples every day in Arab countries where he who governs is not the one who holds the power. Slaheddine Dchicha, Help! Ennahda is Back!

The one Tunisian media outlet to have reported on (alluded to) Ennahda’s Muslim Democrat award thus far is Kapitalis, which has framed the achievement in the context of the Movement’s patient and formulated return—and the accompanying subliminal return of Islam—to the political scene. The author describes the fall of Ben Ali as an opportunity for Ennahda members, «brothers,» to infiltrate politics under the guise of a tri-party government; he explains how the «derisory» presentation of CSID’s award to Ennahda via Masmoudi—a «nahdhaoui» himself as the article deliberates—which coincided with the party’s 33rd anniversary celebration that took place at the end of June, is a part of the escalation of Ennadha’s presence heading into the election period:

Ali Larayedh and Rached Ghannouchi are omnipresent in the media. Did the latter not declare to Asharq Al-Awsat on Friday, May 30, «We remain the biggest group at the Assembly, which is the origin of power in the country, and nothing gets passed without Ennahda’s approval.» It is thus not surprising that this party has gained everything it coveted: a semi-parlementary regime and the holding of legislative before presidential elections. Slaheddine Dchicha, Help! Ennahda is Back!

‘Muslim Democrat Prize to Tunisian Muslim Brotherhood‘
The Kapitalis article resonates, in context and presentation of facts though not in tone and treatment of the information discussed, with an American outlet that published «Muslim Democrat Prize to Tunisian Muslim Brotherhood.» The title alone is almost jarring, not necessarily for its content (as Ennahda’s ties to the Muslim Brotherhood are often evoked) as in its unqualified, matter-of-fact labeling of the Party as a Muslim Brotherhood and the inherent “tunisification”3 of the term. The source is US-based Global Muslim Brotherhood Daily Watch (GMBDW), «An Intelligence Digest Covering Developments in the Worldwide Muslim Brotherhood Network» that purportedly «represents neither a political nor a religious point of view and seeks only to present the best available and reliable information on the daily activities of the Global Muslim Brotherhood.» In spite of allegedly objective reporting and several pieces of evidence (for example, based on its daily intake of international news and publications, GMBDW lists among the hundred-or so individuals and organizations worldwide with «varying degrees of ties, links, and associations» with the Global Muslim Brotherhood the «Ennahda Party of Tunisia» and leader Rachid Ghannouchi), the title itself bodes the over-simplified, uninvestigated, automatic, redundant assumptions that have been frighteningly common in American media since September 11. That there are ties between Ennahda and the Muslim Brotherhood is well-established, but the nature, significance, and historical context of those ties are layered and elusive at best and must be accounted for in any serious discussion on the topic.

We cannot discuss the genesis of the Muslim Brotherhood without taking into account the context of its birth … [Hassan Al Banna] wanted a complete military, political, and cultural dissociation from the British presence. In this regard I recall that before Tunisia’s independence, Bourguiba was an advocate of the [wearing of the] veil for Tunisian women … If I digress, it is only to explain that the return to the roots of the Muslim Brotherhood is no new [trend]. It is a reaction that we find among those who want to assert their authenticity in the face of foreign aggression … How many among us feign modernity with the clothes they wear and faded jeans and are in fact stuck in a medieval narrow-mindedness, reluctant to accept democracy and poll results? I think that between the Egyptian Muslim Brothers and the Tunisian Islamists of Ennahda there are other sympathies…Reader commentary (excerpt) in response to Ennahda and the Muslim Brotherhood 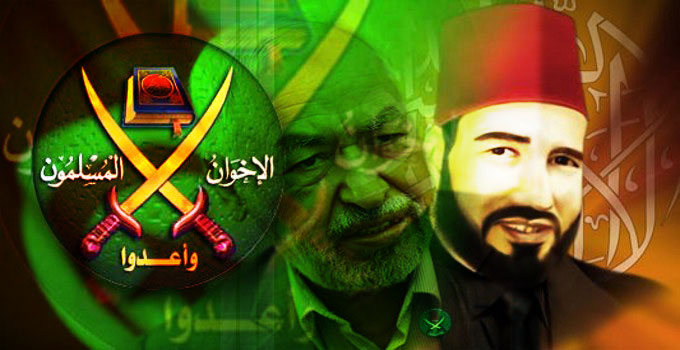 Perhaps the most accessible and well-balanced analysis of Ennahda’s connection to the Muslim Brotherhood is Lilia Blaise’s piece published on Nawaat last August. To use the word evoked by Larbi Sadiki quoted in the article, it may be that among Ennahda’s strongest qualities as an enduring political force and among its greatest distinctions from the Egyptian Muslim Brotherhood is not its willingness for consensus per se but more so its general prudence4 in navigating the many hurdles of politics—of political transition, no less. After the assassination of Chokri Belaid in February 2013,

Faced with public discontent, the party had to accept the initiative of its Secretary General, then Prime Minister Hamadi Jebali: to dissolve the government and appoint new ministers to state-designated posts … Instead of defending the legitimacy of the polls, the party seems to defend today [August 2013] the national interest by communicating the urgency of a roadmap for elections and the necessity that the Assembly complete a part of its work. Blaise, Ennahda and the Muslim Brotherhood

Ennahda has most certainly created a reputation for itself as a model of the successful convergence of Islam and democracy–at least on the international spectrum, where its perceived prioritization of national reconciliation has earned it CSID’s Muslim Democrat stamp of approval. In the case that there is indeed «an event or a press conference in Tunis soon to also announce the award in Tunisia and to answer any questions that the media might have about the award» as Masmoudi explained to Nawaat, it will be interesting to see how this recognition is perceived and interpreted by the Tunisian media and public. Certainly it is a relevant news item in the countdown to the second and final elections of the country’s transition period. In light of the religion-and-politics debate that Ennahda incarnates and previous discussions of Ennahda’s political presence and role in Tunisia, it is more likely than not that the Movement-Party will remain the object of much scrutiny in spite of worries that «the political scene seems at peace, the democratic opposition relieved, civil society reassured» to the extent that Tunisians are unconcerned by and oblivious to the activities and political developments of Ennahda, or for that matter to any of the parties who are well-placed in the polls.

1 “Contrary to the Brotherhood who refused a certain adaptation, the Ennahda party is in perpetual movement, which makes it a «party in transition,» as Italian researcher Fabio Melone analyzes it.» – Lilia Blaise, Ennahda and the Muslim Brotherhood, the Myth of Filiation

2 «In practice, the Ennahda party only gained 40 percent of Assembly seats and had to formulate a political strategy with two other parties thus forming the Troika.» – Blaise, Ennahda and the Muslim Brotherhood

«After interminable procrastination, the Troika and, at its head, Ennahda were forced to give way to a government of ‘technocrats.’ [‘national experts’].» – Slaheddine Dchicha, Help! Ennahda is Back!

3 “All of this is nothing but banter! How can one possibly “tunisify” these fanatics? Who do you think you are fooling? Ask them your questions! They will tell you that we must Islamize Tunisia!” – Reader commentary (excerpt) in response to Ennahda and the Muslim Brotherhood