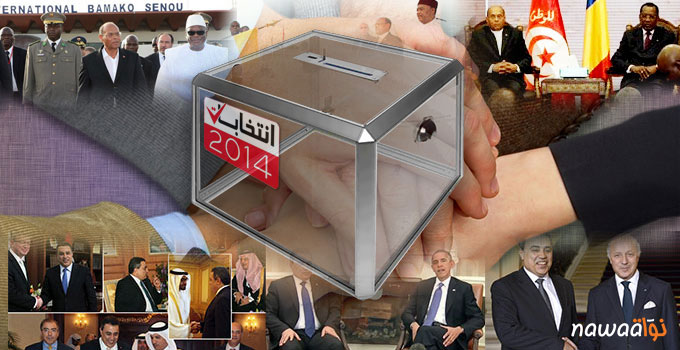 Public discourse—of technocrats at the Kasbah, ANC deputies in Bardo, politicians in electoral campaigns, experts and analysts in the media, ambassadors in diplomatic visits abroad, foreign aid institutions in research studies and grant agreements, is always fleeting and often unaccountable to daily realities of society. The appealing ideals and values carried in the public and political discourse around Tunisia’s transition ultimately ride upon the actions that are the signing of the constitution, the first elections in 2011, the fixing of the 2014 election dates, and now, nearing the actual voting period, registration that has begun week. Little time is left to indulge in projections and romantic visions of the future as the post-transition period is close and national media is frantic with the anxiety that precedes such a defining rite of passage.

As the country continues to grow its economic alliances without and the clamor and chaos of party politics fills the air within, citizens have begun registering to vote in the official countdown to the 2014 elections.

Expanding the Economy Cross- and Inter-Continentally

Prime Minister Jomâa has traveled far and wide to shake hands with cheiks, prime ministers, and presidents across the Gulf countries, the European content, and to the United States, while President Marzouki has followed suit posing for photographs with leaders throughout Subsaharan Africa—Mali, Niger, Chad, and Gabon.

On June 18, The Minister of Trade and Crafts hosted a conference on the Comprehensive and In-Depth Free Trade Agreement (ALECA) that is to serve as the economic base of the Tunisia-European Union «Priveleged Partnership.» A Business News article, «Tunisia-European Union Free Trade: Let Negotiations Begin!» details the main points that officials—including Minister of Trade and Crafts Nejla Harrouche, EU Ambassador to Tunis Laura Baeza, the Director of Tunisia-EU Relations within the ministry Fatma Oueslati, and Sofia Munoz of the European Commission—and civil society members discussed to the end of «gradually integrating the Tunisian economy in the unique EU market.» Among the objectives highlighted in the article are the creation of initiatives that favor European investments and the reform of services, customs procedures and economic governance «in order to assure reciprocal access to open, transparent markets on both sides, at all levels and in all sectors of the economy.» With an emphasis on strengthening agricultural and energy-based trade, the adoption of practices that promote sustainable development, and in observance of regulations in place through the Euro-Mediterranean Association Agreement of 1995, ALECA is designed to reinforce the already-tight Tunisia-EU economic bonds.

‘The Answer is Simple: Turn to Africa!‘

That «the European Union is Tunisia’s first economic partner,» the destination for 71 percent of Tunisia’s exports and the source for 55 percent of the country’s imports in 2013 is a trend that must, according to Business News, be complemented by the strengthening of Tunisia’s regional economic relations. Citing several factors that mitigate economic growth, a separate article, «African Growth, Tunisia’s Remedy» asks,

…what to do when 80 percent of the country’s trade is with Europe, the partner who makes [for Tunisia] on average approximately one percent growth while Tunisia must reach six to seven percent growth in order to resolve its problems and make up for lost time? Imen Nouira, African Growth, Tunisia’s Remedy

Marzouki touches down in four Subsharan countries this week with a delegation of entrepreneurs and representatives of private and public businesses to promote the «sustainable integration strategy» that has been proposed by the Arab Institute of Business Leaders (IACE). IACE’s study, «Strategic Tunisia-Africa Renewed» published last June, notes the consequential absence of a Tunisian bank network in Subsaharan Africa that is representative of the country’s deficient economic regional presence.

There are 8 bilateral agreements concerning the countries of Subsaharan Africa for the 49 between Tunisia and the rest of the world, 4 double taxation agreements with Subsaharan countries for the 34 that Tunisia has signed, no preferential trade agreements with Subsaharan governments, deficient airline connections in Subsaharan countries ([resulting in] the falling behind of Tunisair compared to competitors such as Royal Air Maroc and Egyptair), and the complete absence of direct maritime lines to eastern and western Subsaharan ports ([resulting in] delays in the transport of goods).Imen Nouira, African Growth, Tunisia’s Remedy

Several of the report’s recommendations are the creation of partnerships with French and Moroccan bank networks (which have a strong regional presence) until the country establishes its own bank network, and the elaboration of preferential trade, double taxation, investment protection, and free trade agreements. The study proposes the creation of twenty new Tunisair direct routes into regional hubs and cities where Tunisia does not have embassies, the building up of communication technology that will facilitate the coordination of maritime transport, and the southward deployment of Tunisia’s technology companies.

With pluralism buried, the country is moving less towards bipartisanship than towards a suspicious understanding. Seif Soudani, Political Review: Consensus: The Fear of Democracy

Even the expression of consequential economic woes has paled slightly as the announcement of fixed election dates has solidified the finite temporality of transition, the imminent fork in the road and uncertainty regarding the path towards which the ‘consensus’-driven country is steering—one of gradual progression through reform or stagnancy and gradual regression? With Nidaa Tunis heading the polls (hovering around tweny percent of projected votes) and the nomination of Beji Caid Essebsi as the party’s presidential candidate, multitudinous are contemplations about the party’s internal workings and dynamics with other parties, in particular those with whom it forms the Superior Commission for the Union of Tunisia (UPT). Formerly a conglomerate of five parties, the coalition has lost steam along the way: Al Jamhouri demissioned in December and now, in the confused reshuffling and strategizing of political parties preceding the official electoral campaign (4 October), Al Massar has strayed from the group.

The UPT is a broken machine; it no longer even exists, was neither an electoral body nor a political alliance. Synda Tagine, Trench Warfare Between Al Massar and Nidaa Tunis

The consensus that is so often invoked as among the keystone qualities of post-revolution politics that allowed for ‘successful democratic transition’ is certainly not now associated with the inter- and intra-workings of political parties. Both Nidaa Tunis and Ennahda have provoked concern that the country might return to the same political mascarade that the previous regime entertained—Nidaa Tunis for alliances with officials of the Ben Ali era and Ennahda for presumed affiliation with the Muslim Brotherhood and alleged complicity in terrorism.

If many are not convinced by the sincerity and capability of either party, their skepticism will not be assuaged by the little time remaining before Tunisians must face elections to decide the country’s future government. Monday marked the first day of voter registration, and, as per the Independent Superior Commission for Election (ISIE) proposed electoral itinerary, after lengthy debate and deliberation regarding separation or concomitance, the legislative election has been fixed for 26 October to be followed by the first round of presidential elections on 23 November and the second round on 28 December.

In the Countdown to Elections: Tunisia Oscillates Between Fulfilling and Feigning a Universal Ideal

…Tunisia risks reinforcing the flagrant disconnect between law and reality, risks sinking further into the chaos that a certain few cultivate in order to facilitate the return of dictatorship, be it a police state or moral oppression. Both parties ensnare public conscience in a contrived conception of democracy that will be nothing more than a new authoritarianism be it religious or secular in nature. Farhat Othman, Oppose the Return of Dictatorship, Demand a State of Law First, Elections After!