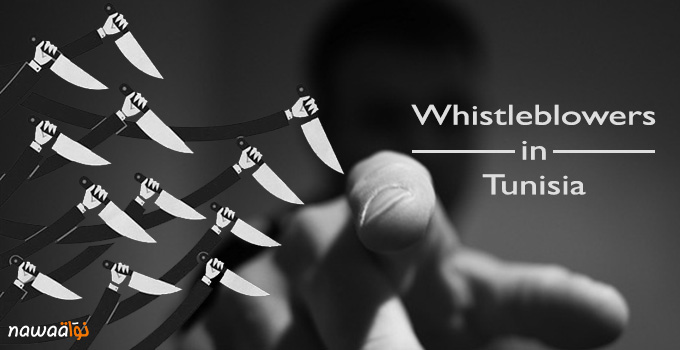 Whistleblower a person who exposes misconduct, alleged dishonest or illegal activity occurring in an organization … for example, a violation of a law, rule, regulation and/or a direct threat to public interest, such as fraud, healthy and safety violations, and corruption. Whistleblowers1 may make their allegations internally (for example, to other people within the accused organization) or externally (to regulators, law enforcement agencies, to the media or groups concerned with the issues).

Muckraker a reform-minded journalist who wrote largely for all popular magazines and continued a tradition of investigative journalism reporting; muckrakers often worked to expose social ills and corporate or political corruption.

While it is the first that has become globally translated and adopted, both terms fit well a discussion on the need for the protection of civil servants, corporate employees, writers, journalists, and any member of civil society in Tunisia who, by way of «principled leaking,»2 denounces institutional or systemic corruption. Two recent articles in Tunisian media call attention to the legislative and social inhibitors of whistleblowing, one published in April by La Presse de Tunisie after a conference on “The Legal Protection of Whistleblowers» organized by the Tunisian Association for the Fight Against Corruption (ATLUC), and the other from June 9 by Nawaat after the murder of Ministry of State Property and Land Affairs employee Anis Aziz two months after he accused the same Ministry of corruption.

There is a group specialized in the falsification of contracts. It is headed by the nephew of the former president who operates directly with officials from Central Management of Land Property and with the Regional Director of Land Property (…) Falsification operations have permitted access to assets associated with land titles Nº123935/Nabeul and 556015/Nabeul. Anis Aziz quoted in Anis Aziz Stabbed to Death: Did He Know Too Much About an Affair of Corruption?

In spite of a preliminary investigation and ensuing allegation that Aziz’ murder was not related to the information he posted on his Facebook page on March 31, family members, friends, and journalists suspect that Aziz’ is the most recent in the succession of Tunisian citizens targeted for their provocative revelations on maladministration. According to Nawaat, once these individuals have blown the whistle on unlawful or immoral activities of the implicated authorities or public figure(s), they find themselves in a social and legal vaccum, a no-man’s-land of «lawsuits, threats, public slandering, pyschological and economic pressures.»

As it is theoretically and practically in the best interest of civil society and the state institutions of a democratic society that citizens are vocal and active in the name of transparency and accountability, practices in the vein of whistleblowing, muckraking, and ‘principled leaking’ are not to be condemned but supported, the responsibles of exposing information previously undisclosed at the expense of the common good not excluded from but protected by the law.

No democracy, even less the nacent one, can ignore the important role that vigilant citizens, ready to call attention to any illicit or corrupt act, play in society. Henda Chennaoui, When the Acknowledgent and Protection of Whistleblowers?

Everyone has the right to freedom of opinion and expression; this right includes freedom to hold opinions without interference and to seek, receive and impart information and ideas through any media and regardless of frontiers. Article 19 of the Universal Declaration of Human Rights

In spite of Tunisia’s Law nº2008-16 of 25 February 2008 approving the United Nations Convention Against Corruption3 and adoption of a new constitution in January, public perception and legal processes have yet to embrace certain human rights and civil liberties to the extent that would render the country (from the outside-in perspective of the international community) the ideal model of successful democracy in the so-called Arab world. Legislation pertaining to the freedom of expression and the right of access to information and the implementation thereof remains unfavorable to individuals and activities that over-stir the proverbial pot as is apparent in a growing list of individuals who have suffered severe social, economic, and security repercussions for their revelations implicating the illicit operations of specific institutions or ministries. During the drafting process of the new Constitution, the independent, London-based organization Article 19 prepared several extensive legal analyses, the most recent of which was published in September 2013, which called for Tunisia’s National Constituent Assembly (ANC) to address «the insufficiencies in the third draft of the Constitution relative to freedom of expression and information.» One among the many recommendations in the twenty-five page document advised that «Whistleblowers should be strongly protected under the Draft Law or in a separate law in line with best practice in this area.»

At the time of the ATLUC conference in April, the Association’s President Ibrahim Missaoui expressed that the decree-law nº2011-120 of 14 november 2011 which ensures «the protection of informants to the end of protecting whistleblowers, witnesses, experts, and victims of corruption» is insufficient and will ideally be supplemented with a distinct law for the protection of whistleblowers. Representing the National Committee for the Fight Against Corruption (created accoring to the same decree-law in question) at the conference, Samir Annabi suggested that the elaboration of a new legal framework be accompanied by the development of communication technologies like those modeled abroad to guard the anonymity and security of principled leakers.

‘Principled Leaking’ – Whistleblowing Platforms
In the defence of freedom of speech and media publishing and the principles of Article 19 of the Declaration of Human Rights, Wikileaks is the original brand of communication technologies designed not only for the protection but the empowerment of whistleblowers, a means of the «principled leaking» that enables the publication and journalistic presentation of original source documents for public scrutiny. Several years after the Julian Assange founded the not-for-profit Wikileaks (2006) and precisely one year after the publication of classified NSA documents leaked by Edward Snowden (October 2013), The Guardian launched its own SecureDrop powered by the Tor and Tails technologies that Guardian journalists had used in Snowden’s case.

The first Leaksite in the Arab World has born #nawaatleaks by @nawaat using GlobaLeaks in Arab and French language! http://t.co/7sV5OM2uSp

In 2011 Hermes Center for Transparency and Human Digital Rights introduced GlobaLeaks, «an open source project aimed at creating a worldwide, anonymous, censorship-resistant, distributed whistleblowing platform.» It was with this software and according to the same principles of transparency and access to information that the Nawaat team created Nawaat leaks. Exactly one year after Nawaat published «Article 19 Demands that the ANC Address the Insufficiencies (of the Third Draft of the Constitution) of Freedom of Expression and Information,» the team announced «Nawaat Launches a Specialized and Secure Platform for Leaks.» In the context of the unrealized implementation of Decree-law n°2011-41 of 26 may 2011 relative to the access to administrative documents, Nawaat leaks was introduced as a tool to facilitate the release and publication of documents exposing the corrupt practices of the previous regime and to protect those whose efforts to do so are the continuing work of the revolution.

Indeed, in spite of this decree and the eloquent discourse on the fight against corruption, in spite of public expectations weighing on judicial proceedings against embezzlement and in spite of the desire for the establishment of transparent governance, Tunisians still do not have free access to administrative documents. Every day they bare witness to a blaringly deficient fight against maladministration. Even worse, we observe the court proceedings of those who attempt to expose corruption, the abuse of power, favoritism, and all of the evils that stem from decades ago, as much within the context of politics and the management of state affairs as in the business world. Sami Ben Gharbia, Nawaat Launches a Specialized and Secure Platform for Leaks

In a 1906 public address, American President Theodore Roosevelt alluded to the ‘Man with the Muck-Rake’ from Paul Bunyan’s classic novel Pilgrim’s Progress, calling for the «relentless exposure» of the economic and social ills that plague the body politic. That whistleblowing, muckraking, or principled leaking are not just the undertaking of a courageous few but in fact a social responsibility is the undercurrent upon which Nawaat is propelled to carry out investigative work and is also the underlying message that both recent articles in Nawaat and La Presse effectively articulate:

The most alarming is the negligence demonstrated by a political class [headed straight for power] vis à vis this ethic of whistleblowing that is without a doubt a normal reflex and a sign of resistence reminding us that past abuses were sustained by the silence and indifference of the majority. Henda Chennaoui, When the Acknowledgement and Protection of Whistleblowers?

Today we are living a citizenship mentality and one of the first responsibilities of the citizen is to protect the public interest …We must create a new culture that encourages denunciation and that, above all, puts an end to the tendency to believe that, if it constitutes a common good it does not concern us…we must change the mentality and promote denunciation made in the public interest, and this in the framework of a law that protects whisteblowers. Abdeljawed Harrazi quoted in We Must Protect Whistleblowers

2 The term ‘principled leaking’ used here is credited to Wikileaks

3 United Nations Convention for the Fight Against Corruption Articles 32 (Protection of victims, experts, and witnesses) and 33 (Protection of persons who communicate information) against the retaliation, intimidation, and unjust treatment of the persons concerned promote the physical protection, relocation and asylum, and preservation of anonymity and security through the use of appropriate communication technologies.