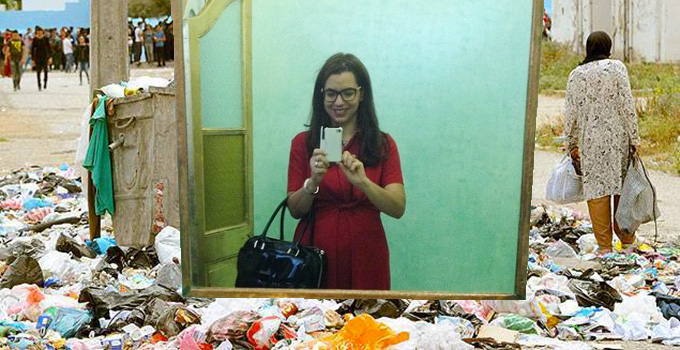 (The Absence of) Waste Management After the Revolution
If there is any visual that captures the state of social-political-economic flux in Tunisia, it is a landscape littered with mounds of trash, a geographic disorder that speaks of an underlying system that is struggling for equilibrium, to integrate and coordinate all of its components. For three years, as the country has been recalibrating political processes to the tune of democracy, the lack of consistency and regularity has left in some cases the infrastructure and the most basic of state functions, such as waste management, neglected and threadbare.

This degradation of the Tunisian ecosystem is even more manifest in urban settings where household wastes and materials litter our streets and our sidewalks, are carried into streams, deface our beaches and rare green spaces. This insalubrity, beyond its visual manifestation and repugnant odors, has inevitably negative repercussions in the quality of life and health of citizens as well as the activities of productive economic sectors such as tourism, agriculture, and fishing. GlobalNet, Tunisia: The Government Unveils its Clean-up Plan in Fifty Actions

On May 5, in a meeting hosted at the headquarters of the Ministry for Public Works, City Planning, and Sustainable Development, the Ministries of the Interior, Tourism, Health, Agriculture, and Industry convened to address, after three years of abandon, what has become an environmental health crisis with social and economic consequences. Participating government officials devised a plan of action* comprising «fifty concrete actions covering all aspects of cleanliness» that fall into three categories:

3 «Raise awareness and Engage the Population» : Elaboration of a communication plan in collaboration with civil society in order to promote awareness among the population and economic figures around public property issues and regulations concerning solid and hazardous waste, green spaces, left-over construction materials, etc.

Civil Society Responds to Ministries’ Call for Collaborative Efforts…with SelfiePoubella
Less than a month after the announcement of long-awaited initiatives to address the country’s growing pollution problem, Tunisians are still walking through trash-laden streets, eager for palpable changes in the landscape that will reflect the proposed plan of action. In the meantime, some citizens have embraced their role to implement, in the language of the initiative, «the ‘most appropriate’ means of communication,» which for the citizenry has meant a communication campaign to raise awareness amongst the very ministries who devised the plan of action. Ten days after the Ministery of Tourism was among those represented in the Public Works meeting, SelfiePoubella was launched.

If Karboul selfies are generally justified by the good touristic cause, this SelfiePoubella campaign is as much in the interest of tourism as it is of the citizenry because it calls quite simply to rid Tunisia’s cities of the garbage that litters the streets. Its objective is that the Tunisian citizen, as much as the tourist passing through, can enjoy clean public space. Let’s show the officials of this country the true face of our streets and the pollution of the environment. May 19 post from SelfiePoubella Facebook page

Institutional Accountability
A SelfiePoubella post from May 30 reads, “Let’s put pressure on the municipalities! But we mustn’t forget that they absolutely cannot succeed alone. Sustainable progress requires the active civic participation of all.” If the clean-up requires a collective effort carried by the citizenry as well as state institutions, the bulk of the weight, at least initially, must be shouldered by the latter.

…this crisis is essentially due to a complete or partial disfunction fo the different parts of the system for the protection and cleanliness of the environment in Tunisia. Even more, it is the institutional component that has been most affected and whose recovery will demand the most time and courage if we want to reestablish the normal and sustainable functioning of our sanitation system. HuffPost Maghreb/TAP, Environment: A New Municipal Police Corps Will Enforce Cleanliness

Secretary of State for the Environment Mounir Majdoub attributes the gravity of the situation to the devolution of ministries over the past three years and invokes the need for «the acceleration of elections for municipal councils representative of citizens within the framework of a real democracy that promotes accountability.»

The Selfie as the choice of action is a nod to the ‘passion’ that Amel Karboul has for this type of snapshot. And to the contradiction, often demonstrated by the Minister, between tourism-driven activities and the filthiness of the environment. Y.N.M., Tunisia: ‘SelfiePoubella’ to Denounce the Lack of Cleanliness in Public Spaces

The disparity reflected in the ‘Karboulmania‘ campaign, of which the Selfie is a primary vehicle of diffusion, that seeks to convey a new, ‘fun’ image of Tunisia, and the reality of inadequate basic public services that has worn on the quality of daily life in Tunisia, represents a frustrating disconnect; after three years citizens are still waiting for ministries to invest not just in the reconstruction of Tunisia’s external image but in the country’s basic infrastructure. SelfiePoubella is a reminder that, whereas the Ministry of Tourism has approached the nation’s transition and transformation with a focus on the external, the more appropriate order of operations requires first the rebuilding of vital internal functions and second an outward focus where the country’s image is ideally the natural manifestation of a healthily-functioning society. 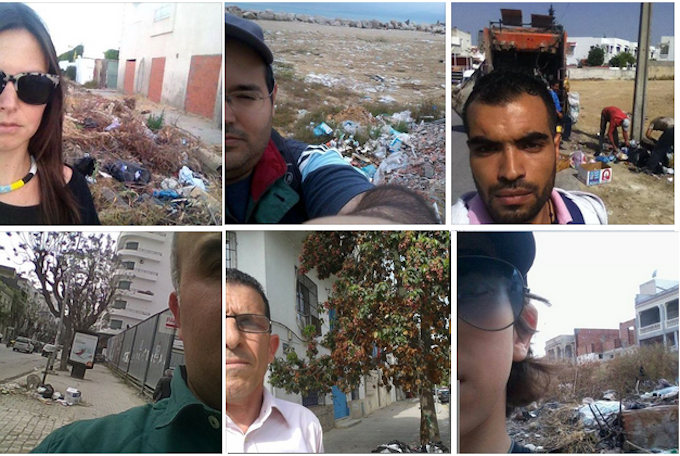 ‘The Landscape “Communicates” to People‘
The SelfiePoubella campaign prompts the government to pull back and initiate the only concrete changes through which the country can authentically live up to the image Karboul has worked to present to the world. Had the initial focus been a restructuring and reconstruction of basic infrastructures, in this case waste management, perhaps Karboul’s dynamic social media presence would seem less superficial and ill-fitted to citizens’ (and now tourists’) daily reality. How can society plan and work and develop efficiently and effectively when it operates in an environment of material disorder and uncleanliness? Certainly ambiant chaos has a bearing upon the way we think and feel about our communities, municipalities, and governments, in sum, our social geography. Indeed, from a sociological perspective, the well-being of the individual is inextricably tied to that of his society, a phenomenon illustrated by the Broken Windows theory which holds that a disorderly environment encourages human behavior that perpetuates a chaotic and uninhabitable atmosphere.

Consider a building with a few broken windows. If the windows are not repaired, the tendency is for vandals to break a few more windows…Or consider a pavement. Some litter accumulates. Soon, more litter accumulates. Eventually, people even start leaving bags of refuse from take-out restaurants there or even break into cars. Wikipedia, “Broken Windows Theory”

The aptness of the SelfiePoubella campaign is largely in the irony of its approach, in its twisting of the conventionally individualistic focus of the Selfie in general and especially in the context of the Minister of Tourism’s fetish for self-portraits that have propagated and diffused across the media landscape with as much efficiency as the garbage that has cluttered the Tunisian landscape.