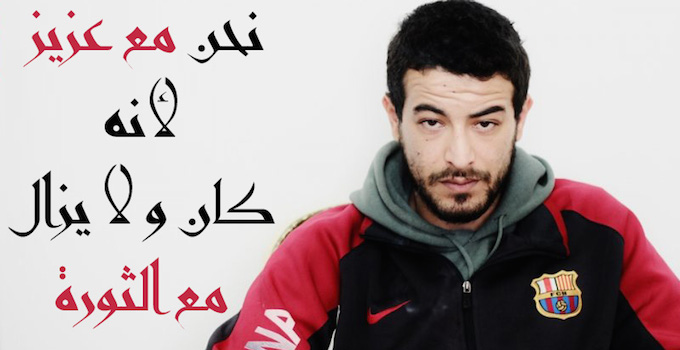 Thirty-one year old blogger and activist Azyz Amamy was arrested yesterday, May 12, 2014 in La Goulette, a beachside neighborhood of the capital. Some time between ten and eleven o’clock Monday night, Amamy and his friend, photographer Sabri Ben Mlouka, were pulled over and detained for the possession and use of marijuana.

One of the many young faces associated with the uprising in 2011, Amamy is widely known for his political activism (for which he was imprisoned under Ben Ali’s tenure), particularly his involvement in supporting the families of the Martyrs of the Revolution and his advocacy for the Youth of the Revolution. His reputation as a militant activist and dissident has earned him notoriety among authorities. According to several sources (among them Amamy’s father, Khaled), police had been after the blogger for some time, and, one source reported to Nawaat, had purportedly pronounced accusations even before the incident took place on Monday night that Amamy was guilty of marijuana use.

Amamy and Mlouka’s arrest has reinvigorated debate around Law 52/1992 which holds that a citizen found in possession of or having consumed narcotics may be sentenced up to five years in prison and fined up to three thousand dinars. According to Huffington Post Al Maghreb, both Amamy and Mlouka will be tested at the Charles Nicolle hospital and interrogated between now and Friday when they will appear before a judge.