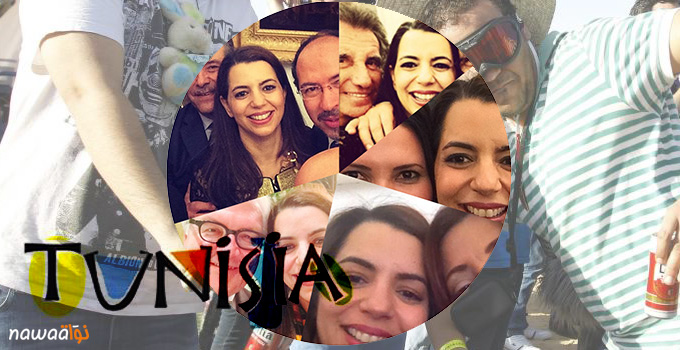 After what is nearing a two-week inundation of articles on the Djerba controversy and, if it is imaginable, an increased flood of Amel Karboul images, economic concerns remain the big question mark facing the «start-up democracy team» that is the Head of Government and his ministries. The omnipresence in Tunisian media of Karboul since beginning her work as Minister of Tourism three months ago is by no means a phenomenon isolated to the past two weeks, and articles on Nawaat and Al Huffington Post Maghreb have described Karboulmania, the strategic media coverage of the political figure who is to reinvigorate the country’s Tourism sector, that has washed over Tunisia since January. Written after the Minister’s eye-brow raising attendance at the Electronic Dunes festival in February, a Nawaat analysis that likens Karboul’s role in the Jomâa government to Beauty and the Beast, is ever pertinent in the midst of the most recent controversy that precedes (and has hopefully not sabotaged) the tourist season:

Since her nomination as Minister of Tourism, Beauty, in the truest sense of the word, has the whole town abuzz: politicians, media, social networks, and ordinary citizens have all added their two cents…Do the image embodied by our dear minister and the media spectacle in which she holds the lead role signify success? Yassine Bellamine, Amel Karboul – Media Construct of the Jomâa Government

Success will of of course be measured by the vitality of the country’s tourism sector and its contribution to economic recovery which is among the tasks assigned to the interim government. What does foreign media make of the Ministry of Tourism’s recent decision to regulate the entry of Jews carrying Israel passports into the country? How will a national debate that encompasses questions of ethnicity, religion, secularism, history, and international relations influence potential tourists to Tunisia? For better or worse, the Djerba controversy and Karboulmania that have overcome Tunisia have yet to titillate the international community; if they have penetrated foreign media, the effects on potential tourists appear yet negligible, and reports are charged with neither the spit nor flame of online articles and commentaries from Tunisian journalists and readers alike.

Last weekend at Carthage, the New York-based TED Talks held “The Differences We Make” which featured, among seventeen other Tunisian speakers, the Minister of Tourism. «Say yes to Tunisia» was the catch phrase of Karboul’s speech which constituted a personal story and not a political one, her appearance at the event of symbolic significance as opposed to a revelation of content-rich information about her work or the Djerba polemic. Referring to the group of speakers who participated in the event, the TEDxCarthage website notes, «In Tunisia today, this invisible network of people and ideas making a difference is more important than ever, as Tunisians struggle to meet the challenges of rebuilding their country.» For Tunisians, Amel Karboul is anything but invisible, her overwhelming media presence widely perceived as part of a media campaign to reinforce the optimistic, progressive image of Tunisia that is internationally marketed as a «Start-up Democracy.» If Amel Karboul has only just begun to shine in foreign media (and certainly TED Talks is no modest beginning in this direction), the reputation that, in her words, the “start-up democracy team” promotes seems to have dazzled foreign media enough to overlook the details of internal polemics such as that which surround the Ministeries and Parliament.

Start-up Democracy Sells
Two or three reports about the affair have circulated foreign media since last week. The Washington Post and several other news outlets dispense the same Associated Press article on «Tunisia divided over Jews’ use of Israel passports» which briefly describes «the first year that Israelis have been allowed to use their passports rather than a special document issued by Tunisian embassies» and is by way of contrast to Tunisian media miraculously sparse in Karboul references.

Unsurprisingly, the vast majority of English-language articles on the topic are found in Jewish media outlets, the primary source of which seems to be the Jewish Telegraphic Agency (JTA) out of New York, whose article is reproduced on several websites. The Jewish Daily Forward is one such outlet, which, in addition to the JTA article, features a video on «Tunisian Jews After the Revolution.» Published two days after the national economic congress, the article does not impose a strong point of view on the issue and focuses on the Ministry’s decision to regulate the entry of Jews carrying Israel passports as opposed to the continuing debate, and the video highlights the thriving, if small, population of 1,500 Jews in Tunisia.

Amidst a handful of reports (Libya and Tunisia: Not All Revolutions Are Created Equal, Tunisia A Beacon For Arab World, What the US Can Learn From Recent Progress in Tunisia and Stumbles in Egypt) from the past month comparing ‘Arab Spring countries,’ (as what is purportedly a lesson in how to build democracy), Tunisia is qualified as the gem among nations undergoing democratic transition processes. Without alluding to the polarization of the Ministries and Parliament and what seems to be a mounting notoriety of the ANC, the authors of these comparisons seem, as per usual, satisfied with blanket statements and buzzwords such as ‘secularism,’ ‘democracy,’ and ‘progress’ to portray Tunisia as a model country in the Arab world. The portrait has apparently been swept up by tourism-based reports and agencies.

With a democratically elected government, a famously tolerant society, an educated citizenry, and a sizable middle class, this is the one Arab Spring country that just might emerge as a success story. Joshua Hammer, Tunisia: The Next Big Travel Destination

Big-name American media outlets such as Condé Nast Traveler and USA Today portray a Tunisia that is at once safe and familiar, rare and exotic. A Condé Nast Traveler piece published in January paints an idyllic portrait of the country, invoking a reassuring-to-the Western world tale of dictatorship-to-revolution-to democratic transition, and also appealing to a romantic sense of adventure and exploration of the unknown. Posted well before the Djerba controversy, the article touches on the region’s religious tensions and, in the same way that the Associated Press and the Jewish Telegraphic Agency allude to political division but emphasize the Ministry’s decision to permit the entry of Jews carrying Israel passports, Condé Nast leaves readers with the sense that, in spite of political contention, pluralism and inclusiveness prevail in Tunisia.

Residents worry about the protests Salafists have mounted in front of the Grand Synagogue in Tunis, and hardliners in Parliament have tried—so far without success—to write a law into the new constitution that would criminalize contact with Israel. But multiculturalism still rules in Djerba. Joshua Hammer, Tunisia: The Next Big Travel Destination

‘Tunisians are ready to welcome travelers back to their country’
In the midst of worries that the controversy might spur ill-will among potential tourists, a USA Today article entitled Could Tunisia be the next big travel destination? indicates that in the wake of revolution and even as the government continues to handle terrorism, the country is ripe for tourism. The author explains, «In a volatile region, terrorism is a primary challenge facing the tourism industry,» and that Tunisia is overcoming this threat thanks to the government’s security measures.

The proliferation of Karboul propaganda that is part of a larger media campaign featuring its own contribution to the We Are Happy movement, «Happy (We Are From Tatooine)» (created by the Ministry of Tourism), and the trend of—what one commenter referred to as «Karbolie»–Karboul selfies on Twitter, indicate that not only has the Ministry of Tourism undertaken with gusto but with impressive efficacy its short-term endeavor to breathe life into its ‘fun’ reputation and thereby diffuse its presence into the public conscience.

The reformed Tunisia that has begun to materialize in foreign media is an open-minded, culturally diverse, geographically stunning and historically rich country. Certainly the Start-up Democracy team has succeeded in its national Karboulmania media campaign, and now perhaps the effect will percolate the intended international conscience. The degree to which the ‘rare desert bloom’ image will draw the country’s Tourism sector into a profitable direction will become apparent over the next several months as the tourist season unfolds and in particular once the Djerba pilgrimage takes place on the eighteenth of this month.