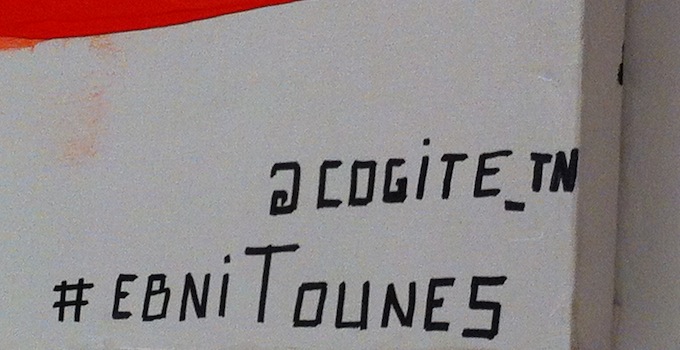 A series of eight speaker conferences has begun in the Berges du Lac area of Tunisia’s capital. A project of Global Shapers Tunis, Ebni Tounes, («Build Tunisia») aims to «stimulate a constructive dialogue around ideas and solutions that help address some of Tunisia’s more pressing challenges.» Based on attendance, the first session of the series appears to have been a success, as the small, bright Cogite Coworking Space was filled to capacity. Al Bawsala co-founder and president Amira Yahyaoui was the featured guest of the evening interviewed by Al Huffington Post Maghreb Editor-in-chief Houeida Anouar who appropriately introduced her guest by mentioning that she needed no introduction as most people are familiar with her work and the role of Al Bawsala since the very first days of the National Constituent Assembly (ANC) meetings. 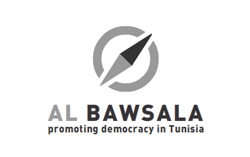 Indeed, the names Amira Yahyaoui and Al Bawsala («The Compass») are familiar to Tunisians and fairly anyone who has followed events in Tunisia since 2011. For those who do not know, Yahyaoui and the Al Bawsala team’s singular evolution and role in politics are a working model for civil society in action. Twenty-seven years old at time that the organization began its work in 2011, Yahyaoui had been active on the political scene to the extent that she was named among the eight «women who have changed North Africa and the Middle East» in the 2012 Global Leadership Awards for «her work as a blogger and her militancy against censorship.»

Al Bawsala was born on October 22, 2011, one day before the first elections after Ben Ali had relinquished his place as head of state. The organization’s website, accessible in Arabic, English, and French, provides a clear breakdown of its principles, approaches, and main objectives:

Transparency and Governance, the irresistable title and theme of Tuesday’s conference, was just the hook to draw a fairly diverse group of young Tunisians and foreigners who mingled before and after the interview in a mix of English, French, and Arabic. The interview itself was conducted in French (with the occasional Arabic and English interjections). Discussing the work, responsibility, and risks that Al Bawsala has taken on during the past couple of years, Yahyaoui answered questions about the organization’s origins, challenges, financial backing, and how it has been perceived by members of Parliament and Tunisian citizens. What follows is an overview (and notably not a word-for-word transcription or translation) of the interview which by no means captures Yahyaoui’s spirit and poise as she addressed her young audience, nor the spirit and engagement of attendees (and certainly these individuals would have good insight to fill in gaps and flesh out ideas and their comments here are encouraged) but hopefully conveys the essence of Yahyaoui’s musings about Al Bawsala’s role in Tunisian politics and society.

Making Room
How was a non-profit organization able to make a place for itself in the political scene at the time that the ANC – the first legitimate political power since Ben Ali’s regime — was just beginning its work?
Al Bawsala began its work on October 22, 2011, the day before the first elections. We never asked for the right to enter [to be present at the ANC meetings]; we entered — that’s all. It was logical that this belonged to us. During the first days of the meetings, we did not even know who the deputies were. Men antoum? we asked — who are you? To the mixed reactions of parliament members, we wrote a biography about each one with the goal of identifying precisely what deputies were searching for in the new constitution. We always named the deputies and were criticized for pointing out specific individuals and labeling them, for example, as ‘conservative’ or ‘liberal.’

Al Bawsala and the ANC
There were some deputies who were very open our work, such as Mehrezia Labidi. Some of the members did everything they could so that we could be there, while others attacked us for making information available to the public. Over the course of two years, responses changed and some who were against our work grew to support us, while some who had been supportive at the outset grew to be against what we were doing.
Some were accepting of our presence at the meetings and aware that what they said would be made public to the extent that we were told, «Go ahead, tweet this,» to the extent that we had to consider the limitations of transparency. The simple fact is that the deputies were not there to represent themselves…Transparency in and of itself does not limit freedom of expression—only the person can limit his or her own freedom of expression.

Impartiality
It is an insult to presume that Al Bawsala should be neutral — we work hard to hire passionate individuals who are not neutral and we have done a tremendous amount of lobbying in alignment with our principles. We share the same values within the organization even if, for example, we associate with distinct political parties or vote differently, and we limit ourselves to focusing on these shared values and to advocating for rights and ideas accordingly.

Youth
We don’t recruit anyone to work for the team who is over thirty years old. Yes, this is discrimination, and we pass up some very good candidate profiles to offer positions to youth, because youth have another way of looking at things, they dare to take on what an older person might not…Even being young we can still be serious.

Professionalization / Model of Sustainability
Our work schedule is not fixed…in Tunisia people seem to think that civil society is a weekend pastime. On the contrary, we work around the clock, we work everyday, we must be there for every debate. However everyone at Al Bawsala receives a salary; civil society can and should create employment, and we intend to be an example for civil society. We are able to pay our employees because we are well financed every year and have received funding from a number of international institutions such as the National Endowment for Democracy (NED), Open Society Foundations, and Oxfam, but we set the conditions for our funding – we have, for example, refused support from certain institutions for the logos that they wanted us to display advertising their contribution. Admittedly we do not have Tunisian funding because very few people have funding resources here, and very few people who have funding resources represent ‘clean’ sources of financial support.

Looking Forward
Now that the new constitution is in place, what will be Al Bawsala’s work?
First of all, there is still work to be done on the constitution. There remain several «stupid laws» that must be changed — to name a few: a woman cannot leave the country with her children without the permission of her husband whereas a man can legally take his children abroad regardless of the mother’s consent; a one-year prison sentence is punishment for smoking marijuana; the rich don’t pay taxes but the poor do.
Secondly, Al Bawsala’s primary function is not to monitor the constitution, but parliament. We will always have work to do. Decentralization will be a big part of our work. Right now there are sixteen local collectives, but eventually there will be a hundred or so.

A «Simple» Question
What is your vision for Tunisia?
Tunisia is capable of demonstrating that human rights can be universal, and this is our role in the Arab world. We must create employment, and implement what we put into writing. What we have in our favor is that current politicians are not used to politics and can be pushed to accept the needs and rights of citizens. And there is no better judge to hold politicians accountable than the citizen. When we make information public, people know what is going on. Transparency must become obligatory.

Yahyaoui will soon be retiring from her position at Al Bawsala because, as she explained, in so many cases and to the detriment of organizations, founders «are not able to let go.» The task to secure a replacement president looms ahead, and for now Yahyaoui is not yet certain what she will do after Al Bawsala. Needless to say much work lies ahead for the organization, and those present at Tuesday’s event were fortunate to get a glimpse into the tasks accomplished over the past two years as well as the tasks at hand.

What was clear by the end of Tuesday night was the reality that civil society is not just a weekend pastime. It is an around-the-clock way of living and engaging within one’s social and political environment to ensure that government operates with integrity on behalf of citizens’ rights and values. Certainly one way of contributing to this effort is to participate in activities and discussions highlighting issues that affect all members of society, in attending, for example, public events such as the one realized last week by Ebni Tounes.