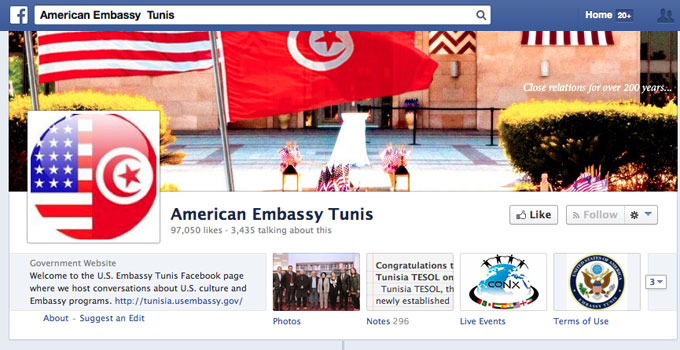 Welcome to the U.S. Embassy Tunis Facebook page where we host conversations about U.S. culture and Embassy programs.

After perusing the American Embassy Tunis Facebook page, the page welcome statement seems either a laughable euphemism or an endearing show of naïveté. The description is accurate to the extent that the the page accomplishes what it promises and what one would expect from an embassy Facebook page, for it serves as a cultural counterpart to the official Embassy of the United States Tunis website’s services and procedural information and news updates. According to the Terms of Service, «The purpose of the U.S. Embassy Tunis Facebook Page is to to provide information about the United States and the activities of the U.S. Embassy in Tunis, Tunisia.»

Naturally the page is a resource most pertinent to Tunisians interested in traveling to the United States for tourism or educational purposes, or for those who have been and wish to remain connected. Occasional security announcements posted in English are specifically designated for American citizens in Tunisia, though contributors to conversations indicate that the page’s most frequent visitors are Tunisians. In light of the responses provoked, it would seem that security messages were prompts designed for a debate class on US-Tunisia relations. Were these the conversations that the US Embassy Facebook authors were anticipating when they wrote their welcome message?

The United States and Tunisia have enjoyed close relations for over 200 years and we continue to work to strengthen this friendship. We share a commitment to the people of Tunisia to build democracy, to expand prosperity, and to strengthen security.

The assertion that is so common to US discourse on Tunisia-US relations has become a central if unintended component to Facebook discussions. The American Embassy Tunis Facebook page is an online space for notes of cultural interest, exchange opportunity information, political and security updates, and, most importantly, as alluded to in the welcome statement, relevant and revelatory conversation.

Recent topics of cultural interest include posts on the appearance of Tunisian Olive Oil on market shelves at Trader Joe’s, Lupita Nyong’o‘s words after winning an Oscar (to which one reader commented, «How About Leonardo DiCaprio? Just give that man an Oscar»), and, of course, «We Are Happy From Tunisia» videos that have made news in the United States.

It is perhaps an understatement to note that most Americans would be impressed by Tunisians’ knowledge of American culture. Certainly geographical setting is a significant determinant in the extent of Tunisians’ knowledge about a variety of cultures across the map. The fact that several languages — English, French, Tunisian and Modern Standard Arabic — constitute the text of the Facebook page is reflective of a society whose capacity for information about the world outside its borders is tremendous. In this context, a recent post with a link to the official embassy webpage responds to the unsurprising question «Why do Many Americans Speak only English?» Interested readers will find in the answer that the US does not have an official language although English is dominant because, contrary to Tunisians, «most U.S. residents do not need to speak another language to communicate with people nearby.» Whether or not this is true and whether or not this is a reasonable justification for fluency in only one language is, to say the least, debatable. If the majority of Americans are not multilingual, at least the American Embassy in Tunisia does publish information and announcements in three languages. Nonetheless, language is among the themes of cultural interest and discussion throughout the history of the Embassy’s Facebook comments.

A bit of investigation on the United States Embassy Tunis webpage reveals that travel to the United States as a tourist or as a participant in an academic or professional exchange program is perhaps more accessible (at least relative to the procedures for France, for example) than many people assume before researching travel options. The Facebook page is a useful resource for Tunisians who plan to go abroad as it offers links for exchange program information, reminders for application deadlines, and testimonials from exchange program alumni. Photographs submitted from Tunisians studying and working abroad and photograph albums documenting the projects and work of previous participants post-travel are evidence of Tunisians who have taken advantage of the opportunities vaguely touched upon in political discourse and advertised on the official and Facebook webpages.

Recent posts in this genre include a reminder for the CEMAT Research Grants application deadline, photographs of the current Thomas Jefferson Scholarship Program scholar celebrating his birthday with his host family in the United States, and images depicting the Two-Way Exchange Program to support the inclusion of the disabled in all areas of society, as well as Study of the U.S. Institute alumni celebrating International Women’s Day.

To a limited extent the Facebook page offers a glimpse into Tunisia-US diplomatic events, especially in terms of security cooperation which is keystone element of US support/interests in Tunisia. Several images of February’s Sponsors Training for the Tunisian Public Order Brigades (BOP) of the Ministry of the Interior accompanied a brief description of the event and INL Deputy Assistant Secretary Todd Robinson’s remarks, “The landmark agreement [between our two countries]…provides substantial U.S. funding to support the Ministry of Interior’s efforts to build its operational capacities while working to develop a more transparent and responsive police force.”

The functions of the United States Embassy Tunis official and Facebook websites are generally distinctive from and complementary to one another, though some cross-over has been cause for confusion, especially pertaining to official Embassy announcements. It is to be expected that important security and political updates are posted on the official website, but a statement on the Facebook page from December 30 last year was newsworthy enough for TunisieFocus which published an article entitled «The American Embassy in Tunis denies, on Facebook, the Participation of American Forces in the Arrestation of Abou Iyadh.» Summarizing the statement, the author of the article asks «why has the Embassy limited the publication of this text to Facebook only whereas the Embassy has an official website that is presumably more credible?»

Another article on Tunis Times highlights the security alert that the Embassy posted on Facebook recommending that “U.S. Citizens should review personal security plans; remain aware of local events; and monitor local news stations for updates. U.S. citizens should maintain a high level of vigilance, take appropriate steps to enhance personal security, and follow instructions of local authorities.” The piece features several from among a string of comments following the US security announcement that reflect sentiments and responses ranging from offended:

Although you have committed some of the largest massacres in the world.. Hiroshima.. Vietnam.. Iraq.. Afghanistan.. the people of these countries have to forget what happened to them.. However, Americans pray for mercy to their dead in the events of September 2001 every year .. to remind the world what Al Qaeda did.. to tarnish the image of Muslims.

Yow America, Tunisians are very peaceful people. We’re not Afghanistan Or Iraq. We’ll keep peace as long as you keep it.

…to simple and subdued :

Don’t worry about your citizens. Everything is good in Tunis. 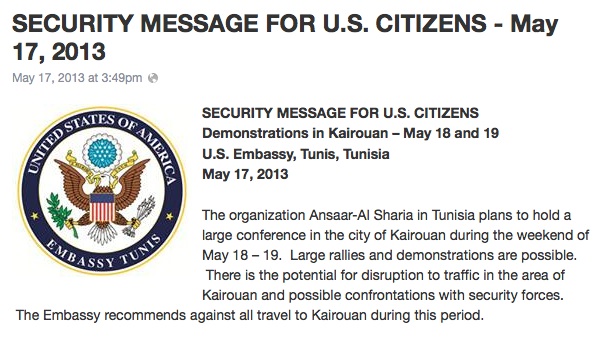 Other security alerts, including one from March 17, 2013 and another following the burning of the US Embassy in 2012 have merited a similar range of responses (including the one above from Kairouan), almost entirely from Tunisians, a large number of which ripost, in varying shades of contrarianism, the announcement with affirmations of Tunisia’s safety.

Indeed, it is all things security-related that prompt the most interesting responses on the Facebook page which provides an open forum where the official embassy website does not. Whereas the bulletin-board likeness of the Embassy webpage provides a useful resource and springboard, the Facebook page allows for interactivity, (albeit limited) dialogue between the embassy and Tunisians, and offers a glimpse into how US presence in Tunisia is perceived by its citizens. Although a large proportion of the responses are written in French and Arabic, American citizens in the US and in Tunisia would do well to utilize the Facebook page to learn a bit about US activities in Tunisia and Tunisians’ opinions and perceptions about these activities. The beauty of Facebook is of course the space it provides for far-reaching and instantaneous discussion on current events and issues. What would enrich the daily conversations that unfold on the American Embassy Facebook page is the presence and participation of American citizens both as readers and contributors to the discussions which are, more often than not, relevant to Tunisians and Americans with different travel experiences and a variety political, religious, economic, and social backgrounds.