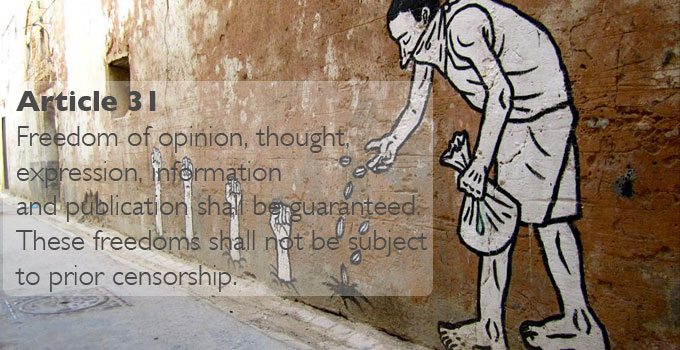 Freedom of opinion, thought, expression, media and publication shall be guaranteed. These freedoms shall not be subject to prior censorship.Article 31 of the New Constitution

Many Tunisian artists will say that things have not changed for filmmakers, writers, painters, comedians, photographers, and musicians since the revolution, that in spite of the provision for freedom of expression in the new constitution, implementation of Article 31 remains to be seen. Two themes that prevail in blogs, reports, news articles, and interviews about art and artists in Tunisia are (1) the gap between politics and people, especially youth and individuals who vocalize issues of unemployment and disparities associated with poor neighborhoods and regions throughout the country, and (2) the criminalization of art since the revolution, specifically under pretexts and accusations of drug consumption and/or affronts to public decency, to imprison artists and stifle their intended messages, as a return to practices of the pre-revolution regime.

In the wake of Ben Ali’s relinquishing of power, a public concert featuring a gamut of Tunisian artists and performers merited a rare show of overt political support for rap music. An article entitled Banned Tunisian Rappers Retake Stage reported on Secretary General of the Democratic Party Maya Jribi‘s public statement that «rap music is the culture of the youth who made the revolution and who showed their capacity to overturn obstacles and break ties with the past.” In the past three years, such remarks are common in discourse on Tunisian rap, though not generally from the mouths of politicians. Most often it is journalists–such as French-Tunisian Hind Meddeb who was arrested for her avid and open support of rapper Weld El 15–who advocate for the importance and integrity of rap artists in Tunisia. In an RFI.fr article, Meddeb is quoted, «Tunisian political parties today don’t represent the Tunisian population, they don’t represent the popular quarters, they don’t represent youth. Most Tunisian politicians are more than seventy years old. In one Phénix song that I love, they say that we are governed by dinosaurs. Indeed, since seventy percent of the population is under thirty, Tunisians are governed by dinosaurs.»

There remains in the country a tangible disconnect between the work of artists and the work of politicians. One young artist points to this difference half-jokingly noting the discrepancy between Tunisian street art, films, music, and, in contrast, politics–or what he refers to as the (much better paying) art of lying. A LeMonde.fr article last year reported that “Some Tunisian artists regularly denounce police pressure and accuse the government…of wanting to cut freedom of expression invoking «attacking moral values or the sacred…qualifying these pursuits as ‘the alarming and retrograde return towards the practices of a police state against which Tunisians fought in the revolution in January 2011’.» This return of authoritative power directed against freedom of expression is particularly poignant because it seems to target the very authors revolution who struggled specifically for democratic rights and liberties.

Bridled under Ben Ali, incensed after his fall, Tunisian rap is witnessing–at the moment of political transition–a backlash. Here it is criminalized, marginalized, even if it is just as full of spirit and remains very popular amongst youth.Elodie Auffray

Headlines such as «Tunisia’s Rappers Provide Soundtrack to a Revolution» and articles describing how «hip-hop brought down a dictator» are indicative of the role that rap and hip hop culture have played in calling for change. Hamada Ben Amor, popularly known as El General, earned enough media attention for his arrest in the last days of Ben Ali’s era that in 2011 he was named among “the most influential people in the world” by Time and his song «Rais Elbled» referred to as the “anthem of the Jasmine Revolution.” In an interview report published on Spin.com, El General reflects, “I had to continue…A rapper here is like a journalist. Rap reflects the reality of Tunisian society. It’s the only music that supported the revolution. The youth appreciate that.” Rapper Weld El 15 along with three other artists who were a part of the making of «The Police are Dogs» were sentenced to two years in prison for «complicity in a plan of violence against police» and «affront to public decency.» The list of rappers who have been charged with similar accusations of slandering and plotting to commit violence against government officials, and affronting the sacred and/or public decency includes Klay BBJ, Phénix, Maddou, Emino, Mister Mustapha.

Cinema
There is no question that filmmakers and film production in Tunisia are monitored and that content and subject matter explored and captured on camera are filtered for public viewing. Several notorious cases of arrests since the revolution have roused the sentiment that freedom of expression has not been honored during the country’s democratic transition. A track record of accusations and arrests similar to that associated with rap in Tunisia is characteristic of film and cinema, and is epitomized in the September 2013 arrest of filmmaker Nejib Abidi, sound engineer Yahya Dridi, director Abdallah Yahya, and composer Slim Abidi for the «consumption of narcotics». Around the same time last year, the comments of Fathi Kharrat of the Ministry of Culture in response to «Blue is the Warmest Color» by French-Tunisian filmmaker Abdellatif Kechiche are indicative of the state’s selectivity in what is made available to public audiences. Kharrat (who was addressed in an Open Letter to Mr. Fathi Kharrat and His Complices, the Thought Police!) was quoted, «This film was prohibited for minors under the age of seventeen in the United States. So I really don’t see how it could be showed in an arab-Muslim country like Tunisia.»

Taming Cinema…Through Assimilation?
In an Open Letter to the Minister of Culture Mourad Sakli Regarding the Film Sector, one filmmaker emphasizes what he describes as the Ministry of Culture’s attempt to institutionalize cinema in Tunisia, to assimilate the sector as a profitable industry that directly serves and benefits the state. Instead of supporting independent filmmakers and artists to carry out their own projects, state reforms imply the monopolization and commercialization of cinema into an industry which follows a current of artistic and socio-economic marginalization that the revolution sought to counter. When asked about his views on the proposed reforms, one filmmaker posited that potential advantages that might ensue from the so-called industrialization of cinema in Tunisia include the regulation of authors’ rights and reinvigoration of the movie culture which has become so diminished with the prevalance of piracy. He sees that more state funding and regulation for the film sector might revitalize movie culture by enticing the public to frequent movie theaters and promote economic sustainability for filmmakers.

Graffiti in Tunisia? It exists?! Of course it does. It’s still young but has the spirit and freshness of the youth. Not to mention the fact that January’s revolution gave it wings.Sophia Fatcap

An optimistic article published on Fatcap in April 2011 describes the end of the Ben Ali regime as a new beginning for freedom of expression, that «the fall of Ben Ali took with it the fear of repression…Exit dictator. Long live freedom of expression.» At the time the article was written, graffiti artists Meen-One and SK-one were busy with commissions to depict the revolution on empty public walls at home and abroad, and were simultaneously preparing for the ninth annual Spring arts festival in La Marsa. 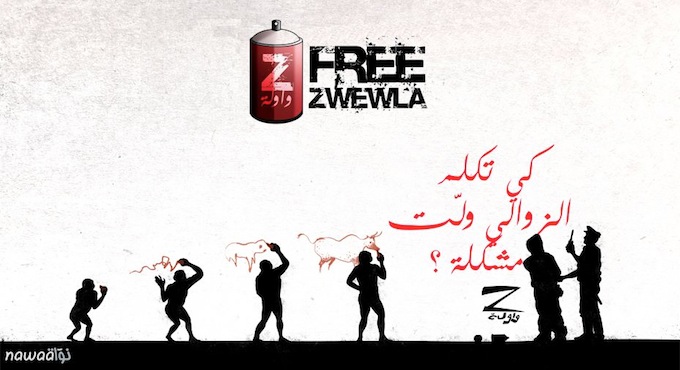 Formed in 2012 by Ouassema Bouaglia, the street-art collective Zwewla is committed to representing Tunisia’s poor populations. In Bouaglia’s words, «We don’t believe in politics! Politicians debate Islam, secularism, while our problems are socio-economic. Our demands are those of people who are in the same situation as us.» On November 3, 2012, Bouaglia and another Zwewla member Chahine Berriche were arrested for tagging a wall in Gabès with «the poor man is the living dead in Tunisia.» The artists were accused of tagging public property without authorization, breaching the state of emergency, and propagating false information that undermines public order. The day before their trial last April, a letter from the Committee of Support #FreeZwewla was published on Nawaat, anticipating the implications of their culpability: «If a prison sentence is announced, the message conveyed by the Justice will be clear: artists no longer have the right to express themselves freely. It’s a political process that reminds us of the methods used under Ben Ali (propagation of false information) to keep us silent.» Ultimately the first two charges against the artists were dropped, and the young men paid a one hundred-dinar fine each on the third count against them.

There are a slew of Tunisian graffiti artists–Meen-One, SK-One, Ir7al, El Seed–whose names and work have become keystones of the street art scene. This month, a «Graffiti Tounsi» exposition put on by the Maison de Tunisie Foundation in Paris features the work of Meen-One, SK-One, as well as two other Tunsian artists Ink-Man and Va-Jo.

If artists abandoned their work, the dictatorship would return…Anonymous Tunisian filmmaker

What is apparent from interviews, articles, and news reports produced nationally and abroad over the past three years is that freedom of expression in its most creative and abstract forms is an ideal still limited in practice. Institutional and societal repressions at once stifle and inspire the art and artists in Tunisia, keeping film, music, photographs, and graffiti burning in the form of a counter-culture, a movement that seeks to breathe in spite of and perhaps equally draws breath from political and societal restrictions. Contemporary artists in Tunisia dedicate themselves to their talents and crafts, working to pursue their goals and live according to the unwavering values and principles that fuel their productivity. One young filmmaker who remains anonymous because, he says, what is important is not to promote his name but to convey his message, reflects on the objectives that compel his work; he has dreams to fulfill and an old politician who doesn’t share these dreams and doesn’t try to understand them could never represent him, that here or anywhere in the world and in any society or cultural setting he would be doing exactly what he does today and will always do the same: continue to make art.