With a population and surface area comparable in number and square kilometers respectively to the state of Georgia, Tunisia has produced seventeen versus the US’ thirty-seven or so videos inspired by Pharrell William’s international chart-topping «Happy.» Bizerte, Tunisia’s northernmost city, released the country’s first video onto YouTube on January 4, 2014. Two months later, a remix of the seventeen different We Are Happy From Tunisia videos is available courtesy of the Nawaat editing crew.

Since Williams released the original twenty-four hour music video at 24hoursofhappy on November 21, 2013, the Happy buzz has become a social phenomenon, a growing global movement which hails 486 videos from seventy-one countries, an official We Are Happy From webpage, Facebook page, and (@wearehappyfrom) Twitter account.

What does it mean to be classified among the ranks of contemporary social movements? The past several years of protests, public demonstrations, digital activism, citizen journalism and street art across the globe define the creation, manifestation, and role of social movements in our societies today. According to Diani and Bison’s 2004 definition, social movements are ‘networks of informal interactions between a plurality of individuals, groups, or associations, engaged in a political or cultural conflict, on the basis of a shared collective identity’. From Puerta del Sol to the Arab Spring to the Occupy Movement, several key commonalities are characteristic of movements since 2011: they are largely youth-driven, have a strong technological component, and occupy public space.

On October 25, 2011, The Guardian posted a letter entitled To the Occupy Movement: The occupiers of Tahrir Square are with you, an eloquent articulation of solidarity from Egyptian citizens and activists to American citizens and activists. Social movements of today implicitly and explicitly inform one another, now more so than ever because of the world’s growing internet connectivity and networking capacities through Facebook, Twitter, and YouTube. Participants and leaders of different movements have been able to document, share, investigate, connect, and communicate on all aspects of ‘grassroots’ mobilizations to demand political and economic reforms. We need not ask whether or not these movements have influenced one another (Note, for example an argument expressed in a Guardian article: «Critics of the Occupy movement have dismissed suggestions that they share many similarities with protests in the Middle East, arguing that the latter have been about liberation from tyranny while the former are focused on economic reform.»), but to what degree and how. Comparing stories and case studies from geographically disparate places helps us to understand and define what is going on in our own countries, cities, and communities. In the context of the string of movements that began in 2011, public discontent is centered around many of the same themes, as the aforementioned letter and other social analyses articulate. 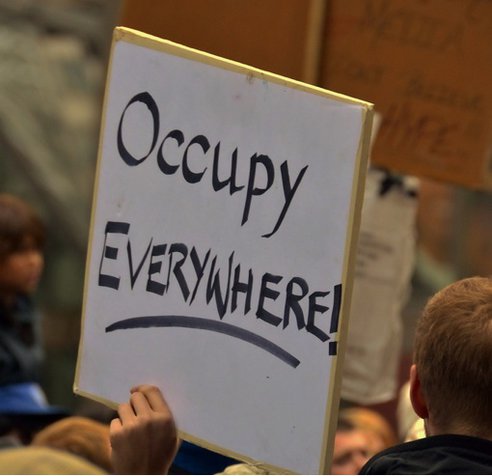 Social Movements for Culture, Identity, and Freedom of Expression

An entire generation across the globe has grown up realising, rationally and emotionally, that we have no future in the current order of things.Comrades from Cairo

There are some movements, those that seek political and economic reform, which reflect the more rational, perhaps more easily analyzed, response to public discontentment; other movements, those based upon freedom of expression especially through creative, artistic means, which reflect the emotional, perhaps more abstract response to public discontentment. In Tunisia and many other countries, the Harlem Shake epitomized the latter case.

Indeed, if «Harlem Shake» from California seduces youth, it is because it permits them to express, through shaking their shoulders, their legs and their bodies, their presence and unease in a world that goes against their dreams, wishes, and hopes…Samia Lamine

After the release of «Harlem Shake» by American DJ Baauer, Tunisian youth—much to the dismay of the Minister of Education—contributed to the surge of Harlem Shake videos posted on YouTube. Both the video, in which high school students from Lycée Père Blanc in Tunis implemented their version of the Harlem Shake meme, and Abdellatif Abid, who condemned the film as unacceptable and announced a school-wide disciplinary investigation, provoked a controversy at the core of which was the right to freedom of expression, and which polarized those who saw the videos as inappropriate, lewd, and morally inoffensive, and those who saw the interim government’s response as an insult to youth in particular who were a driving force in the country’s revolution for a more just and democratic society.

A number of articles emerged on the topic, and one Nouvel Observateur contributor’s dissection of the phenomenon offers pertinent insight into what might otherwise have remained an underexplored and undervalued social movement at least from the Western media perspective: «Diffusing and reproducing this type of video is made possible today by a technology that is increasingly accessible and democratic…This responds to the need felt by a growing number of internent users to participate in a collective, global event, and in doing so to belong to a vast community that shares the same references…in sum, to find one’s place within collective history.» 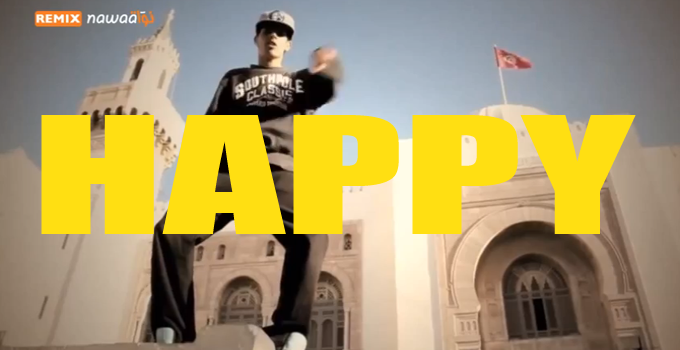 Although it may not have been Williams’ original intention, the Happy movement fits just right into the aftermath of political and economic protest of the past several years, and, contrary to the Harlem Shake phenomenon, it fulfills a need for freedom of expression, street art, and claiming public space in a keenly unprovocative and inoffensive way. An upbeat ode to both individuality and solidarity, it poses a perceived threat to authorities neither in its content (like the ever-popular Houmani by Kafon) nor in its presentation (as did the Harlem Shake at Lycée Père Blanc).

In fact, part of the meme’s novelty is its utterly simple and uncustomarily wholesome theme, an unconditional and universal happiness, a momentary relinquising of political, economical, social discontentment to express other equally potent sentiments and qualities of society; the quotidian experience of being in one’s town or city, of belonging to that place and claiming one’s niche within it.

A description accompanying Nawaat’s We Are Happy From Tunisia remix captures the significance of Tunisia’s outpouring of videos:

During these last two years, it is this side of Tunisia that we have missed…the face of happy youth that lives in spite of life’s day-to-day struggles. No, Tunisia is not the caricature of Adel Elmi or Bahri Jlassi so often publicized – and manipulated – by certain media. Some images of these youth, so creative in their artistic approaches, are clearly less marketable than the acts and assertions of obscene personalities who in fact represent only themselves.Nawaat

It is true that the way we perceive a country or a culture is so often built around caricatures and stereotypes, or the news items selected for coverage by international media. After September 11, it was not uncommon in the United States, for example, that the term ‘Arab World’ (what does this mean?) was associated with words like ‘Muslim,’ ‘terrorist,’ ‘dictator,’ and images of the hijab as an unquestioned and unexplored symbol of oppression. What Tunisia, among the seventy other participating countries, has contributed to the Happy movement is an offering to the international public of self-proclaimed and self-expressed Tunisian identity as something at once unique and similiar to so many other countries who have shared their tributes to Happy-ness. What each country, each city, each community has to offer in this movement is an independently-crafted testament to one’s existence in the contemporary world during a period in our history marked by widespread political instability, economic crisis, and desperation for change. The collective effect of these hundreds of videos is international recognition and celebration of the diversity that defines our humanity and strengthens our solidarity

…in this world that has become a jungle where the law that reins is that of the strongest and most deceitful, the most ungrateful, self-serving, and individualistic. Now, new generations look to find the happiness, love, and security [that exists] around them.Samia Lamine