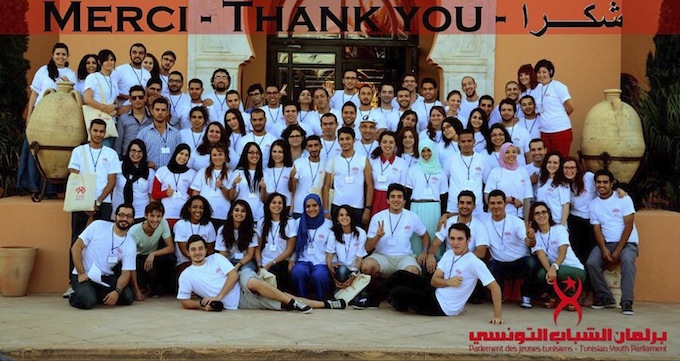 From October 28th to November 1st, at Alhambra Hotel in Hammamet, a nascent Tunisian organization, Tun’Act, held the first Tunisian Youth Parliament to be organized after the Revolution. Participants, notified either via Goete Institute or The British Council or other civil society organizations, were recruited based on online applications. The idea is to have the Tunisian youth act as delegates in a model of the Parliament, as is the case with the European Youth Parliament and other parliamentary youth representations. I had the chance to participate in the event after I got accepted among sixty young Tunisians. This article is my personal evaluation of the event as a whole, beyond the outward show of harmony.

Starting with the participants themselves, the parliament was not representative of the Tunisian Youth as a whole. This could be due to insufficient propaganda for the new organization and the upcoming event and a not-so-democratized means of application (via email). The youth seemed to pertain to a more-or-less well-off class, mostly from the capital or coastal cities, and a genuine (or artificial) francophone background. Politically speaking, though few of them are active members in parties, none of them is partisan neither of Ennahdha nor the Popular Front. If I were to generalize, the representatives of the Tunisian Youth are petty bourgeois liberals coming from the more-or-less privileged regions of Tunisia, with the exception of one single participant from Tataouine, and a handful from inner areas such as Gafsa, Gabes, Jendouba, and Kairouan.

Let us now explore the atmosphere of the training prior to the General Assembly. The main means of communication was French, and at times English to make things fathomable to the Anglophone moderators. Modern Standard Arabic was not to be heard as it was supplanted by the Tunisian dialect or what is linguistically known as “Educated Tunisian Arabic”. The choice of topics was quite adequate and relevant to the post-revolutionary phase in Tunisia.

However, two out of six topics seemed a bit dubious. The first was “religious extremism”, which is a very interesting object of discussion, except that the name of the commission “mysteriously” changed to “religion” in the final booklet of commission articles distributed to the participants at the end of the event. The second controversial topic was “minorities” under which LGBTs were categorized. Well, it turned out that according to universal standards, LGBTs were not deemed a minority! Stirring debate about a taboo issue is a good initiative, but forcing debate about it is a very embarrassing, if not suspicious, thing to do, especially in a society where “other” sexual orientations are practiced de facto_ a society where LGBTs themselves do not speak for themselves.

Finally, I will direct criticism at the choice of guests. At the beginning, we were told to expect Beji Caid Essebsi from Nidaa Tounes and Hamadi Jebali from Ennahdha. On the D-Day, Mohsen Marzouk and Oussama Sghaier came to deliver motivational speeches to the Tunisian Youth enticing them to “earn an active position in the political arena”. I was among the few who noticed the absence of the leftist political force in Tunisian politics – The Popular Front- combining socialists and nationalists. My final question would be: “is this an implicit propaganda, approved by the Tun’Act organization, to promote a bipolar “right-wingish” partisan future for Tunisian politics?” The answer to this jeopardizes the self-proclaimed “neutrality” of the organization, especially when the rumored affinity of its head, Zied Touzani, with Nidaa Tounes is taken into consideration.

This having been noted, the trainings, the coaching, and the people made the experience worthwhile. The interactive spirit of societal work was present; and the initiative itself -regardless of the aforementioned reserves- was creative and is to be encouraged with some rectifications.