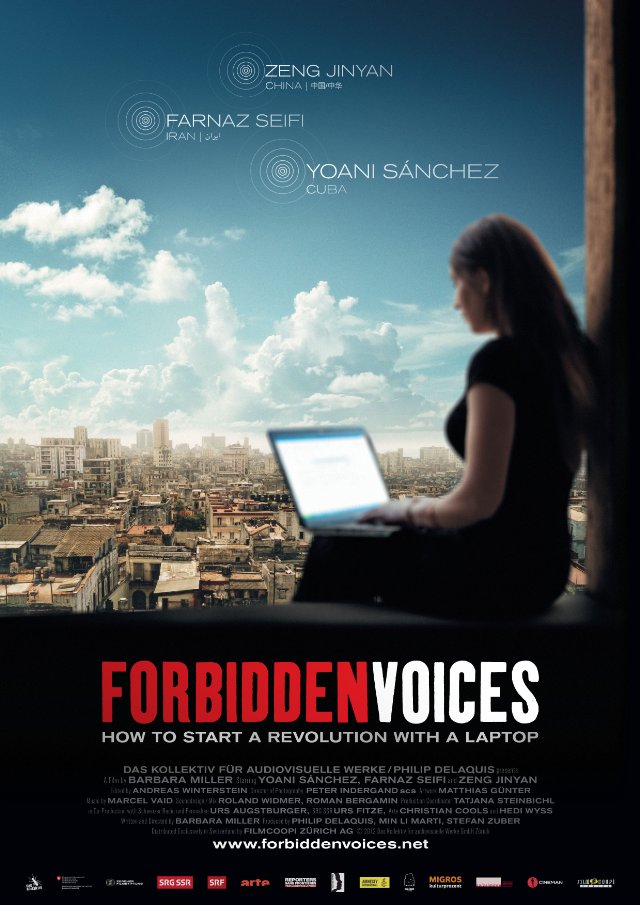 On the 2nd day of the Human Screen International Film Festival in Tunis, “le Mondiale” movie house exhibited yesterday “Forbidden voices”, a film which was released in 2012 and which was winner of the Amnesty International Award and the Swiss Film Festival Award as “Best Documentary”. The film narrates the story of three young and courageous female bloggers, from three different countries, who made a revolution from behind a laptop.

Yoani Sanchez is a Cuban blogger who took in charge the responsibility of voicing out the totalitarianism and dictatorialness of the single-party Cuban regime to the rest of the world. Almost on a daily basis, Yoani publishes in her blog reports and videos that unmask the terrific human rights abuses that the Cuban regime commits against its own people, facing not only the barrier of constant threat and intimidation, but also that of low and monitored internet connection and restricted computer ownership conditions. In a country where all forms of political dissent are forbidden, Yoani devoted the largest room of her blogging effort to speaking on behalf of the Cuban political prisoners who had been exposed to arbitrary imprisonment and to unfair and extrajudicial trials, adding to the acts of torture and the substandard and unhealthy confinement conditions that they were subject to. Yoana visited regularly the wives of the prisoners to console them and encourage them to keep fighting for their husbands’ right to be set free and to enjoy freedom of expression and opinion; she participated in the demonstrations that they organized and for which they became known worldwide as “les Dammes en Blanc”, and she showed big compassion with the political prisoner Orlando Zapata who had gone through 132 days of hunger strike.

Cuban bloggers, including Yoani, have by time become almost the only source of information about the human rights abuses that were committed in Cuba, managing ultimately to reach the hearing of the international opinion and to stimulate an urgent reaction by the concerned international bodies. By the end of 2012, the European Parliament signed condemnations against the Cuban system. Eventually, the 52 political prisoners were released after a Cuban-Spanish agreement to grant them exclusive refuge to Spain.

The second blogger is Iranian. Her name is Farnaz Seifi. Farnaz’s fight for human rights mainly revolved around Iranian women’s right for dignity and equality. “In Iran”, says Farnaz in an ironical tone, “the financial compensation for a man’s genitals maimed in an accident is more expensive than the compensation given to a woman who loses her life in an accident!!” Women in Iran are legally forced to wear the Hijab ; they do not have equal rights to men in areas like marriage, divorce, and inheritance, and they face threats of arrest and persecution in case they dare to defy this injustice.

Yet, this did not forbid Farnaz from participating in peaceful campaigns and demonstrations which were led by Iranian women who decided to protest the injustice inflicted upon them. After getting arrested, beaten, and charged with false and delusive crimes such as blogging and having relations with foreign parties, Farnaz decided to leave Iran seeking refuge in Paris. There, she met other Iranian expatriates with whom she became friends and shared very intimate stories about the acts of violence, persecution and aggression that she was exposed to under the Islamist rule in Iran. From Paris the capital, these rebellious Iranian youth kept following the latest human rights updates in their mother country, the protests against the re-election of president Ahmadi Najed, and the anger waves of the Arab Spring.

In a country where internet coverage is the lowest in the world, and repression of civil liberties and fundamental freedom is the highest, Zeng Jinyan, a female Chinese blogger, dares to create her own blog and to report about human rights violations in China. Knowing about Jinyan’s blogging activities, the Chinese police immediately reacted by imposing on her a house arrest, confiscating her phone and computer and cutting internet connection. Accused of planning an overthrow against the regime, Jinyan was sentenced to three years and a half emprisonment. Today and after that her confinement period is ended, Jinyan is released, but her family remained under surveyed residence.

“Truth terrifies dictatorships”, say the three female bloggers,” It takes courage to uncover the truth, but to take the initiative is always better than to keep silent, the fight continues…”