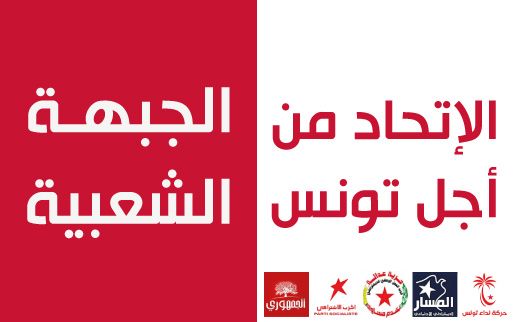 A would-be political alliance between the Popular Front and the Union for Tunisia is looming ahead, emblematized in a significantly-symbolic “encounter” between representatives of each party. The Popular Front, uniting the elusive Left, and the Union for Tunisia, monopolized by a dubious party whose conservative tendencies are economically obvious – a party which is unanimously believed to foster ex-ruling party members and to incarnate what I previously labeled “ideologized opportunism”. I will theoretically deconstruct this potential alliance by simply invalidating all the idealistic and materialistic reasons for such co-operation.

In terms of political domination, the Popular Front is mostly composed of communists and socialists whose favorite slogan is “Down with reactionaries, Destourians and Ikhwanis!”(سحقا سحقا للرجعيّة دساترة و خوانجية) . These watchwords have a methodological portent in defining the ideological enemies of this political body: Destourians are reactionaries for their savage capitalism and oppressive ways that tighten the upper classes’ grip on the impoverished ones; and Ikhwanis are regressivists for basing their whole ideology on the “opium of the people” that benumbs their revolutionary spirit, serves the bourgeoisie, and further indoctrinates the masses into accepting injustice. According to most of the Popular Front members, both sides are equally reactionary and therefore must be shown equal animosity. Why then aligning with one reactionary force against the other? Ethically and pragmatically, it is a most unwise decision.

Some might say that once upon an October 18th, 2005, the same “Left” stood side by side with the other reactionary faction, the Ikhwanis, against the oppressive regime; and that now, the major antagonism is with those “former allies”, since the antagonism is always with those in power. My answer to this is: “People, you are co-operating with the selfsame enemy that the popular will has rejected in a revolution that had taken a heavy toll of lives”! If the current government is not to any party’s liking, there are more ethical ways to topple it, such as… “democracy”, dear “democratic powers”, or another leap in the revolutionary spiral of history, if the people are for another revolution.

If one were to be a die-hard Machiavellian, this de facto alliance is pragmatically… politically-myopic. Becoming the ally of a political body that outweighs you by far is not a wise thing to do. Granted that the party in power will be defeated by a landslide in the upcoming elections, what then? Both allies will not agree neither idealistically nor materialistically, and of course, “the smaller” party will be crushed. Then, the major components of the Popular Front will be in antagonism with the abusive power, their former allies, and will need to make old-new allies, the very “Ikhwanis”. How about that for “Sisyphean politics”?

No deconstructive analysis can prevent what is happening: the revolutionary failure of the government and the anti-revolutionary conversion of the leftist opposition. It is a pity that our political scene has become the crime scene of high treason: anti-revolution. By aligning itself with the Union for Tunisia, the Popular Front is sneering: “Both are reactionary; but one is more reactionary than the other”! Being reactionary is not about being a stickler to religion or to capitalism; it is going back to what the revolution rose against_ it is the same pre-revolutionary scenario being “re-acted”, reproduced, and relived.