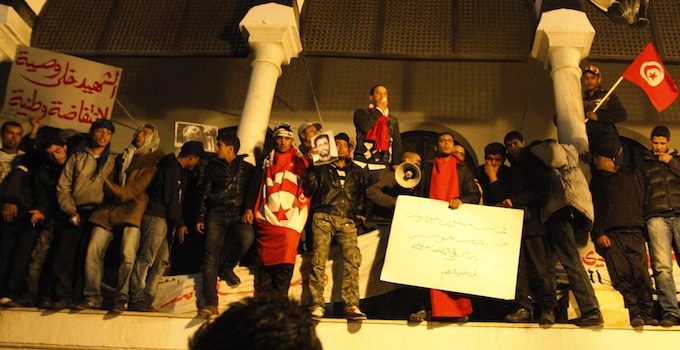 Back in the days of “Big Brother” and the “Thought Police”, the Tunisian people could not discern what was precisely wrong with politics, society, and economy. All the political, social, and economic ills were subsumed under one major ill: that of “oppression”. Now that Oppression, emblematized in Ben Ali’s figure, is toppled, the once unnoticeable problems are surfacing. Activists, militants, politicians and analysts strain themselves to come up with solutions, disregarding the absurdity of solving a problem that they failed to identify in the first place. Let us help them with a brief reading of the socio-politico-economic situation in post-revolution Tunisia.

If we were to be ideologically-correct, we would dissect the political sphere into three tendencies:

Islamists embrace the belief that Islam is a comprehensive spiritual, political, social, and economic project meant to be reinterpreted, adapted to modernity, and implemented for the welfare of all. Leftists are in their turn divided into socialists, nationalists, and liberals (ethically defending human rights and promoting modernity and economically embracing market economy). Although they cannot reach an economic consensus, they agree in terms of values: they antagonize all that is “reactionary”. As for the last category, the one I labeled “ideologized opportunism”, it is a stew of chameleonic values. They preach democracy, modernity and “Tunisianism” to cover their neoliberal economic program, that is if they have one to begin with. What is alarming is not their versatile ideology, it is the partisans themselves; this party serves as a political umbrella for the political machine of the dissolved ruling party.

Let us now try to identify the problem that blights the political sphere. In fact, Islamists and Leftists tend to flirt with this “ideologized opportunism” most of the time covertly. To do so, in my opinion, is both unethical and … stupid. Why is it unethical? A true Islamist cannot build a healthy society and fulfill a lofty goal aided by corruption and opportunism. Likewise, a true Leftist cannot eradicate regressivism by aligning himself/herself with a reactionary tendency, one that means to take us all back to the age of oppression. This ethical judgment is coupled with a tactical assessment; it is stupid to give a hand to those who would cut it off once they reach power -history testifies to the stupidity of such practices. Indeed, “History repeats itself, first as a tragedy, second as a farce”. Why not prove Karl Marx wrong and stop ourselves from becoming the derided objects of a most displeasing farce?

After having identified what is amiss with politics, let us delve into the social realm. Fortunately, social ills are universal and almost clichéd and unfortunately, we suffer from all of them, be it poverty, mendicancy, unemployment, juvenile delinquency, crime, abusive husbands, child labor etc. As you might notice, most of these problems are of a materialistic nature, and logically, materialistic problems call for materialistic measures. Instead, activists and politicians from all political tendencies constantly seek to “idealize” what is materialistic at its core. In response to crime, “stick to your prayer” campaigns are organized. To curb the problem of wife exploitation by their husbands, “mammary activism” is the tool. The answer to unemployment is a “Who assassinated whom?” stand-up protest, or even a “wear your veil properly, sister” event. This “idealization” of “material” social issues can lead nowhere, because it is deliberate, whether conscious or unconscious, deferral of problems. It is “activist procrastination of action” that is synonymous with … inaction.

Of all three spheres, economy remains the most intricate. Between a people that is economically illiterate, politicians that are ideologically inconsistent in terms of economy, and a world order led by savage capitalism, Tunisia seems to be at an economic dead end. Classical conceptions of political economy are obsolete since no system can be purely socialist or capitalistic. One way out of this dilemma might be to adapt similar economic experiences worldwide: to consider liberal reforms, socialist reforms and why not… to theorize for Islamic banking. I say theorize, because the Islamic banking that exists now is only a capitalistic lie. A promising model implementing Islamic banking is Malaysia which witnessed an economic boom thanks to fusing market economy with Islamic finance. Why not give it a try and come up with our own customized economic system? However, a successful political economy does not theorize itself; experts, productive economists, and creative theorists are needed. It is a pity that Tunisian “Milton Friedmans” and “John Keyneses” cannot be born from an educational system that trivializes economy and finance studies.

Regardless of the accuracy of this reading, I deem it the duty of students and the educated class in general to try to identify what is really wrong with Tunisia. Objective assessment needs to overpower affective judgment in order for action to be efficient. I am sure that every responsible patriotic citizen has the ability to remove the affective blindfold to right (or left) the political, social, and economic wrongs.