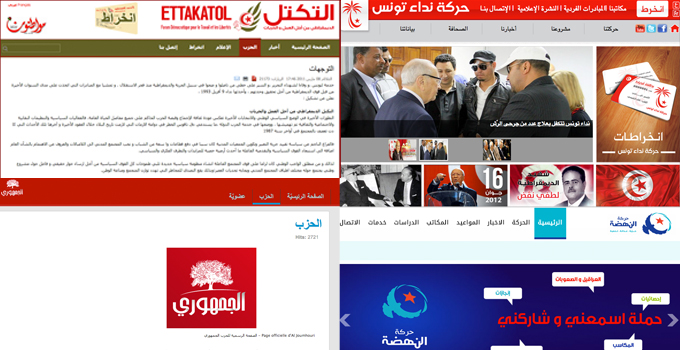 Two years after the Tunisian Revolution, political parties in Tunisia are still living in political prehistory. It is true that the revolution took our rusty politicians by surprise. They were either in jail, or abroad, or in some fancy Tunisian suburb leading a status quo existence. This 56-year political inertia has taken its toll on our post-revolutionary political life. All of a sudden, we have three major political entities vying with each other in primitive – or let us say “reactionary”, since the word is trendy- politics. The cyber activity of our political parties would testify to the “metaphysicality” and immaturity of Tunisian politics. To reinforce my argument, I would simply reiterate, without specifying the source, some of our major parties’ statements on their official websites.

Let us pose as average Tunisian citizens with enough free time and curiosity to check our political parties’ websites. Seriously, try and log on to the official websites of the major political parties in Tunisia. From the definition part, they would refrain from classifying their political tendency. In Tunisia, the political atmosphere is laden with suspense and creativity: we have no officially self-proclaimed conservatives, no officially self-acknowledged communists or socialists, no officially self-declared liberals… Our dear politicians are either ashamed or unaware of their political beliefs; either ways, the situation is bathetically pathetic. In acknowledged democracies like the US, UK, and France (to please our francophone audience), the name of the party is all-inclusive: history, political philosophy, political economy. The Conservative Party in Britain is simply… conservative! It is not “a movement based on the [British] reformative thought, the universal human legacy, and the values of freedom and social justice… believing in the State, the Tunisian flag, the National Anthem, democracy…”. Prolixity in politics is the same as in writing exercises: a penalized defect. Without bypassing the definition section, the primitive nature of our political parties manifests itself without reserves. It turns out that with Tunisian political parties, it is legitimate to judge the book by its cover.

The only problem is that there is no book to judge! Let us click the program section – if such one exists of course. Politically speaking, you would find all derivatives of the words “democracy” and “liberty” – a political agenda that is as elusive and metaphysical as the words “democracy” and “liberty” themselves! Economically speaking, between the “the national industry”, “the efficient economic regional interaction” and “the creation of a national pole for Islamic banking”, one remains lost. A national industry without a national capital; economic interaction without a healthy economy; and Islamic banking without an Islamic political economy – an economic agenda as elusive and metaphysical as “social justice” itself! Socially speaking, some aim at “restoring the hopes of the revolution through employment and education” while others promise social “progress” – a social agenda as elusive and metaphysical as the word “progress” itself! I keep iterating my comment because I have no other grievances; I only object to the “metaphysicality” of our Tunisian politics. The Tunisian people, at least the conscious ones, are not interested in the “what?”; they care only about the “how?”: How will you achieve what you promised?

Since cynicism is not the best critique of metaphysics, I am to give substantial pieces of advice to our political parties:

Without these few basic points, no citizen would know for what he/she is voting, nor would any political analyst venture to work on the Tunisian political arena. Yes, I call it arena on purpose, because I mean the primitive “sand-strewn place of combat”[1]. In Tunisian politics, there is the polis (=city), there is the politēs (= citizen), but there is nothing politic (=prudent, wise, based on good judgment)[2].