Skip to content
The article was originally written in Arabic and translated into English by Lotfi Hermi. 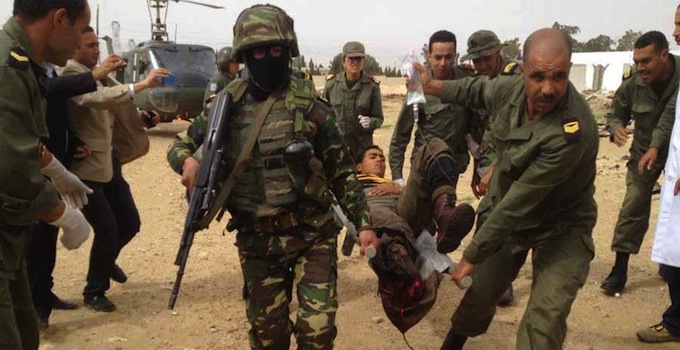 Seasoned independent Tunisian journalist and human rights activist Mokhtar Khalfaoui writes on the tragedy unfolding at the Kasserine Pass, and the double speak of Islamists.

I am following the events unveiling at the Chaambi Mount with much consternation, and with the words of Mr. Rached Ghannouchi talking to leaders of the Salafist puritan movement in the infamous video from a few months ago [which he said was doctored and taken out of context]. The leader of the Ennahda ruling party was then admonishing his more puritan brethren and enlightening them about the angles they missed from what he termed Fiqh al-Waqi [understanding the realities], and about observing the circumstances and necessities required for theocracy to dominate the lives of Tunisians, couched in the language of “empowerment” —religious empowerment that it. Sidi Sheikh’s words still have a special ring to the ear. He once sternly warned “the army is not guaranteed, and the security forces are not guaranteed…”

Then there was Kasserine Pass, and the events of Mount Chaambi came to pass —as foretold before by the observers, like many such violent incidents. And we discovered—like many—that the “radicalized” youth—as the [Islamist] government likes to carefully identify them—decided to go jugular and enter in a direct clash with the Army and Security Forces to turn the tables to its favor. Then, there was the brutal slaughter of a security cadre in Jebel Jeloud on the southern industrial outskirts of Metropolitan Tunis whose murder cannot be isolated from the imported Improved Explosive Device technology which led to the amputation of the limbs of soldiers and security forces, and their blinding in the forests of Mount Chaambi.

We know from the public confessions of Sidi Sheikh that this “radicalized youth” reminded him of his own youth, when he was avidly reading the books of Qutb, Maududi, Ben Nabi, and others. This perhaps explains his kind and gentle demeanor, a character that is twined with absolute religious zeal that rekindles the youthful days, and in which he finds reasons to be kind to the rebellious ones.

On the ground, in the land of the heathens, we find his disciples hard at work preparing the time of empowerment for the Theocratic State: Pulpits and mosques from which ex-communication speeches are voiced, puritanical condemnations of centuries’ local religious practices are shunned, and calls for outright murder of opponents are readily delivered. The dreams of the “strangers” —those who did not find a footing in what the modern world has to offer—impair their vision of reality. Dreams of the “Islamic State” mar the imagination of the crazed—a true anarchy of thought, and the ultimate state of Chaos [as understood by the Greeks].

Then there is the “Televangelist Cosmos” a reordering the Tunisian universe: Hordes [1] of puritanical preachers are invading the country—in singles, and in droves—to find the two sheikhs awaiting them, open arms. By the two sheikhs, I mean the key aids to Mr. Ghannouchi, and leaders of his own party, Habib Ellouze and Sadok Chourou. Of course, we have to remember Sidi Sheikh’s theoretical grounding in the social theory which he baptized the “Principle of Action-Reaction” [Tadafu] —a true ‘stampede’ by Middle Eastern televangelists who are in the process of force-feeding the heathens a culture strange to Tunisian society—the culture of what the people of the desert call the “heem camels”—as when in severe thirst, camels violently push and shove at the water point.

The Culture of Terrorism

Now, we come to this “culture of terrorism”. It is a primal instinct born to the behemoth innate nature of mankind. Tunisian culture is not good enough for the beasts—[and to paraphrase Francis Bacon]—if the mountain will not come to the beasts, the beasts must go to the mountain. This is necessary background to understand the Chaambi Mount fight. The only way for the beasts to beat culture out of the heathens of the North African state is to hide in the caves of the mountain and “Fight the Taghut that be” [2] — that favorite mantra of Islamists.

Fighting the Taghut tyrant means to smite the necks of the infidels and their helpers—chiefly represented in the Army and Security Forces. We’re not good enough for them being the heathens we are, they must first kill us with words, then rob us of our humanity. In this absurd understanding of human relations, duty and religious creed meet to destroy the “falsehood of men”—in the niches of mosques, and in the haciendas of Islamic houses of worship. Those who sow thorns here must reap wounds there.

The government must own its mistakes and recognize it failed to deal with terrorism by nipping it in the bud. Its inaction and its collusion with extremists groups were evident from the beginning. We should recall the abundance of news reports which talked for months of training camps throughout the country, and spoke of stockpiling of weapons. Then Interior Minister Ali Larayedh declared the news reports were an exaggeration—scarecrows by political foes we’re told.

Instead of firmly dealing with these serious matters from their inception, the ruling Ennahda party opted to cater to its hardliner wing and play the ostrich by dipping its neck into the sand. This policy has led to incidents of violence, political assassinations, and is today leading to blind terrorism that killed or maimed patriotic sons of Tunisia from among the National Guard and Army. Tomorrow the victims will be the regular people.

In the thick of the Chaambi Mount events, we received four messages which can provide raw material to understand part of what’s going on. The first message came from “Sheikh” Habib Elouze who called on Tunisian citizens who refuse “Shariah” Holy Law to leave the country. The second message came from his brother Sadok Chouru who called on the government to soften its stand with the beasts of the mountain and enter into a dialogue with armed extremist groups. The third message came from Mr. Ghannouchi himself to his militant extremist “sons” in which he declared “fighting the Muslim believer [from the Army or Security Forces] is illicit under religious law for it leads one to lose his faith under the precepts of Islam”. Now, this is clearly a correction of his earlier declarations in the infamous video from a few months ago. This time around “the Tunisian Army is Muslim” and so is the case of the Tunisian police. Jihadists should not fight against them. The fourth message came from a number of elders of the Salafist puritanical horde calling for state institutions, media and intellectuals to stop harassing their movement and not fault them. They also called for the application of Shariah law, demanded an official state apology to the Salafists and the immediate and unconditional release of their followers. Last but not least, they called for financial compensation—what they termed “blood money”—to the families of those killed in previous incidents, such as the U.S. Embassy attacks, the events of Daouar Hicher, and other violent clashes with security forces.

The tragedy unfolding before us is no catharsis. It is a true theater of the absurd, and a bad joke wrapped in a tragedy.

-2- “Taghut” is Modern Arabic for “Tyrant”. Professor Youssef Seddik, a Sorbonne anthropologist who returned home after the Tunisian revolution, and has openly called for a new reading of the Qur’an, recently argued in a heated debate with Wahabi propagandist Bechir Ben Hassen that “Taghut”— always paired as “Jitb and Taghut” —is the ancient Egyptian deity Thoth, also identified as Tehuti, or Djehuty.