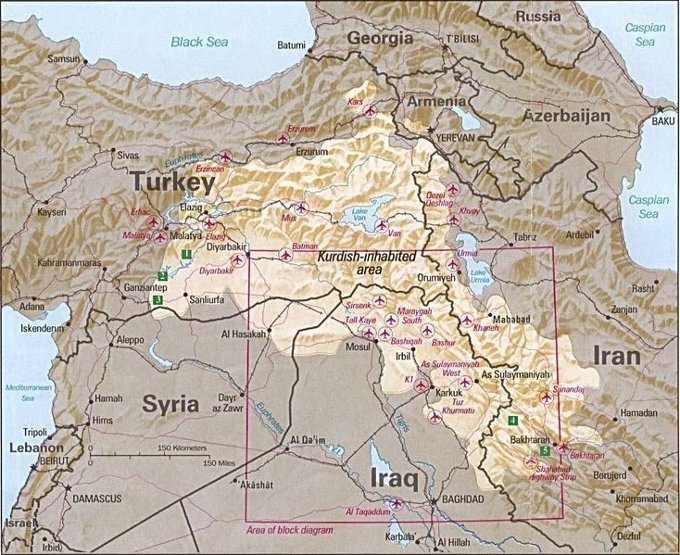 By Dr. Ayoub Massoudi, transated from Arabic by Ibrahim Kazerooni and Rob Prince

From all appearances, nothing short of the cornerstone for a regional Middle East civil war was laid on Imrali, a Turkish island in the southern region of the Sea of Marmara. Those who do not understand how to read history always fall behind. And those who are not acquainted with Abdullah Ocalan, the Kurdish leader and the message he sent out to his people on March 21, are not in a position to comprehend the depth and the enormity of the threat directed toward the Arab world and Middle East in general that this communication represents.

In his letter, Ocalan calls on Kurdish fighters to lay down their weapons and to unite with their Turkish countrymen. He reminds them of the battle of Gallipoli where Turks and the Kurds fought side by side, emphasizing to his followers that the battle ahead required a similar level of unity. Citing that enormity of the current challenge requires the unity of the Kurds and the Turks, with this letter, Ocalan brought to a close the thirty years of Kurdish armed struggle for independence waged against Turkish central government.

With a throwback on history that Kurds would well understand, the letter speaks of historical `Anatolia’ and `Mesopotamia’ (known as the land between the two rivers). Such references are critical for an in depth understanding of possible future scenarios, coordinated efforts between Washington/Paris/Ankara and Doha.

The timing of Obama’s visit to Israel seems to coordinate nicely with something else going on in the region: U.S. efforts to encourage Turkish – Kurdish reconciliation. These efforts coincide with Obama’s visit to the Zionist Entity, to Mahmoud Abbas in Ramallah and to Jordan, coming in the aftermath of a number of recent events in the region, including

In this regard it is notable that a few days ago the Turkish government released a number of Kurdish prisoners, encouraging them either to join the so-called Syrian resistance under the leadership of the Democratic Union Party, a Syrian Kurdish party or to be sent, if needed, to fight Iran in the attempt to create a Kurdish state.

Somewhat initially shaken by the emergence of the Arab Spring, the United States is in the process of recovering its political balance. Freeing itself from possible regional squabbles between its allies that might limit its success, the US has thus succeeded in resolving outstanding issues between its regional partners in preparation for the ultimate battle that it intends to fight to regain its hegemony over the region.

As for the American ambassador’s visit to the southern Tunisian border, an action itself against Tunisian sovereignty and diplomatic protocol, the probable purpose was to make sure that no more Tunisian mercenaries are sent out to both Syria and Libya to support NATO’s efforts in those countries. In its war with the Zionist regime, the Turkish government used the Palestinian card in a strategic manner to benefit itself politically and economically. Now that the chips are down with the U.S. wanting to coordinate the policies of its two key two regional security allies, the veils are removed and the Turkish regime’s truer face has become clear.

It is time to ask what was the purpose of Obama’s visit to the Middle East ?

It has become clear that the primary objective of Obama’s Middle East visit was nothing more than rewarding regional puppets that co-opted the Arab resistance, Iraq and Syria for few hundreds millions dollars. It started with the King of Jordan who, for $200 million, turned his country into an open American base to export weapons and train Syria-bound mercenaries.

Turkey will be well rewarded for its participation. In exchange for the establishment of federal Turkish-Kurdish relationship that will include Arab lands that have Kurdish majority in Syria, Iraq and North West Iran, Turkey will gain considerable influence, if not control of the the oil in northern Iraq in addition to what they will get from Iran and Syria.

I want to remind our readers that such a solution to the Kurdish problem was the brain child of Togut Ozal, Turkey’s 8th president (Turkey’s president 1983-1989). This is the deal that Ocalan is willing to make with Turkey, both to save his own skin and to achieve some Turkish-Kurdish reconciliation.

Resolution of the Kurdish issue in a peaceful and democratic manner will probably also allow Turkey to improve its standing in the region, and possibly open the door for Turkey to become a member of European Club. This conflict resolution has been in the making over a long time period. It would open the door for Europe and specifically NATO through Turkey to the Middle East. The deal which appears to be in the making looks something like this: in exchange for services rendered to Turkey and NATO a future Kurdish government would have a free hand in controlling the oil in Iraq and Iran and the gas in Syria.

Nor is this a new venture for Turkey. Those with a sense of history are aware that the Turkish government has long sought to control the Arab region through creation of dysfunctional and weak local powers that become subservient to them.

What about the Arabs, well, once again, the Arabs will come out of this scenario humiliated and marginalized after betraying Arabs Ideals and selling our homeland for few American dollars. As for the Tunisian government that send our ‘brave mercenaries’ to Quatarael to fight in Syria, the government understands full well that the intended result is to further divide the Arab land into smaller morsels. The Tunisian government is also aware that these mercenaries would to be trained at an American base in Qatar by the Zionist under Azerbaijani flag. In fact, the present Tunisian government has not even attempted to deny such a claim.

Turkey is not to blame for its plans to secure its own interests, even if it be at the expense of the Arab world. Nor do our Kurdish brothers, unable to find their place in nondemocratic dysfunctional Arab countries unable to integrate its minorities on the basis of civil and democratic values. No, the full responsibility rests on the deceitful traitors that we, the Arabs have, s leaders in the Arab world. It is they that opened their borders from the Atlantic to the Gulf , who in Tunisia have exported our youth, a youth that has little hope for their own future given the prevailing poverty in our country. Tunisia’s youth are being used as pawns to serve the interests of others, especially in the Turkish project intended to divide Muslim and Arab lands. Turkey will get the membership of the European club and Arabs will be left divided marginalized and out the picture.

Dr. Ayoub Massoudi: having studied in Tunisia and France, he obtained a PhD degree in information security and Telecommunications engineering. After supporting the Tunisian Revolution and participating in all protests in Paris (December 2010 – january 2011), he joined the Congres Pour la Republique Party (CRP -current presidential party) as the information and communication manager. In June 2011, he was elected Secretary General of the party office in France. Massoudi was a key contributor to the success of the CPR in the October, 2011 elections. In December 2011, he joined the president cabinet as top media advisor before resigning on June, 28 in protest against the extradition of former Libyan Foreign Minister to Tripoli. For his public criticisms of Ennahdha (the Islamic Party in power in Tunis) and some military leaders, he was indicted and is facing military trial in Tunis.