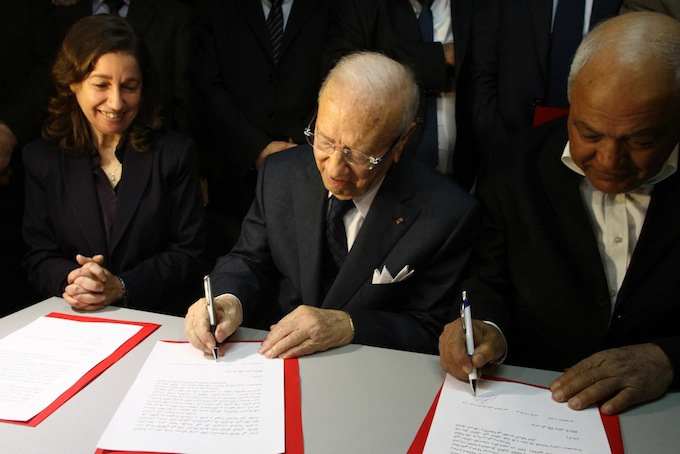 The week promised to shake up considerably the political landscape in Tunisia. Contrary to the expectations of most observers, the long awaited cabinet reshuffle announcement was delayed due to the lack of consensus among the leading troika as announced Prime Minister Hamadi Jebali on Saturday. The new-born troika of the opposition (Nidaa Tounes, Republican Party al Massar) went almost unnoticed since the Popular Front (a unified political alliance of left-wing parties) seems to be still reluctant to join the new political and electoral front. The defection of one of the “founding fathers” of the newly –formed democratic coalition raises nonetheless concern about the future of the front. The Regional Conference on Police Reform held on January 25-26 shed light on the issue of police politicization two years after “the fall of the police state” in Tunisia.

The desire of Nidaa Tounes, el Massar and Republican to regroup opposition forces had eventually become a reality after intensive talks among the opposition political leaders seeking a counterbalance to the Islamic-dominated government. Asked whether such an alliance would include the left -leaning elements of the Popular Front (Al-jabha al-shaabya), Maya Jribi disclosed the existence of ongoing negotiations with the other democratic political forces to join the new alliance. Chokri Belaid, one of the leaders of the Popular Front talked about the absence of a clear agenda which may discourage the Popular front from adhering to the new initiative.

Belaid argued that the willingness of the democratic coalition leaders to enter into a power-sharing agreement with Ennahda makes him sceptical of the stance of the former (supposedly opposition voices) towards the ruling party. Meanwhile women of the Movement of Patriotic Democrats (Al Watad) held their constitutive congress on 26th and 27th January 2013; an indication that the far left has embarked on a deep process of transformation.

Tunisian opposition party Nidaa Tounes marked its first anniversary on January 27th with a massive rally, during which a meaningful social and economic program was unveiled almost a year after the formation of the call of Tunisia.

Divides inside the newly formed Democratic Coalition had emerged soon after its founding. While the inaugural congress of the Coalition will be held tentatively at the end of March 2013, deep disagreements became visible within the coalition as two of its founding members Mohamed Hamdi and Mohamed Goumani argued over entering the government in the upcoming cabinet reshuffle. Despite the party’ refusal to join the next government, Goumani accepted a ministerial post which led to his discharge from the party.

The makeover of the government failed to take place after lengthy consultations which fuelled endless rumours and jokes on social media. The divisions among the political actors indicate that consensus is hardly possible and cabinet reshuffle is far from “imminent”. Nonetheless, Prime Minister Hamadi Jebali considered submitting a list of government members to the Constituent Assembly for their approval, after all the Constituent Assembly is the sole legitimate structure democratically elected on last October elections in Tunisia. Talks over cabinet reshuffle seem to have stalled due to the refusal of Ennahda to give up key ministries -mainly Justice and Foreign Affairs- a fact which drew sharp criticism from opposition political actors and observers.

Stalled police reform two years after the revolution still raises concerns over the future of democracy in Tunisia. A regional conference was held on January 25-26 on the theme of “Post-Revolution Police Reform: Current State and Challenges,” and brought together experts on police reform, politicians, members of the government and non-governmental organizations representatives.

A panel of distinguished experts (The former interior minister of Georgia Ekaterine zguladze, president of the Open Society Foundation Christopher Stone and Tunisian Secretary of State in charge of police reform Said Mechichi) emphasised that police reform is an indispensable step to cut ties with the authoritarian past and to build a robust democracy in Tunisia. Wael Garrafi, one of the victims of police brutality (living with amputation following police gunshot on January 9th 2011) underscored the need to create fast and profound changes in the police organization but above all to bring to justice those responsible for inflicting torture and other human rights violations inside the police institutions.

Inside the National Constituent Assembly (NCA)

The Constituent assembly continued discussions on the chapter of rights and freedoms of the draft constitution, an opportunity to bring to the table of dialogue opinions of different backgrounds within the Tunisian society.

The conflicting views over rights and liberties made it hard to reach a consensus on Friday, thus the session of January 21st continued over the same topic of debate with a 108 constituent assembly members present. Discussions revolved mainly over the identity and the role of religion in the society, themes already touched upon before. Criminalizing normalization with Israel and penalizing blasphemy were key proposals by the Ennahda deputies. Bechir Chammem, one of Ennahda members, went on to suggest applying Islamic principles in art works. The debate over religion seems to be far from over, Halima Guenni (Ennahda) called for giving the highest priority for the values of Islam, rejecting systematically any constitutional provision which would jeopardize such identity. In the same vein, Abdelaziz Chaabane (Ennahda) called into question the Western model of democracy in reference to homosexuality, adultery and adoption.

Samia Toumi’s (Ennahda) intervention came as a surprise to many MPs since she advocated for the abolition of death penalty and called for the enshrinement of environmental rights in the constitution, as well as the protection of the rights of women who wear headscarves.

Shortly after Habib Khedr, a member of the Islamist party Ennahda, announced that Tunisia will likely opt for a mixed political system the following interventions asked for a constitution based on sharia law. The conservative fever manifested already on a number of occasions before inside the National Constituent Assembly came to the fore once again.