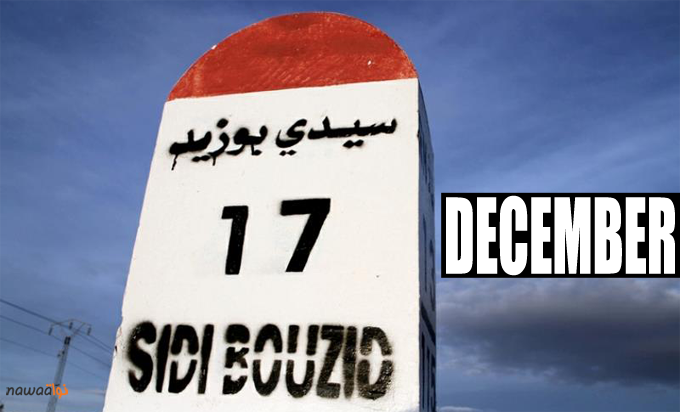 Ironically he was a “nobody”, one of the powerless poor who would operate a small fruit-cart in the impoverished town of Sidi Bouzid (That sounds like the seaside town fascinating Sidi Bou Said); the truth is that Sidi Bouzid (about 200 miles south of Tunis) is a deprived town, home to the most disadvantaged yet the most brave citizens of Tunisia, struggling with a low socioeconomic status to survive their miserable reality. Mohamed Bouazizi’s desperate act of self-immolation had surprisingly toppled the long-entrenched regime of the one man who ruled Tunisia for almost 23 years. Tunisia became the progenitor of the Arab world upheavals (Egypt, Libya, Yemen, Morocco, Syria and Bahrain …), inspired massive rebellions across Europe (London, Madrid and Athens..) and resonated in the Western Hemisphere through the Occupy Wall Street movement.

Overwhelmed by the fervor of revolutionary belief, the once subjugated Tunisians believed that their country will never be the same. Did they expect “too much”? Jobs, Freedom and National Dignity. Two years later, people with empty pockets still pour to the streets, reminding the leaders they elected about the fundamental goals of the revolution, the quest for dignity and prosperity is often hampered by promises that have not yet been fulfilled almost 14 month after the October elections. Police brutality against nonviolent protestors is still pervasive under the leadership of the Troika government (leaders who themselves been victims of police abuses in the past). Not so long ago, the legitimate government deemed the legitimate demands of the people of the city of Siliana (more investment and development) illegitimate. The answer was violence, tear gas and Birdshots to silence the voices demanding more economic rights. Besides the 200 injured victims of the violence, 20 protestors might lose sight permanently from the pellet bullets fired against them, under the slogan “for a clear vision” (adopted by the Congress for the Republic (CPR) one the the ruling tripartite coalition known as the Troika.

Upon arriving to Sidi Bouzid, the overall picture has become rosy indeed. Unemployment and poverty seem to have been tackled and the government has assumed it is time to celebrate. On Monday Tunisia interim president Moncef Marzouki, Mustapha Ben Jaafar President of Tunisia’s Constituent Assembly and High ranking officials headed to the cradle of the Tunisian uprising, Sidi Bouzid to celebrate the two-year anniversary of the revolution- One of the pivotal moments in the history of Tunisia. They did not come empty handed, they brought with them more promises, more dreams and above all an eloquent victimhood rhetoric. “But we are dealing with an aftermath of 50 years of dictatorship that we cannot fix in 12 months only.” Said Marzouki to the crowd. Protesters have thrown tomatoes and stones at Tunisia’s President Moncef Marzouki and chanted “the people want the fall of the regime” in the square of the celebrations. In an echo to the protests of December 17th 2010 the voices of anger were loud and clear “Dégage” or get out, after all one of the aspirations of the revolution was jobs, but jobs remain to be promises, projects on paper and unreachable dreams.

Meanwhile, in front of the National Constituent Assembly headquarters and in a less festive mood, the families of the martyrs and wounded of the revolution staged a sit-in to call on the government to bring justice and provide decent medical care for the wounded who were in the front lines during the uprising protesting against the injustices of the authoritarian regime of Ben Ali. It is unacceptable that those freedom fighters remain ignored two years after the revolution. The failure of the government to provide a proper treatment to the victims of the revolution is a disgrace for the Ennahda-led government claiming to be committed to democratic reform. At the heart of the plight of the more than 700 wounded and the families of the 300 martyrs is the fact that they were used for political purposes during the elections campaign. Today, those in power are busy sharing the pie, on the other hand the losers aspire to a piece of the pie and in the midst of this very struggle for power the cause of the wounded is lost.

Two years later, people still remember so vividly why they toppled Ben Ali’s government. They believed that they would be entitled to a promising future. They genuinely believed that igniting a revolution in the ruthless police state of Ben Ali is possible. They talked about change which breaks to the core the old order and gradually brings to the fore more welfare and justice for all. The most hard-hit section of the Tunisian population, the poor, will not tolerate further empty promises and failures to meet their demands. The members of the legitimate government must fathom the fact that a revolutionary process of democratization requires revolutionary decisions and above all actions not parades and celebrations.