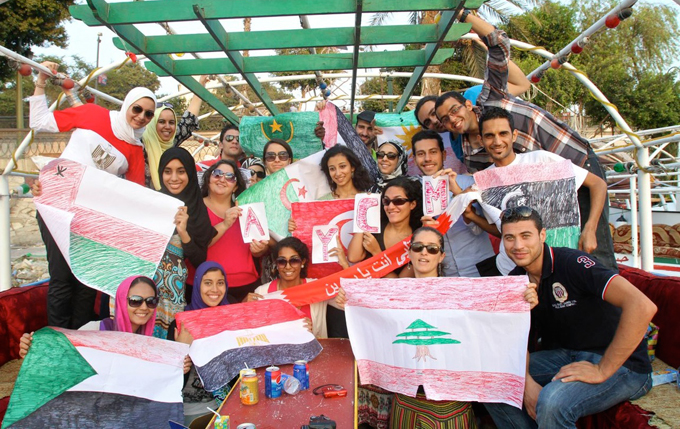 An Arab Youth Climate Movement calling for a more sustainable future in the region will launch simultaneously across more than a dozen countries in the Middle East and North Africa on 10 November 2012, ahead of the upcoming 18th Conference of the Parties (COP 18) under the United Nations Framework Convention on Climate Change (UNFCCC) in Doha. With Qatar being the first Middle East country to host a major UN climate change conference, the region’s youth is turning to the Gulf State as a potential leader to help secure a successful COP18 outcome and change the region’s current image as ‘obstructionist’ in the climate negotiations.

The youth climate movement – the first of its kind in the Arab world – unites hundreds of grass roots activists from Middle East and North African countries such as Qatar, Mauritania, Morocco, Jordan, Libya, Tunisia, United Arab Emirates, Palestine, Lebanon, Iraq, Algeria, Sudan, Oman, Egypt and Bahrain, and was established with the backing of campaigners from regional and international organisations like IndyACT, 350.org, the Climate Action Network and the global TckTckTck campaign. On 10 November, activists will engage in activities that range from seminars and film screenings to marches and parades in cities across the region.

“Climate change is one of the most pressing environmental problems facing the Middle East and North Africa today. The launch of the Arab Youth Climate Movement and the Day of Action on 10 November demonstrate that we – the Arab youth of today – are united in our call on governments to pledge emission cuts and take a more sustainable, less oil dependent stance in the UN climate talks in Doha, especially host country Qatar. The upcoming COP18 meeting needs to address the reality of current challenges faced in the region due to climate change, but also pave the way for a more sustainable future for all”, said Arab Youth Movement Regional Coordinator Mostafa Fouad.

The Arab Youth Climate Movement was initiated by the youth-based Arab NGO IndyACT, which organized a regional workshop in Egypt earlier this year, supported by 350.org, the global TckTckTck campaign, Climate Action Network, the DEMENA Climate Ambassadors and the Heinrich Böll Foundation. 500 people applied to take part, and 20 inspiring Arab youth activists were selected to be national coordinators and came together to plan, share and build a powerful regional and sustainable climate movement.

“The youth of the Arab world played a major role in the uprisings and revolutions which started in 2010. Today, a different type of revolution is slowly brewing – as Arab youths are uniting to take a stance on climate change and to call on their countries to improve their ecological footprint and cut emissions”, said Anna Collins, International Youth Coordinator at the global TckTckTck campaign.

The upcoming COP18 – to be held in Doha from 26 November to 7 December 2012 – is a golden opportunity for Qatar to further concretise its commitments and put forward an ambitious pledge to cut emissions. As the host country of the negotiations, Qatar can play a crucial role in ensuring that the outcome of COP18 results in bolstering efforts to raise climate finance and climate action, whilst helping to safeguard a future for the Kyoto Protocol. Qatar can also lead the negotiators gathering in Doha towards reaching an agreement on a process which will help close the global ambition gap between current emission reduction pledges and what is required to avoid catastrophic impacts according to climate science.

The new Arab Youth Climate Movement joins other youth organizations which have formed coalitions regionally and nationally over recent years – in order to take positive action on climate change and come together to create a more sustainable, prosperous, meaningful, just, and fair world. These youth networks will also meet and collaborate on the ground at COP18 in Doha.

For all media queries and information on activities taking place in the different countries (including local spokespeople) or for more information about the Arab Youth Climate Movement, please contact: Mona Samari, mona@communicationsinc.co.uk or call + 44 (0) 7515 828 939

TckTckTck is the public campaign of the Global Campaign for Climate Action (GCCA), an unprecedented alliance of more than 375 organizations from around the world. The GCCA works to mobilize civil society and galvanize public support to ensure a safe climate future for people and nature, to promote the low-carbon transition of our economies, and to accelerate the adaptation efforts in communities already affected by climate change.

On 10 November, the global TckTckTck campaign is supporting the Day of Action organized by the local groups gathered in the Arab Youth Climate Movement.