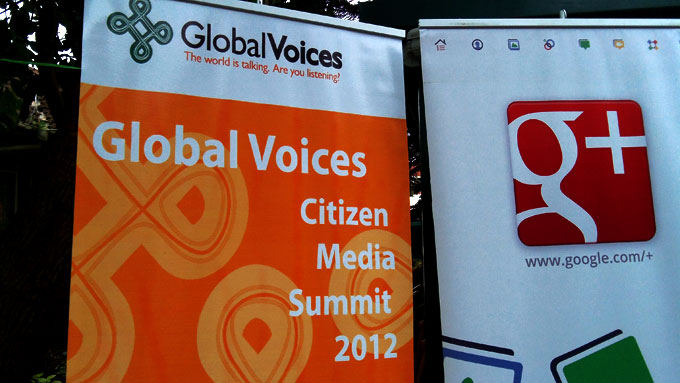 On July, 2 more than 300 bloggers, netizens, and academics flocked to Westlands in Nairobi, Kenya to take part at the 2012 Global Voices Citizen Media Summit. After welcoming guests, Ethan Zuckerman, co-founder of Global Voices Online gave some historical background, and talke about the first Global Voices Summit. He, and Rebecca Mackinnon hosted a gathering of “fourty early bloggers” from around the world, at Harvard University. They all had two things in common. They wanted a “place for free and open speech”, and to know what was going in on in “the four corners of the world”, said Ethan.

Mr. Zuckerman then moderated the opening panel on the Global Rise of Citizen Media. Mong Palatino, an activist and an MP from the Philippines talked about how social networks are used in South East Asia. For instance, he mentioned a citizen media initiative in Cambodia aimed at mapping lad evictions, and the #thaiflood twitter hash tag, through which netizens monitor floods, and complain about the government’s inefficiency in handling natural disasters. Poor IT infrastructure in South East Asia, did not stop the increasing use of social media. For him, Internet access high cost is the biggest censor.

Matisse Bustos Hawkes, the communication manager of Witness, a human rights organization, highlighted the importance of social networks in the battle for human rights. Witness documents human rights violations using videos. Matisse talked about the Human Rights Channel, a project her organization launched in collaboration with Storyful. The channel curates “the most powerful human rights content “.

Amira Al Hussaini, the Global Voices MENA region editor went back to the day Zeine El-Abidin Ben Ali left Tunisia, and fled to Saudi Arabia. “I broke down…that moment is entrenched in my memory”, she said. Amira also highlighted the repercussions of citizen journalism on those on the ground. She explianed how governments can easily identify political dissidents via social networks.

“But it’s a matter of choice”, she said “even if it is not through social Networks, governments can still identify people”.

Faisal Kapadia, a Pakestani blogger, and journalist informed the audience about Internet use in his country. In Pakistan, there are 6 million Facebookers, and 3 million Twitter users. Kapadia, and his fellow activists use social media to help coordinate disaster relief.

Following the opening panel, Global Voices Summit partcipants had the chance to choose among a variety of sessions, taking place at the same time and sheding light on Internet and social media issues. Here are all the sessions with links.

How do small African nations grab the world’s attention?

In the afternoon, there were also several simultaneous sessions. As someone concerned about  Facebook’s privacy policies, I joined the session “How Facebook spies on you”.

Max Schrems, an Austrian lawyer from europe-v-facebook.org , gave a presentation about the legal battle his organization is undergoing against Facebook, to push the social network giant to respect EU priacy laws.  Schrems said that according to European data protection law, every person outside the US and Canada has the right to to get a copy of all personal data any company, namely Facebook, holds about him.

Max obtained his own copy, and he shared with the audience some striking examples about how Facebook tracks and stores information about its users. For instance, in his copy Schrems found out that Facebook knew his last location even though he does not use any GPRS device. Schrems who deleted messages about his voting choice found out that they were retained by Facebook.

The panel brought together Ramzi Jaber, a Palestinian activist who has recently lanched onlinecensorship.org , which crowdsource censorship cases enacted by social networking company,  Max Schrems from  europe-v-facebook.org, and Bob Boorstin, director of Corporate and Policy Communications for Google. A summary of the panel is available on the summit’s website.

The Moroccan blog Mamfaknich, and the Hungarian free speech organization Atlatszo.hu, were both awarded the Breaking Borders Awards in recognition of their efforts to promote freedom of expresstion. The winners get $10,000 each.

Follow the hash tag #GV2012 for updates from Nairobi, and the summit’s website, or you can watch  the summit live.