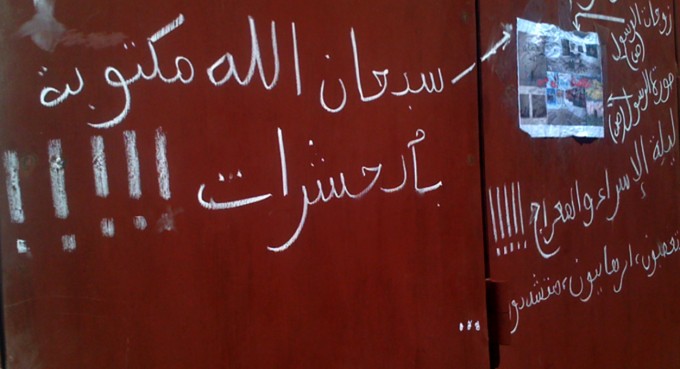 “Criminals, drug traffickers, and Salafist extremists are the ones behind the unrest,” Ali Laraayedh, the Tunisian Minister of the Interior, told the Constituent Assembly on Tuesday. The minister was invited to speak to the assembly and answer its questions regarding the latest wave of unrest in the Tunis suburbs and several cities throughout the country.

Since Monday night, confrontations between security forces and what appear to be young Salafists and delinquents of various backgrounds have started taking the whole city by storm. In Tunis, young men hurled rocks, molotov cocktails, and petrol bombs at police officers. A whopping total of 730 individuals were admitted into public hospitals for urgent care. Most were wounded due to tear gas and rubber bullets shot by security forces, and in Sousse, a young 22 year-old was killed with a rubber bullet stuck in his skull. The Ministry of the Interior has yet to prepare a final and official count of those wounded and their identities.

When Ali Laraayedh came to the assembly, one expected a solid plan that outlines how the ministry plans on handling the situation – which, whether we like admitting it or not, is a serious security slip. It’s important to remember that while such a flagrant security situation does not call for the use of repressive means, it in fact necessitates the assertion of order and fair due process when the laws are broken.

Instead, Laraayedh spent the few minutes he had to give a speech to the assembly pinning the blame on mainly three parties: Salafists, drug and alcohol trafficking circles, and “provocative forces,” – namely, al-Zawahiri, the leader of al-Qaeda who called for a ‘holy war’ to be waged in Tunis, Jalel Brick, a Tunisian talking head whose sole mission is to post videos on Facebook insulting everyone, and the Abdeliyya art gallery. The Abdeliyya gallery in La Marsa, a northern suburb of Tunis, hosted 3 or 4 “extremely provocative” works that criticized Salafist ideology and religious extremism in general. This is where it all started, Laraayedh will tell you. Criticizing sacred topics and the ‘godly entities’ of Islam – God, the prophet Muhammed (PBUH), and other prophets, will lead to a vexed Tunisian public.

Representatives from all colors of the political spectrum welcomed the minister’s analysis. And so, the assembly, in their responses to the minister’s speech, delved into a discussion regarding what is considered “sacred” and what is not. How are they to determine these things?

What was most appalling about the Tuesday plenary session is that while the assembly discussed what is sacred and what is not, security forces were being forced to retreat into corners. Young men (Salafists and non-Salafists alike) were being wounded. Was it really the apt moment to discuss ‘godly entities’ in the country’s highest and most legitimate governing body? The assembly, just like the minister, provided no solutions, and in the end, and no decisions were made. Not even an official recommendation was synthesized to be submitted to the minister. Our assembly members thought it was more appropriate to jab endlessly about “sacred topics.”

The cascade of blame Laraayedh presented to the assembly attests to his ministry’s lack of control of the situation. While at the assembly, the minister said that a curfew was not being considered. A few hours later at 8:00pm, national TV and radio stations announced a curfew from 9:00pm to 5:00am the next day. The decision supposedly came from both the Ministry of Interior and the Ministry of Defense – which is in charge of dispatching military squads throughout the country to enforce the curfew.

The minister’s critique of what was happening was, admittedly, near perfect (and this was what got the opposition listening). He condemned all forms of violence and renounced its use no matter the situation. He asserted, several times, that no matter how ‘provocative’ the art pieces were, the violence taking hold of the streets cannot be excused. However, it was part of the minister’s assessment that was all wrong. Listening to the assembly members mention Jalel Brik’s name so many times, and witnessing their debate on the sacredness of things (and other small particularities that do not mean anything in the long term), it becomes clear that Laraayedh and most assembly members fell into a trap.

What trap, you may ask?

In this equation that we have in front of us, art is a non-factor. Art, sacredness, God, Salafists, Jalel Brik mean nothing. Can we naively believe that a series of coordinated gangs spread out all across the capital and country – of young men sporting beards – are all mobilized as a response to a watercolor tableau? Or perhaps the endless rants that Jalel Brik makes? The attacks targeted a diverse set of entities too: the Tunisian general union’s HQs (UGTT), police stations, art galleries, and rank-and-file neighborhoods. How can we think that all this is in response to a painting? Give me a break.

All we need to do is go a few months back to the rally that Beji Caid Essebsi held – “The Nation’s Calling,” to understand what’s going on. Thousands gathered in a stadium to support Essebsi in his latest political endeavor, which appeared to be uniting most opposition political parties and all RCD / Destourien leftovers under one roof. The one phrase I heard at the rally over and over again was, “Essebsi is the man for Tunisia. We need a man like Essebsi to hold the country together.” The image of a benevolent, unifying figure – to bridge the Islamist-secular gap, created by Essebsi and his RCD likes to begin with – was heavily attributed to Essebsi.

It turns out that Essebsi is holding a second meeting (or rally) announcing the official creation of his party on June 16th. What better way to ensure the electoral success of this party then to make the country a mess only a few days before? What better way to have Essebsi the man of the hour – saving us all from divisive doom? Not to mention, several RCD-istes were (finally) put on trial yesterday, June 13th. Amongst them was the head honcho, former President Ben Ali. A question we should all be asking is: who will pay the trial any mind when gunshots can be heard in the air? Who will care?

Who will notice that Moncef Ladjimi, former Ministry of Interior’s Operations Chief in the Thala and Kasserine region and head of the Tunisian equivalent of the SWAT team, which is arguably the country’s strongest unit – came out of the trial as innocent? Do most Tunisians even know that Ladjimi is CURRENTLY working as an advisor within the ministry?

What better group to pick as the enemy other than Salafists? Salafists, who play into a set of well-developed predispositions (extremists, backwards, etc) propagated on both the international and domestic stage? According to source after source, most of those creating the chaos are not Salafist at all. Many videos circulating on social networking sites even show security officers themselves setting buildings on fire.

The counterrevolution is arguably succeeding in Egypt already – Ahmed Shafik, Mubarak’s former Prime Minister, is running for president – and he is not alone. There is a whole network supporting him and his candidacy. In a testament to the former party’s still dominating power, the Egyptian Supreme Court just announced a ruling this morning that Shafik is allowed to stay in the presidential race – defying a law passed by the parliament last month that barred prominent figures from the old regime from running for office.

Shafik has his “fulool” – the network of figures, spies, and internal security members that remained from the former regime – to help him back up the political ladder. The same goes for Beji Caid Essebsi. Some documents have already been unearthed indicating that Essebsi held, unlike what he tells the media, an official position within the RCD.

In terms of making the country believe their story, the RCD must be doing a terrific job – since the supposed “Salafists” even made their way to the assembly on Tuesday. They chanted, “No to blasphemous art,” and “Muhammed is our prophet.” While they were not violent, their presence in front of the parliamentary building’s green gates only acted to augment the pressure on assembly members and help them believe that the question is one of defending Islam and its principles. The timing was perfect: as the minister was giving a speech, the “Salafists” were treading their way to Bardo.

It is a real shame that in his speech to the assembly, Minister of the Interior Laraayedh did not mention measures for internal reform within the ministry. The RCD, which had total control of the ministry and used it for the sole purpose of keeping tabs on Tunisian citizens, is the root of all corruption within the country. Ever since Ben Ali left the country, Tunisia has been living in unknown space with unknown orientations on how to fight this corruption and to enact a stable and democratic rule of law. Laraayedh could have used this opportunity to show that there is no room for incredulity in assessing Tunisia’s internal security situation, which affects everyone.

Contrary to what western media sources are reporting, it is not only the “secular elite” who are peeved. It is the average, most-likely ideology free, young man or woman who wants to go to work every morning, but cannot, due to closed roads. It is the mother of 3 whose metro would not drop her off at her stop of choice – on Tuesday, metros would not enter the Intliaka area due to the chaos going on there. On their walk home, several women reported being met with groups of young delinquents throwing rocks at them. Walking turned into running home  – rushing just to get home safely and cook a lunch for the kids. It affects the kid who cannot walk home from school anymore – spending hours in a paid babysitting service.

The Ministry of the Interior, some argue, needs to be done away with altogether. There is no cold calculus of democratization, but security is the founding stone of any democracy and any society that can prosper and dare to dream. The Ministry of the Interior plays a tremendously large role into the democratization process in Tunisia due to how directly it touches the daily lives its citizens. Thus, a golden opportunity exists for the ministry to clean up its ranks once and for all.

Only history will testify to how the Tunisian government, the first post-“Arab Spring” one, will address this internal security failure. More specifically, it is a litmus test that the Ministry of the Interior must pass.