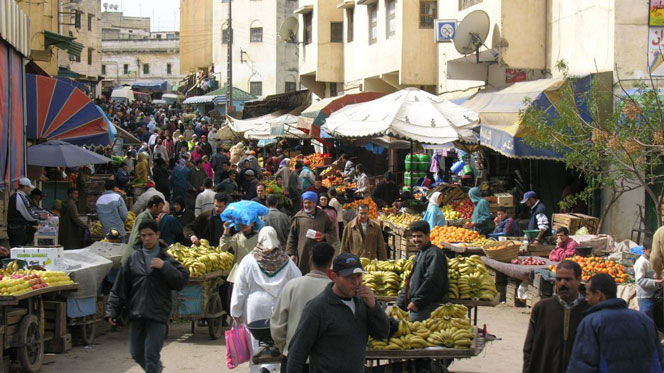 Sitting at a cafe’s terrace, I watch Aida pass me by. She has been walking around with her cart for quite some time now. Day and night, she drags along this metal structure, stops in front of piles of trash, and digs through plastic bags in search of a plastic bottle or two from which she makes a living. “To make a living,” or “to snatch bread away. For informal work, it’s all about survival,” said Abderraham Ben Zakour, an academic researcher. He has studied the subject of informal work for over 30 years now, preparing several studies for numerous institutions… You would think that the Ministry of Employment has addressed the problem already. However, this is not the case. It is impossible to find anyone to speak to about this issue – does nobody care about poor people, then?

“The problem is that the informal field is theoretical and is difficult to define. “The informal sector encompasses all employment activity that is executed with out registration, accounting, or paying taxes or dues. Such activity is beyond the state’s control and regulation. One might think that the state wishes to integrate these shadow workers, since their productivity could be considered as going to waste. This is not the case. The state is complicit in the problem. The state cannot do anything since it cannot integrate all these workers,” explains Ben Zakour.

According to Ben Zakour, there are 5 main types of informal work in Tunisia:

1. Micro-enterprises that set up shop on streets, which can be fined by the authorities. According to the INS, 490,000 out of a total of 520,000 informal workers in the country belong to this category.

2. Domestic service employment: those who do house work, embroidery, baking, or agricultural activities

3. Smuggling goods across the borders.

4. Towing or repair services of any kind wherein the relationship with customers is through telecommunication. Often the worker starts by opening up a micro-enterprise to create a steady client-base, then closing down the physical shop and continuing to provide services via word of mouth.

5. Activities to the weekly flea markets held throughout the country.

For Ben Zakour, the informal sector involves 35-42% of the labor force, and around 50% of 800,000 unemployed individuals, and represents 50% of the Tunisian GDP.

Informal sector workers are “industrial society’s nomads,” says Ben Zakour, because “they have a sort of dual mobility: they can very easily change locations. This is why around springtime, we observe a wave of migration from the western regions to the eastern regions – people looking to work as painters, carpenters, etc, and who later return to their homes in the winter.”  While seasonal work is better paid in larger cities, it is incredibly unstable. “If this population finds more stable work, for example with the CNSS, but with lower wages, it will not hesitate to settle with the work.” Informal workers search for stability, even if the wages are lower – since in the end, it is better to earn 350 dinars per month all year and ensuring stability than earning 800 dinars one month and not knowing how much you will earn the next.

The second mobility stems from these workers’ frequent change of employment. “Society’s capital is often very weak due to how easy it is to move from one form of employment to the next.” Ben Zakour also highlights the fact that these workers are multitasking and are engaging in several activities at once.

“The state knows and it lets it happen. During the course of my research, I interviewed a CNSS officer in Gafsa. He explained to me that it is better to let micro-enterprises get by and not pay taxes than to seek a solution to the problem because the risk of rebellion was too big. Over at the Ministry of Finance, I was told that the costs of monitoring tax records bypass possible tax revenues.” Informal work is a sign of the state’s failure. Unable to adequately respond to the country’s precarious situation, it has always had trouble in acquiring revenue, and the workers are paying for it: no social security, no retirement funds, no stability whatsoever – the only certitude is having to work until the end of their days.

Far from being about the single mother stereotype who meets the needs of her family with all that she can, the informal work sector touches all branches of society – all ages and all educational levels. There is, of course, the uneducated workers who have no choice but to make do with what they have.

But there is another group of people that is becoming increasingly affected by this type of precarious work. This group, however, could ultimately bring the end to informal work. They are the educated unemployed. Ben Zakour has also studied this phenomenon.

“I have begun to look at the number of graduates coming out of college since 2008, and I warned my students: they were a time bomb for the government. If they are structured enough, they can ask the state for things that it simply could not offer. We saw the result of this.”

These higher education graduates represent a new type of illegal workers. In recent years, Ben Zakour has found that the number of those receiving education and training far outnumbers the number of patrons. Small businesses whose growth was held back are now led by the younger, newer generation, which is better educated, has a long term vision, is unafraid of change, and that better understands the concepts of supply and demand. This generation will be the one that develops micro-enterprises, bringing them to the status of medium-sized business (MSB).

Finally, the development of worker skills and educational levels of these graduates can, at a certain moment, enable them to work within legal, formal employment sectors. Unable to rely on the state, they must rely on themselves. Ben Zakour cites an example of three young men, graduates in computer science and business, who launched a platform for creating computer programs for foreign companies and whose business enjoyed so much success that now, each one of them has his own company.

For this part of the population, working in the informal sector is somewhat of a springboard: they stay in the shadows just enough to accumulate experience and develop a client base. Once the machine is launched, they start working in formal employment.

For others, the situation is more complicated. For the past year, Ben Zakour  and economist De Soto have been focusing on one solution: there needs to be a legal framework that protects and helps them. Since the majority of informal workers do not own much, they have no capital to present to banks as guarantee and no material wealth to self-develop. The state must, then, distribute ownership titles in order to make the situation more uniform. “We can further develop this idea. In Sidi Bouzid, for example, we can give martyrs’ families permanent locations in the market to sell their goods, or redistribute agricultural land so that material wealth and resources can permit these families to start and grow their businesses.” This is a simple solution that would cost the state nothing, and would only touch 5-6% of state-owned land.

“In the long run, I think we will have to turn to this solution anyway.” Because, as Ben Zakour explained, “The state is outside of the law: it cannot kick out people that it does not have the means to care for. The state cannot legislate in whichever way it deems fit – it must adopt a strategy that will make up for its incompetence. If people are going out of their way due to the lack of adequate infrastructure and institutional support, we cannot expect them to comply with regulations without receiving anything in return.”

If the state does not find a solution close to the socio-economic gaps, they will only widen. While the young and educated will always find a way to get by, other, less educated citizens will indefinitely suffer a more difficult reality.