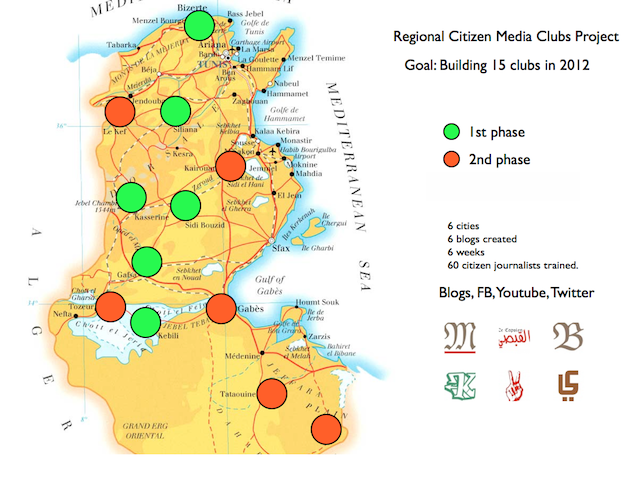 A tool that has been used and abused by the former regime’s propaganda teams. Information in Tunisia is described as centralized and monopolized by a few media outlets that are usually headquartered in the capital, Tunis. One initiative however, spearheaded by Nawaat jointly with the Ministry of Youth and Sports, aims to challenge this description by starting up six local citizen media collectives: in Sidi Bouzid, Kasserine, Bizerte, Makther, Gafsa, and Gebili – all regions located in Tunisia’s interior and south.

The goal is to have a national network of alternative and citizen media, using simple blogging platforms, YouTube, Facebook  and Twitter accounts as the collectives’ technical support. The project embodies the heart of grassroots journalism: decentralizing information by helping local citizen journalists create their own regional content through a network covering issues directly relating to local residents.

The project kicked off in October 2011 by hosting a total of six training sessions – one in each city – at the local and regional youth centers (Maison des Jeunes or دار الشباب). Ten representatives from each city attended each of the training sessions, which are taught by both Nawaat bloggers and Canal France Internationale (CFI) journalists. The average age of participants is 17. At the trainings, 60 participants learned how to write different types of articles and how to use appropriate angles in reporting.

Following the first cycle of training, with adequate tools available, all six groups have set up their respective blogs.

During Ben Ali’s reign, it was almost impossible, due to censorship, to surf through political websites on the computers at the youth centers. The vestigial remnants of such a time are the stickers that were still placed on the computers in the Sidi Bouzid youth center. The citizen journalism collectives attempt to break through all of that and to take down the firewall of censorship that existed within their local atmospheres.

The next cycle of trainings will be coordinated with the youth centers in the cities of Tozeur, Ben Guerden, El-Kef, Gabes, Kairouan, and Tataouine. Nawaat plans to create a national platform to aggregate all the blogs and consolidate the network by the end of April, and to have a total of 15 clubs by the end of 2012.