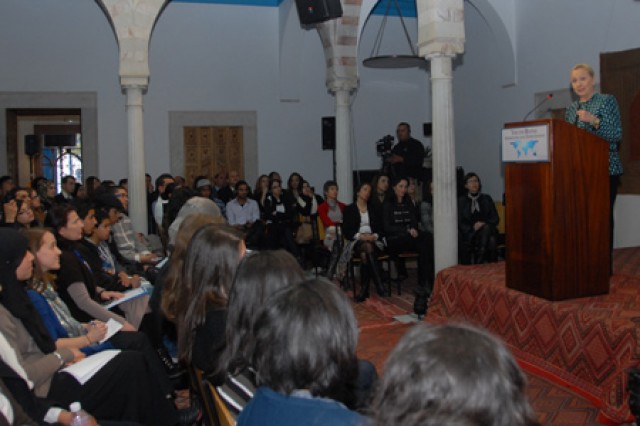 “Youth rising, aspirations and expectations”, is the name of the conference held on February 25, 2012, by Hilary Clinton, the secretary of United States in “Ezzahra Castle” in Sid Bousaid. Her visit to Tunisia is the second one in a less than a year.

The start with, The Attendees were familiar faces to a person who used to attend the American events in Tunisia. There were states alumni from exchange programs, students from the American Corner in Tunis and officers of Unites States Embassy-Tunis.

Some popular faces were present as well like Haithem El Mekki, a Tunisian blogger, Bochra Ben Hmida, a Tunisian feminist activist, “Mehrzia Abidi”, first deputy of the Constituent Assembly Speaker and the Tunisian actor, Mohamed Ali Ben Jemaa, who seems having a project sponsored by the United state Embassy.

After a long boring checking out for security reason, we ended up in a small and crowded room waiting for Lady Clinton who came late. She crossed the audience modestly and kept greeting people around her. She talked mainly about youth empowerment via an entrepreneurship program which will be launched soon and will connect leaders all over the world.

Actually, Unites States is forming a youth council led by 24 years old young man and aim to have a direct contact with young people, discuss and solve their issues. The Secretary of State announced, also, that Tunisia will hold the Global Entrepreneurship Summit in 2013 which is a priceless opportunity to get more jobs, access to states and enlarge one’s Network.

Moreover, Hilary Clinton shed the light of how fundamental the economic entrepreneurship is to create more jobs opportunities and she mentioned that during her meeting, in the morning, with the president, “Moncef Marzougui” and the Prime Minister, «Mohamed Jebali”, they discussed the further possibilities of partnership between both countries in all fields such as health care, higher education and security.

Finally, she concluded with reminding the three components to achieve the results of the Tunisian revolution which are a strong civic society, a well functioning economy and an uncorrupted government.