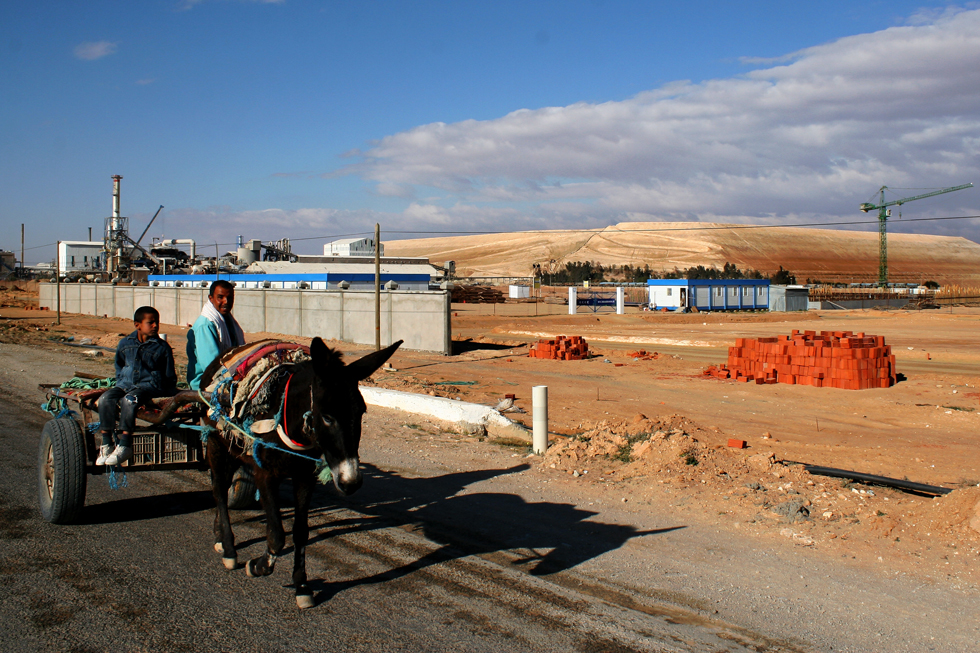 Mdhilla, population 15,000, in the southwest of Tunisia, is an industrial center in the mining basin with two clusters: a division of the Gafsa Phosphate Company (in the photo) and a regional division of the Tunisian Chemical Group. And yet, Mdhilla is one of the poorest towns in the country.

An impromptu meeting with the residents of the “Sariaa” (Rapid) neighborhood. The neighborhood is mostly made up of semi-nomad families who never stayed in one place for a long time. These days, the inhabitants no longer really leave, since poverty and rough conditions force them to stay put. The whole neighborhood is built on the bed of a wadi that has been progressively filled in as new buildings go up. (Nawaat.org/Malek Khadhraoui) 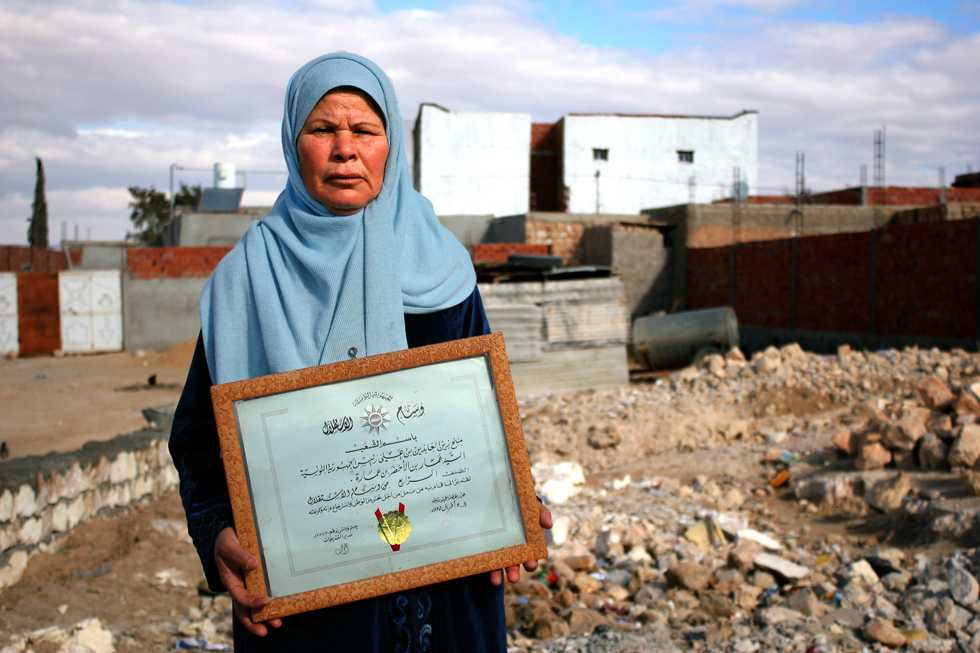 Mahjouba, 65, is a homemaker. All she has to show for her dead husband’s career is a medal and a meager pension: 200 dinars a month. “When other people demanded compensation for their years of resistance, my husband didn’t want to ask for anything. He always said that his commitment was for the good of the country and not to win special favors,” she says proudly. Without enough money to pay for an operation on her eyes, she is almost blind, and thinks only of her 6 sons, all unemployed. “We’re not asking for the moon,” she says, “just a job for at least one of them.” (Nawaat.org/Malek Khadhraoui) 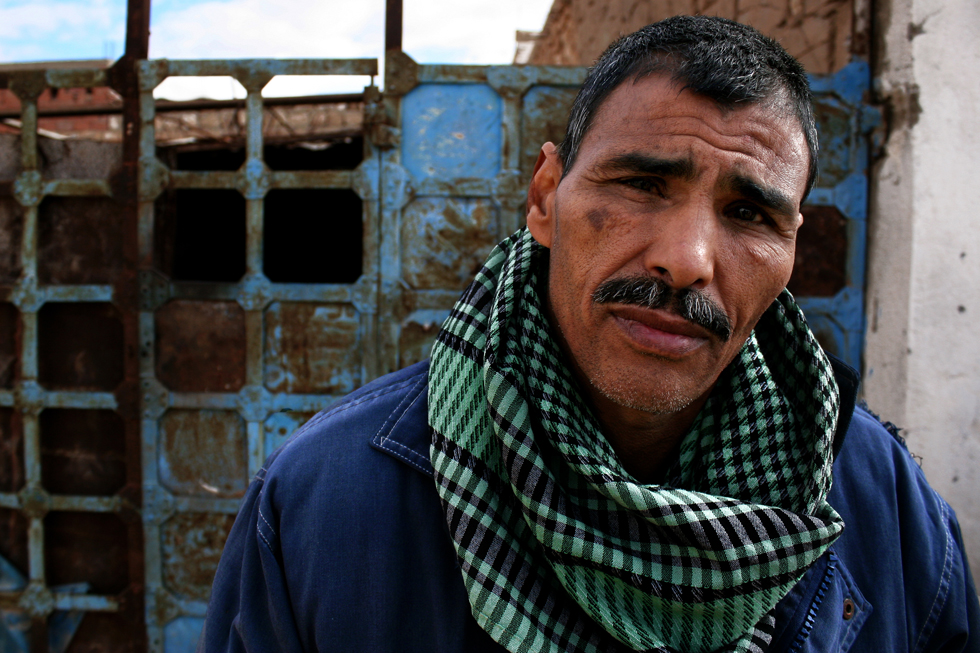 Mohamed, 50, backhoe driver. Unemployed for 2 months after a car accident. An army truck ran him over, and the passengers only called an ambulance. That’s where the nightmare began. After an initial operation at the hospital in Gafsa, he spent more than a month with an unsecured metal bar in his leg, and poor care brought on unbearable pain in his ankle and almost cost him his leg. His family and neighbors were able to scrape together 500 dinars for a second operation, this time in a private hospital, to attach the bar to his tibia. (Nawaat.org/Malek Khadhraoui) 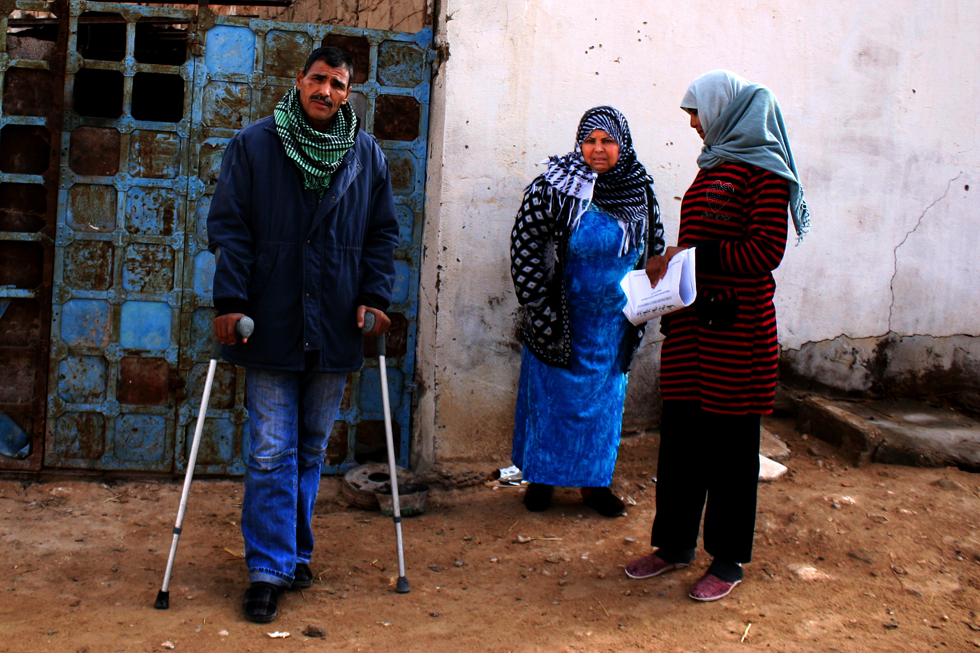 Unable to drive, Mohamed must find a way to support his little family. Their only income is his son’s salary, who earns less than 200 dinars a month in his brand new job on the “Al Hadira” construction site. His daughter is unemployed and takes in sewing jobs to help the family. (Nawaat.org/Malek Khadhraoui) 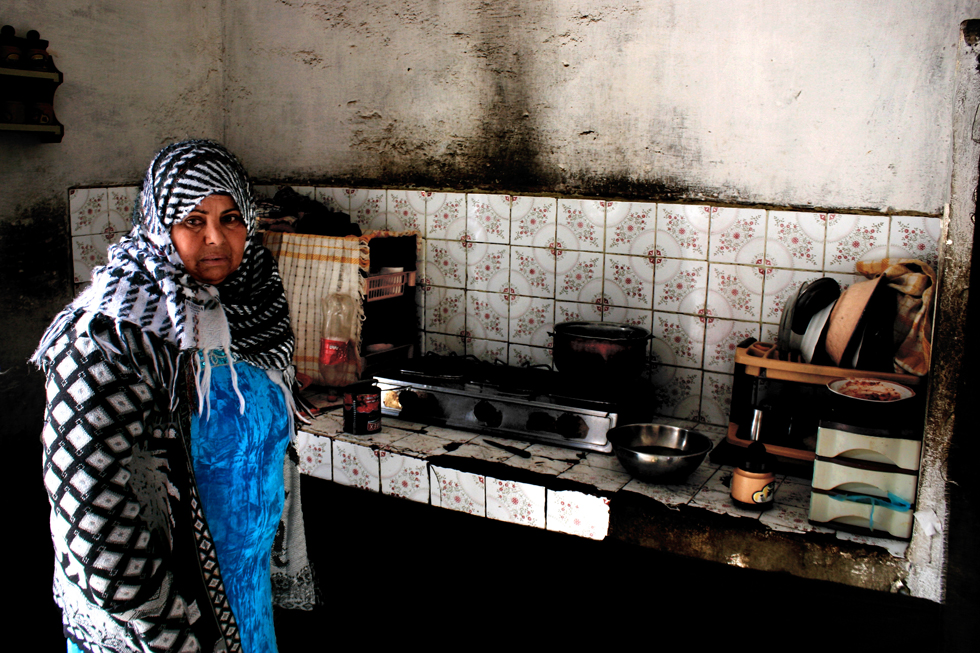 Mohamed’s family lives in a modest house with deplorable sanitary conditions. “We’ve always lived in abject misery here and yet it’s hard for me to get used to making dinner in a kitchen that’s falling apart,” confesses Mohamed’s wife, on the verge of tears. (Nawaat.org/Malek Khadhraoui) 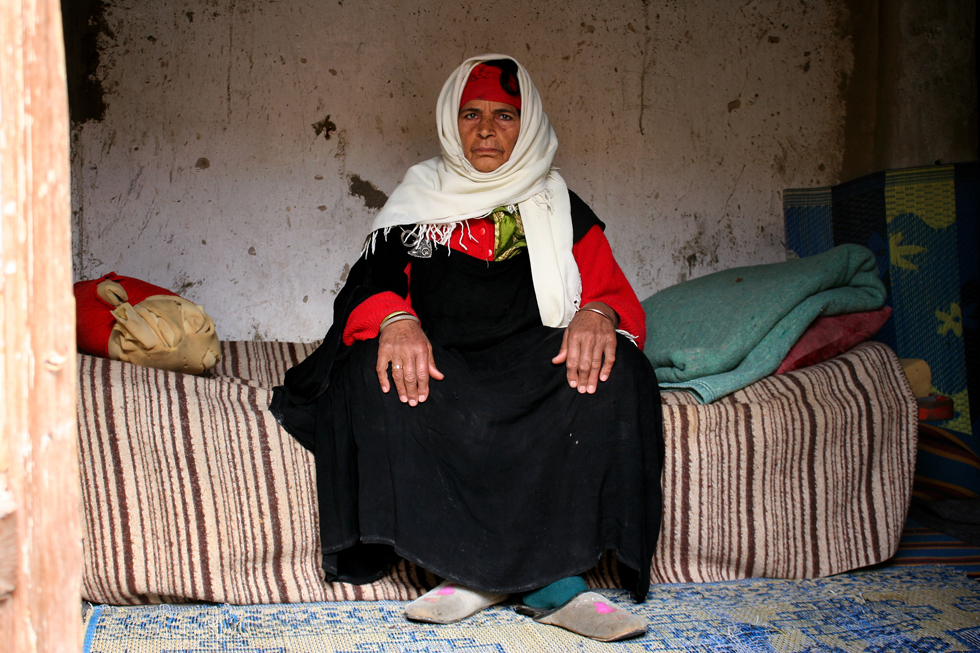 Jazia was abandoned by her husband, who could no longer stand her adopted son, whom she loved more dearly than anything else. “My ex-husband told me to choose between him and my boy, and I chose my boy.” Jazia’s piercing gaze defies life’s obstacles and demands respect. Completely unfazed by my camera, she chose to “pose” on her bed. (Nawaat.org/Malek Khadhraoui) 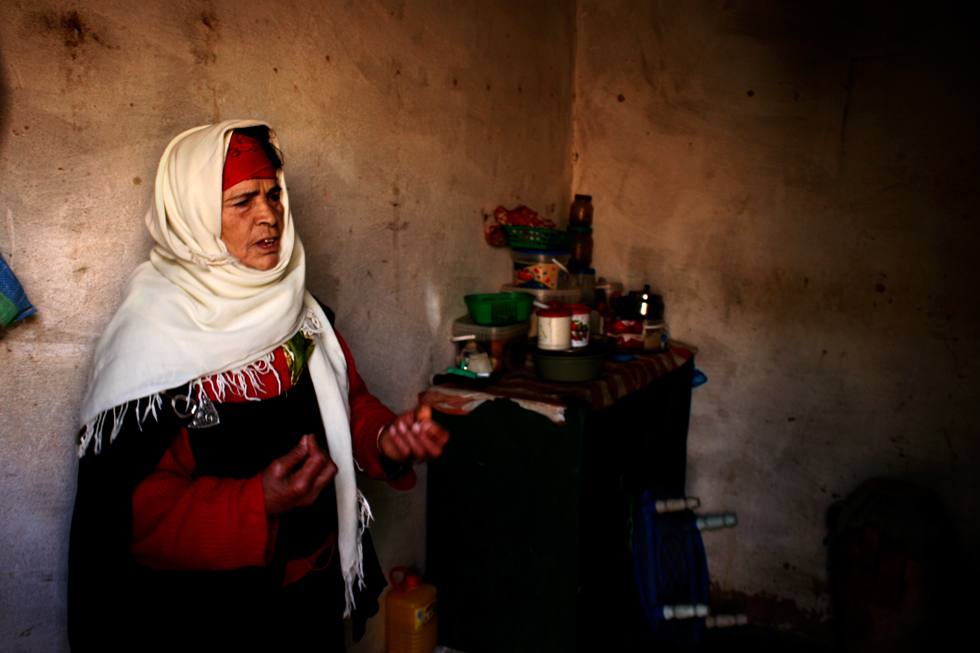 Jazia and her adopted son barely make ends meet, with a tiny alimony payment of 100 dinars a month. The explosions from the phosphate mine damage the houses and cause cracks in the walls. The result is moisture everywhere and walls covered with stains. Jazia’s house has not been spared this phenomenon. (Nawaat.org/Malek Khadhraoui) 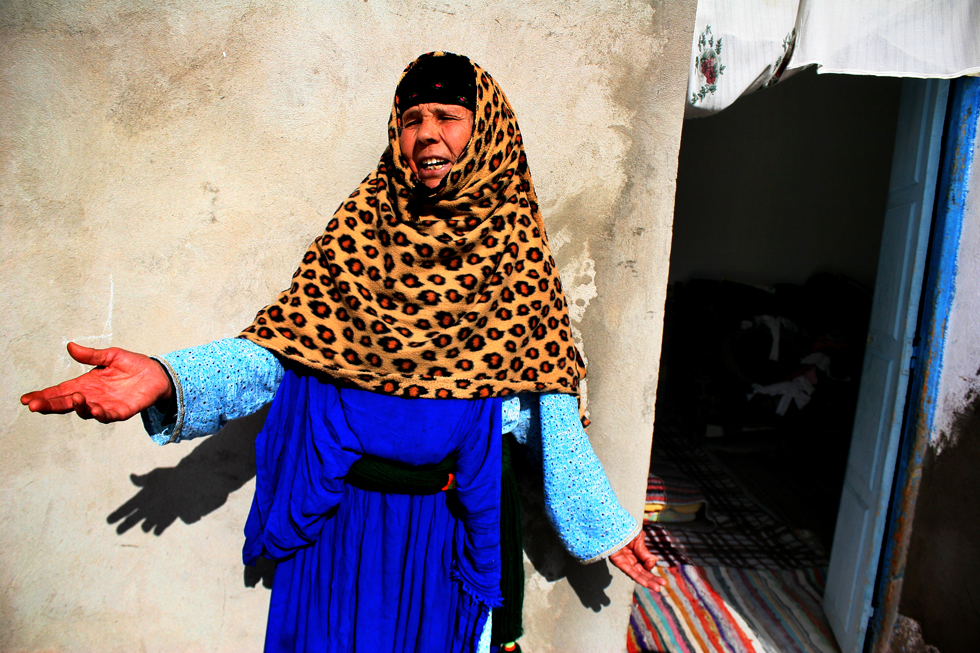 Romdhana is a fighter. She withstands life’s challenges with disconcerting detachment. The little melancholy smile on her lips and her benevolent face contrast sharply with her family’s dire living conditions. With arms wide open, she greeted me, repeating “look, look, look how we live” as if to say “No need for long speeches to get angry.” (Nawaat.org/Malek Khadhraoui) 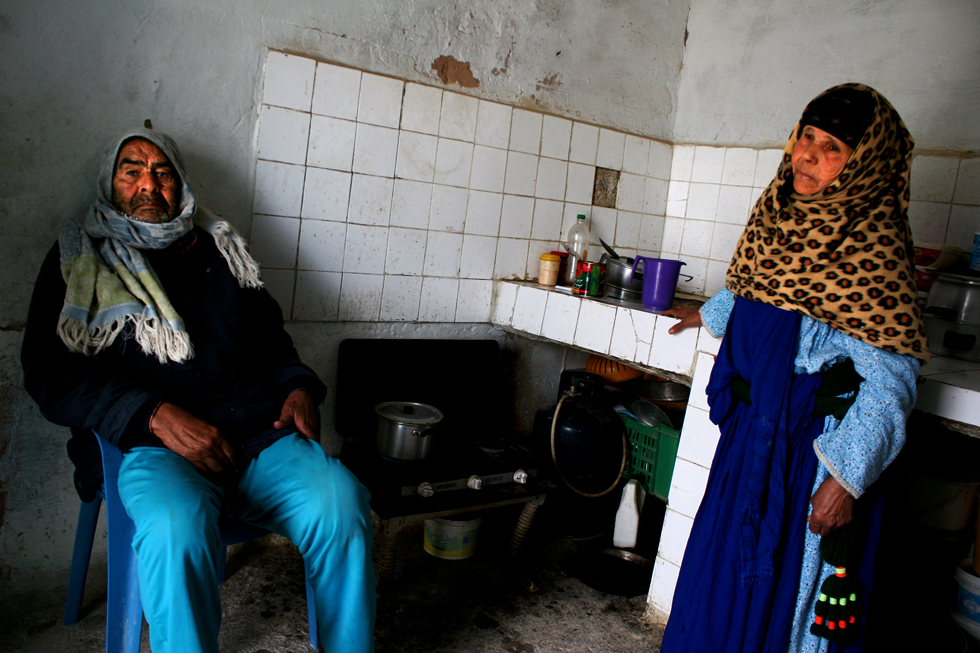 Jarw, 70, spent 35 years in the phosphate mines. His pension is a pittance: barely more than 200 dinars. He is practically deaf. “Because of the noise of explosives” explains his wife Romdhana. Jarw also suffers from kidney problems, which are very prevalent in the region due to the poor quality of the water. He spends his days sitting in a chair watching his wife take care of their house, which only has one water connection. Romdhana looks after her daughter, Massouda and her grandson Walid, who live with her since her son-in-law passed away. Mohamed, Romdhana’s nephew, also lives with them since his divorce. And this whole group survives on Jarw’s pension. (Nawaat.org/Malek Khadhraoui) 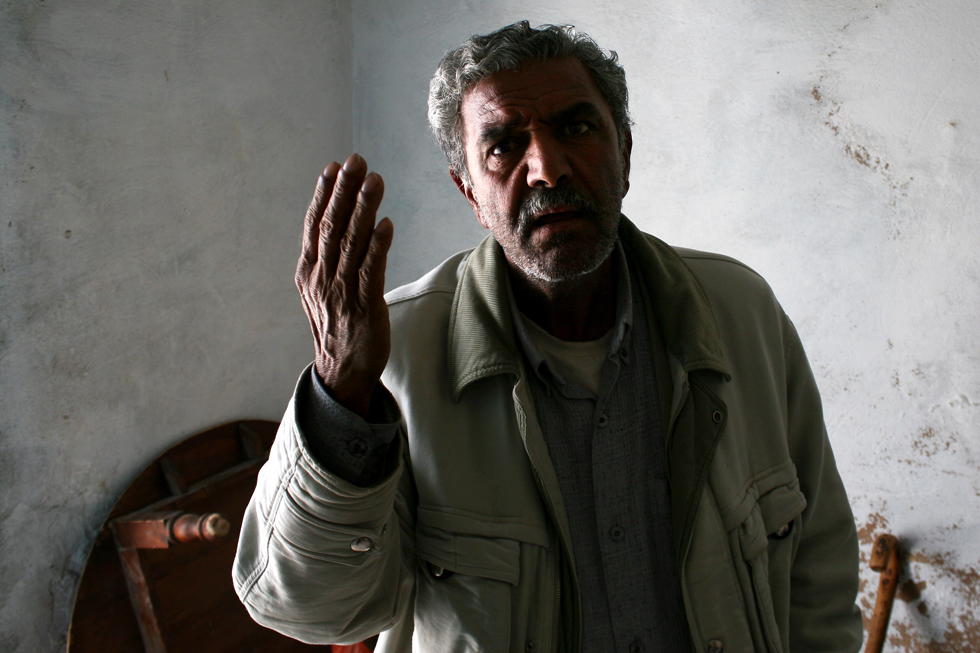 Mohamed’s professional life? Long periods of unemployment and odd jobs. Now 60 years old, he finds himself living with his aunt Romdhana after having separated from his wife, no longer able to support her. With a trembling voice and haggard eyes, Mohamed addresses me defiantly: “Is it really so hard to solve our problems and to give us a decent life? We’re living on gold. But all it brings us is sickness and poverty. It’s too late for us, but what about our children?” (Nawaat.org/Malek Khadhraoui) 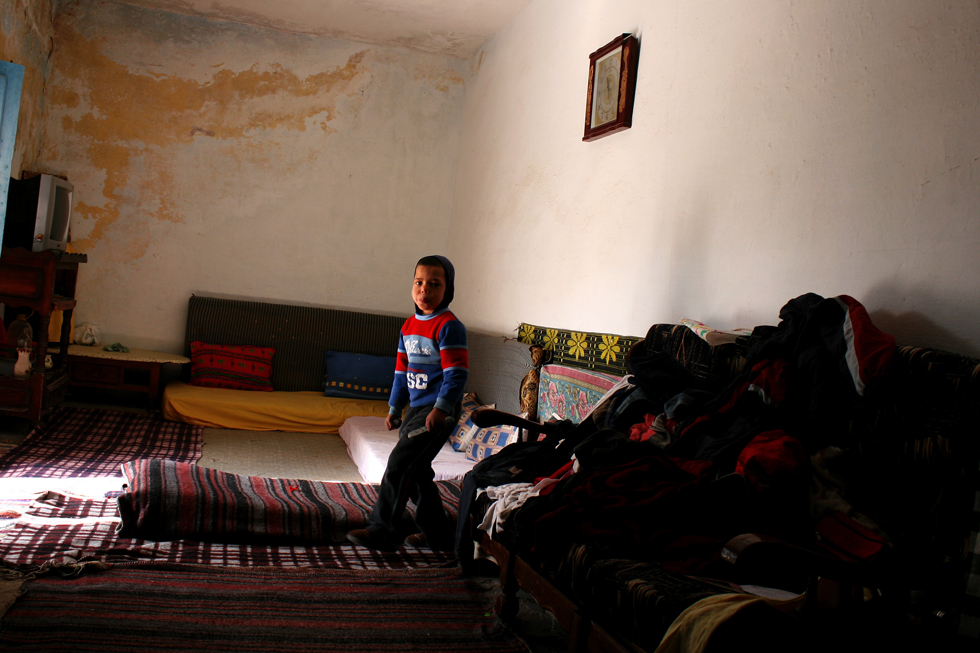 Traces of moisture are visible on all the houses in the neighborhood. They form abstract frescoes on the walls, a material sign of the hidden dangers that threaten the inhabitants. Asthma, chronic bronchitis and arthritis are common, and children are particularly affected. (Nawaat.org/Malek Khadhraoui) 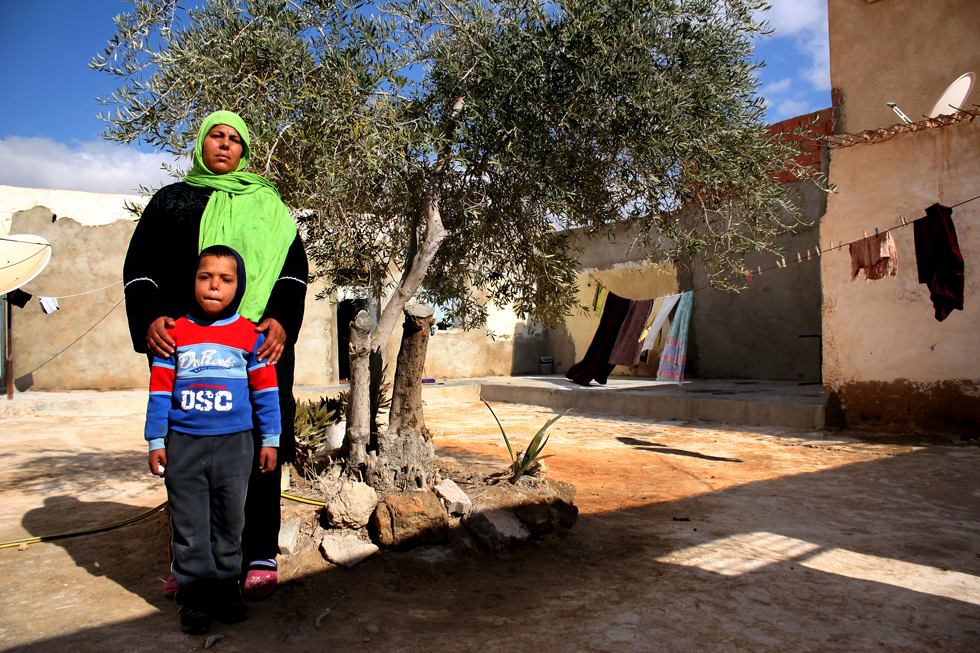 When Massouda thinks about her son Walid’s future, she doesn’t see anything. Stuck living with her aunt, this mother is concerned about her son’s delicate health. He suffers from asthma, as do many others here. Massouda knows that she has no one else to whom to turn to deal with her financial problems. Since her husband is dead and she is a widow with a child, it would be very difficult to find another husband. (Nawaat.org/Malek Khadhraoui) 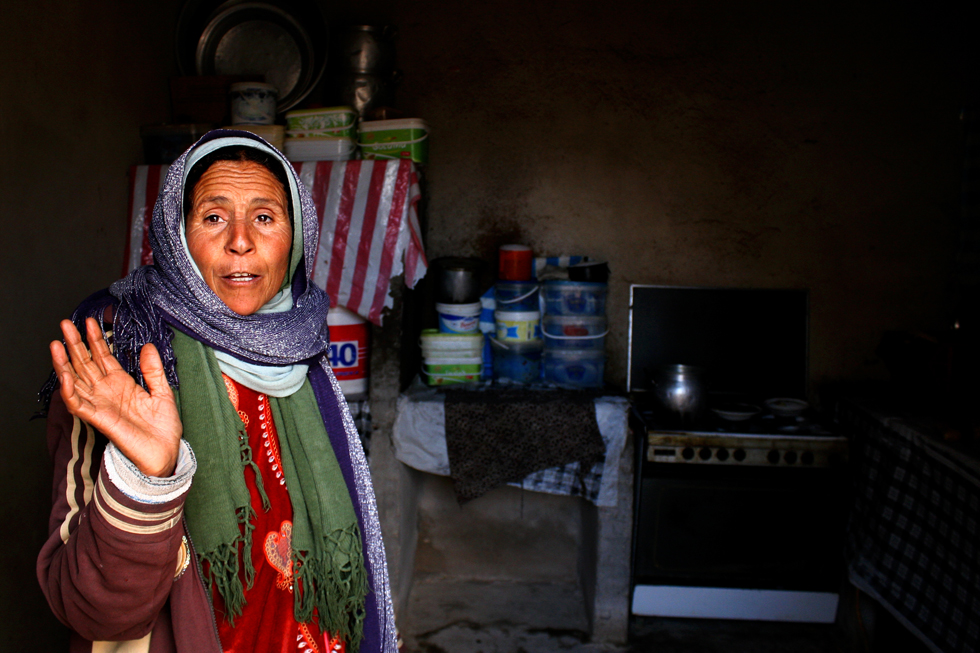 Hana, 50 and a widow, is raising her 5 children alone. Her husband died from occupational disease, after 18 years of working for the Phosphate Company. “My husband was a victim of the Company. He went in with good health and came out with a disability that kept him tied to his bed for 8 years. He died when the oldest of my children was only 10 years old.” None of Hana’s children could afford to finish their studies. These days, aged 18 to 30, not one of them has a job.(Nawaat.org/Malek Khadhraoui) 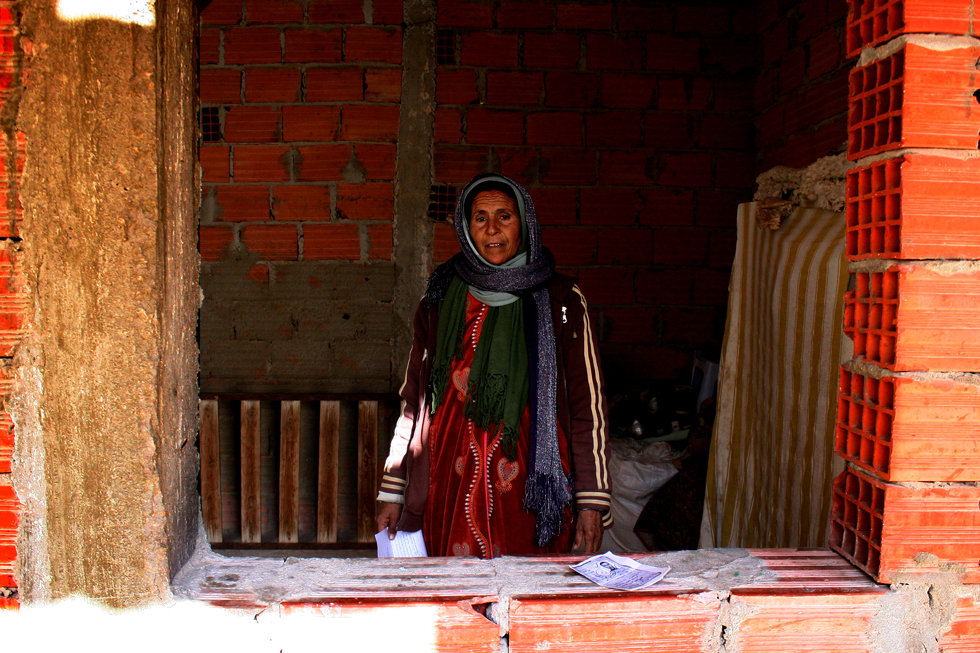 Hana’s entire family lives on a 235 dinar pension. Their house has no running water. “ I’ve been getting water from the neighbors for 12 years. It’s a good thing they are there.” Hana heard plenty of promises from the local RCD political party. The only thing she was able to get was a grant to add two bedrooms to her modest house. But she only received the first installment. Ever since, the two unfinished rooms serve as a junk room and play area for the neighborhood children. Hana has cardiac problems and is undergoing a difficult treatment. “I hope that the new President will be able to improve our lives” she says, without much conviction. (Nawaat.org/Malek Khadhraoui) 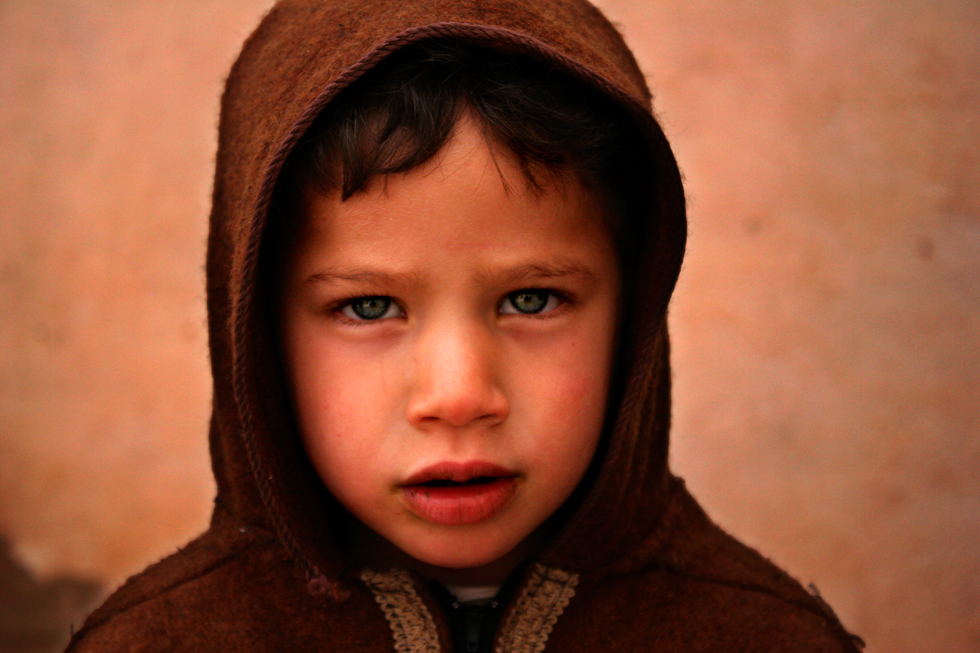 In each of these conversations, children are families’ greatest worry, but also their greatest hope. In a Tunisia desperate for change, what chance will this angelic 4 year old boy have to break the cycle of poverty and live a better life than his parents? (Nawaat.org/Malek Khadhraoui)