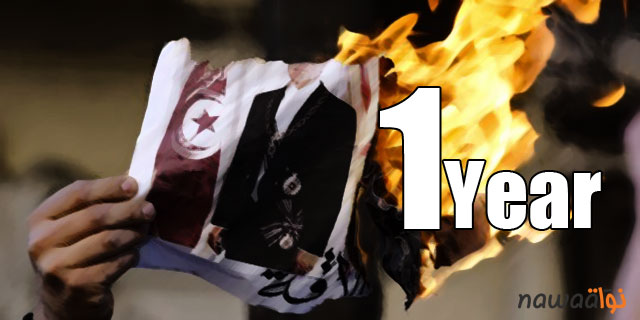 January, 14th marks the first anniversary of the fall of the twenty-three year old regime of Tunisian dictator Zeine El Abidine Ben Ali. Ever since that day, enormous changes have swept the cradle of the Arab Spring.

Tunisians have started to enjoy new freedoms and political rights: freedom of expression, and the right to assembly and protest. More than 100 political parties and hundreds of NGOs made of Tunisia a pluralistic country par excellence. And on October 23rd, 2011, Tunisians headed to polls and democratically elected their representatives in a constituent assembly.

But to what extent has Tunisia changed?

In the last parliamentary elections before the revolt, in 2009, the former ruling party, the Constitutional Democratic Party, (known by its French acronym RCD, and now dissolved), won 89.6%, and only nine parties participated in the elections. And this was the case for all the elections that preceded whether parliamentary, local, or presidential. During, the dictatorship of Ben Ali, the Interior Ministry used to organize the elections and release the official results.

Now, the Tunisia political scene is truly pluralistic with more than 100 political parties adopting different ideologies ranging from the right to the extreme left.

The elections were democratic and responded to international standards.

When Mohamed Bouazizi set himself on fire on December 17th, 2010, he did it in protest against unemployment. At the outset of the revolt, protesters from the country’s marginalized and poor interior regions were chanting “employment, freedom, and national dignity“, and ” employment is a right you gang of thieves” (referring to the Ben Ali clan).

So, the revolt started as a social movement against corruption, seeking equal economic opportunities, before raising anti regime slogans like “Ben Ali Dégage ” (Ben Ali get out).

Nothing has changed for those young unemployed men and women who ignited the revolt. They are still unemployed, with little or no opportunities to climb the social ladder. In a matter of fact, unemployment rate increased from 14% to 19% over the past year, and so do cases of self immolations. Last week, a father of three in the interior province of Gafsa, died after setting himself on fire in protest against lack of jobs.

The peaceful transition of power, after the democratic October 23rd elections, has offered a kind of political stability, which is very likely to boost foreign investment and attract tourists whose number decreased by 40% over the past year.
However, the crisis in the euro zone, Tunisia’s largest trading partner, is another challenge for the new government, as demand for Tunisia exports and foreign direct investment rates are very likely to decrease.

A new culture of protest

The popular uprising which toppled the 23 year old regime of Ben Ali has created a culture of protest in Tunisia. As the wall of fear fell down, and violent police practices started to ease, unhappy citizens resorted to the street whenever they felt that the transition to democracy is in danger.
But, as old habits die hard, violations against protesters were committed.
The most violent police intervention in the post Ben Ali era took place on February 26, when a peaceful protest calling for former interim Prime Minister Mohamed Ghannouchi, considered as too close to the former regime, to step down, turned into violent clashes between protesters, and security forces. The clashes led to the death of five people.
In May 2011, during an anti-government protest, security forces attacked not only demonstrators, but also bloggers and journalists.
On July 15, authorities used batons and tear gas to prevent protesters calling for political and judicial reforms from organizing a sit-in outside the Cabinet Building.

For 23 years, Ben Ali had kept a tight control on both state and private media outlets, which he used as propaganda tool.
In 2010, Reporters Without Borders ranked Tunisia 164th out of 178 countries in its press freedom index. In 2011, Tunisia came in the 154th place. So, little has changed, though dozens of print and audio visual media outlets saw the daylight after the revolt, and journalists became capable of tackling issues they ignored before, like corruption, and politics.

Journalists were physically and verbally attacked in post Ben Ali era.
According to Reporters Without Borders, in May and July 2011, 15 journalists were violently assaulted by the security forces while they were covering demonstrations.

On January, 3 two journalists covering a protest outside the ministry of higher education were assaulted by law enforcement officers. On January, 7 the decision of the PM Hamadi Jebali to appoint persons to head the state-owned media without consulting the commission of media reform, was controversial.

Nabil Karoui, director of the TV station Nessma is facing charges of “defaming” Islam over airing the French-Iranian film Persepolis, which contains a scene where God is represented as a white-bearded man. Pictorial representations of God are prohibited in Sunni Islam.
These cases are alarming, and pose threats to the newly acquired freedoms of press, and speech in Tunisia.

With the departure of Ben Ali, Tunisia, a country with a grim past when it comes to human rights, took major steps to promote them.
In September, 2011 former interim government presided by Beji Caid el Sebsi lifted restriction on the Convention on the Elimination of All Forms of Discrimination against Women (CEDAW). This is “an important step toward gender equality” said Human Rights Watch.
Earlier the same year, Tunisia joined the International Criminal Court, and ratified the Convention against Torture.

But in a report published on December, 17, 2011, Human Rights Watch urged Tunisian’s constituent assembly to “urgently revise laws to ensure freedom of speech and the independence of the judiciary” since “Legal reform in those two areas is key to safeguarding the human rights of all Tunisians“.

Also, the families of those killed or injured by government forces have told Amnesty International that many of the alleged perpetrators are still free and that some have even been promoted.

Tunisian authorities are often criticized for their inability to persuade Saudi Arabia to extradite Ben Ali, who was previously convicted in absentia for many years in prison for embezzlement, illegal possession of weapons and narcotics, housing fraud and abuse of power, and is now facing charges of murder. But, his trial is meaningless to many Tunisians, as long as he is at large in Saudi Arabia.

Besides, a fact-finding mission established right after the departure of Ben Ali, to investigate violations committed during the revolt has not yet published its report.
This slow pace of investigating into the murder of protesters outraged Tunisians who for several occasions took to the streets raising the slogan “People want independent judiciary”.
Accountability is essential to build a democratic Tunisia, where human rights violations are not tolerated.

“If the government is serious about protecting human rights and establishing the rule of law, they cannot skip providing truth and justice to the families of those killed or those injured and holding those responsible to account,” said Hassiba Hadj-Sahraoui, Amnesty International Middle East and North Africa Deputy Director.

A pluralistic society and the democratic election of October 2011 are probably the priciest fruits of the Tunisian revolt.
But, socially, and economically speaking, little has changed. In fact, things have even gotten worse, as unemployment rate increased and tourism industry badly hurt.

Former interim government ratified human rights treaties like the Convention against Torture, but the pace of investigating and holding accountable those responsible for human rights violations during the revolt, and before is too slow. Tunisians can now express themselves freely, criticize the government, and peacefully protest, and assemble. But protesters and journalists alike continue to be assaulted.
It is definitely a long way to go for Tunisia, in its democratic journey, and after all, one year is not enough to replace half century of uninterrupted dictatorship by a genuine democracy.

Meanwhile, all eyes are turned on the new interim government presided by Hamadi Jebali from the Islamist party Ennahdha, which took up duties about a month ago. The government faces pressing economic and social issues, but it will be closely watched when it comes to human rights, freedoms of speech and press.