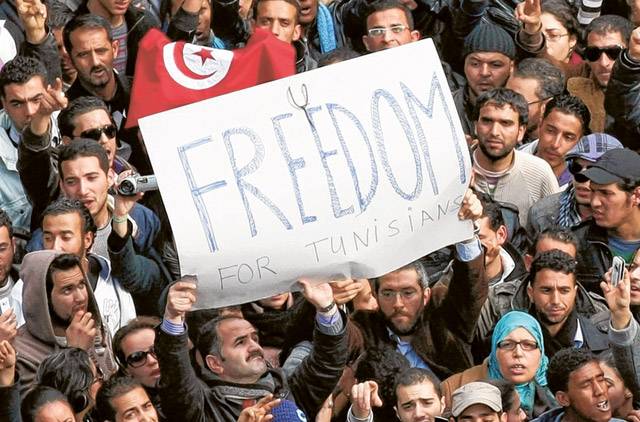 Media and Internet censorship, as well as harassing, jailing, and often torturing anyone who used to dare and speak out against the government have undoubtedly characterized the Ben Ali regime. Tunisian journalists, in particular, suffered from regime muzzle. This was the case of journalist, Fahem Boukaddous, who was condemned to four years in prison in 2008 for covering the events of the mining basin in Gafsa. Also under the cover of anti terrorism law, many political opponents were sentenced to long prison terms, following arbitrary, and unfair trials.

During those years, NGOs like Reporters Without Borders, Amnesty International and Human Rights Watch, have been continuously condemning these practices, and alerting the international community about various human rights violations committed by the Tunisian regime. Then it is natural that the battle for freedom was at the heart of the uprising which toppled the former regime. Consequently, the rediscovered freedom of speech is one of the biggest achievements of the Tunisian revolution. Yet, the heavy toll of more than 300 deaths, and several hundred injured who are still paying the price for their bravery, did not prevent a comeback of practices, we deemed from the past, and of clear violations of freedom of speech.

When the Army Becomes a Censor!

In May, 2011 almost five months after the departure of Ben Ali, five Facebook pages were censored in Tunisia, following an order issued by the military tribunal. These pages were harshly criticizing the army, namely General Rachid Ammar, and questioning his honesty, his independence, and his commitment towards Tunisians. The Tunisian Internet Agency (ATI) an eternal scapegoat for censorship in Tunisia, took in charge the filtering of these pages listed on the website : http://filtrage.ati.tn/. After putting into practice the decision of the tribunal, the ATI decided to finally lift censorship on these pages due to a breakdown in global filters, as it is indicated by the following message available on the filtering website :

For technical constraints, the equipment at the disposal of the Tunisian Internet Agency (ATI) can no longer ensure a web filtering service in accordance with the requisitions (issued by the tribunal)

The case of Nabil Hajlaoui, who was arrested on November, 9, 2011 following the events that shook the city of Sidi Bouzid, after 23rd October elections, when several seats won by the independent lists of Al-Aridha Chaabia at the Constituent Assembly, were disqualified, has showed once again the intransigence of the army, when the integrity of its core is directly targeted.

Senior police officer, Samir Feriani, was arrested on May, 29, 2011 after addressing a letter to the Interior Minister Habib Essid in which he denounced a number of senior officials, as responsible for the murder of protesters during the uprising, and for the destruction of incriminating archives concerning former President’s relations with the Israeli Mossad.

Though, the accusations made by Samir Feriani, have not in any way incriminated the army, he was detained for more than four months in the military barracks of Aouina, before facing trial in a military court for “harming the external security of the state“, distributing information “likely to harm public order“, and “accusing, without proof, a public agent of violating the law“. Samir Feriani has been temporarily freed, in September, 2011 following a nonsuit ordered by the military court. However, his trial in front of a civilian court is set to take place on February, 16, 2012.

During the events of Kasbah 3, on July, 15, 2011, several journalists, bloggers, activists, and protesters, were violently repressed by the police. About twenty persons were arrested and their cases were referred to the military court of Tunis, and some of them were even forced into conscription. One of the main charges filed against the protesters was the violation of the state of emergency, in force since January, 15, 2011, and extended several times by the interim government. The state of emergency was extended on November, 29, 2011 to December, 31, 2011. The fact that the state of emergency is still in force legitimizes and justifies the attacks on the fundamental freedoms of citizens.

From Political to Moral Censorship

During the regime of Ben Ali, censorship was mainly a state practice, and political. Since January, 14, some have been denouncing a drift towards a religious and moral censorship which has started to spread in an underhand manner via influence groups.

Also taking advantage of the rediscovered freedom of speech, Islamists were trying to act as a real social pressure group. Since, January, 14, the protests of Salafists calling for the implementation of an Islamic State were numerous. In May, 2011 they invaded Habib Bourguiba Avenue, to pray. This protest, led the Interior Ministry to prohibit the occupation of a public road to perform prayers, adding that these practices are alien to Tunisian society.

The occupation of the Faculty of Arts of Manouba by a group of salafists calling for the right of female students to wear the Niqab, also shows the newly acquired audacity of these religious fundamentalists in asserting their social vision.
The legitimate demands of these religious fundamentalists can take serious dimensions, when it comes to defending what they see as attacks on religion or morality.

During the last months, several violent events succeeded each other, such as the attack on Africart, when this movie theater screened the film « Ni Allah ni Maître » (Neither God, nor Master) of the filmmaker Nadia El Fani. Following the screening of the Iranian film “Persepolis” on the private TV channel Nessma TV, violent protests also took place. And recently, the Tunisian band “Awled El Manajem” was attacked in Meknassi. Videos that circulated via social networks, featured organized attacks by religious fundamentalists on places they consider as “immoral” (brothels, and bars,..). What others see as violations of freedom of speech, fundamentalists consider as religious harassment.

Islamists in Sfax attacking a march for freedom on October, 21, 2011. par bluemun

These protests are taking a more serious dimension, as they are accepted by the government, and leading to legal actions against those who are now accused of disturbing the public order. Meanwhile, the protesters are released, or pay absurdly low fines.

In the case of the aforementioned movie « Ni Allah ni Maître », described by Taoufik Ben Brik as “ideological pornography”, the director Nadia El Fani is now facing a complaint lodged by three lawyers who are accusing her of “violations of the sacred , morality and religious precepts”. But for Nafia El Fani, this legal action is a real violation of freedom of speech in the name of religion. “We are not going to move from Benalism to Benislamism ?’’ she said recently.”

Nabil Karoui, the director of Nessma TV, and those who took in charge the screening and the subtitling of “Persepolis” movie, are together facing a complaint filed by more than 140 lawyers for “violations of the sacred , and moral values”, and for “harming the public order”. The trial will take place on January, 23, 2012. Sofiene Ben Hmida, a Nessma TV journalist described this legal action as “a trial of conscience which brings to one’s mind the inquisition period“.

The complaint lodged by three lawyers against the Tunisian Internet Agency (ATI), to censor pornographic content on the Net is another instance of this new kind of censorship, that faces the post-revolution Tunisia: moral censorship. Despite the multiple attempts of Moez Chakchouk, CEO of the ATI, and a number of Tunisian netizens to raise awareness of the public opinion about the responsible use of Internet without resorting to censorship, the ATI lost its appeal, and the appeal in cassation is expected to take place in February, 2012.

All these cases show a disengagement from the state and an absence of a firm and clear position against all kinds of freedom of speech violations, giving room for social pressures, and for the “independent” judicial system to use a range of liberticide laws, still in force.

We cannot deny that unprecedented winds of freedom have blown over the Tunisian media in the post revolutionary era, where it is no longer a taboo to criticize politicians. After the October, 23 election, and the arrival of a legitimate, and democratically elected government, now we can ask ourselves if this freedom of criticism will continue.

On another hand, the wave of freedom has brought with it a drift towards slander, defamation, and baseless rumors, which are mainly the results of a search for scoops, and information (or disinformation) war, mainly targeting the islamist Ennahdha clan, and its partisans (and more generally the troika). These abuses were denounced by those close from Ennahdha, and who are often the target of these very rumors, namely PM Hamadi Jebali, Rached Ghannouchi, and Soumaya Ghannouchi, who has recently threatened to bring to justice any person who disseminates rumors about her.

This search for sensationalism, currently invading Tunisian media, is very dangerous, and can lead to the justification of a comeback to censorship, or at least auto censorship which characterized the Ben Ali era. So, making Tunisian media aware about their responsibility to disseminate verified and unbiased information is crucial in protecting freedom of speech. It is also crucial to reform laws that were used to silence protesting voices, and which today represent a danger to the fundamental freedoms of citizens. For instance, article 61bis, of the penal code amended in June, 2010 states that “any Tunisian who wittingly establishes direct or indirect relations, with or contacts, agents of a foreign power, institution, or organization, with an aim to incite damage to the vital interests of Tunisia, could spend up to 20 years in prison“. Vagueness surrounding the term “vital interests” may allow all kinds of hazardous and subjective interpretations.

Besides, and since the new justice minister is from Ennahdha party, some are worried about a return to a moralistic justice. In this regard, the upcoming trials concerning freedom of speech, need to be watched carefully, because they will directly create case law, and shape the judicial system of the democratic Tunisia.