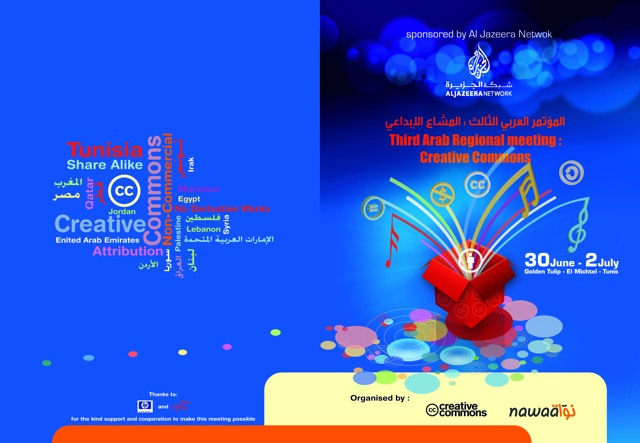 These are grassroot communities made up by youth and civil society members coming from different fields (education, law, art, music, etc) that are actively spreading through their works values as openness, sharing, peer-production, collaboration, innovation.

The 3rd Creative Commons Arab regional meeting will be a celebration of these communities and these values.

Tunis has been chosen as a symbolic location, the place where, in December 2010, the Arab youth started to re-shape the Region and gave a new burst to creativity and cooperation as the basis of a better future for the new Arab generations.

Creativity, peer-production and “sharism” will be at the basis of this meeting, which will feature a set of workshops given by the Creative Commons Arab communities to youth and civil society participants in Tunis with the following goals:

Most of the workshops will be “hands on” and will be entirely led in Arabic. The outputs (visual art works, music works, blogs, etc) will be regrouped and featured online after the meeting.

Each workshop will address one of the following issues: 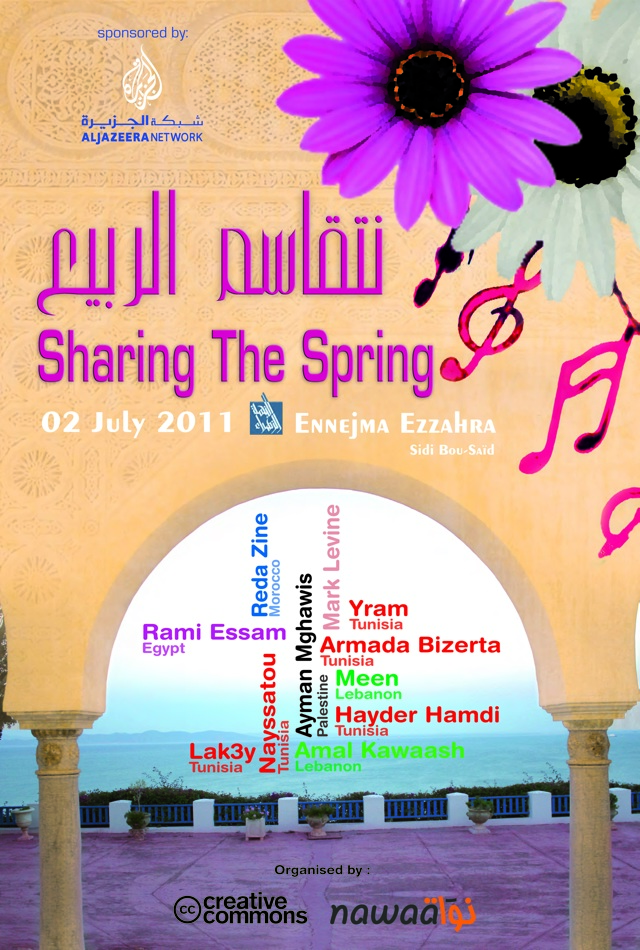 The 3rd Creative Commons Arab regional meeting would like to celebrate openness, creativity, innovation and the culture of sharing by organizing a final concert in Tunis in the evening of 2nd July.

Musicians coming from all across the Arab world but, particularly, Tunisians, will pay a tribute to these open values by playing their music (pop, hip hop, rock, classical Arab music, etc) in a “jam session” sort of evening, where remix between the different artists will be encouraged and peerproduction will be celebrated.

All the music played during the performance will be “open-source” music, released under a Creative Commons license (probably the CC BY NC, attribution-non commercial) in order to have it available for legal sharing and copying for non-commercial purposes.

The purpose of the concert is also to produce the first CC-released Arab music CD which will feature the best of young talented musicians coming from all over the Arab world.

This CD will be launched and distributed in the fall 2011 through a viral social game that will touch most of the Arab capitals and the online Arab communities.

Both the concert and the CD will try to boost the idea of open-source music and legal sharing in the Region, encouraging the Arab youth to share music legally but also to produce their own, through peer-collaboration and remix which is allowed by the CC license itself.