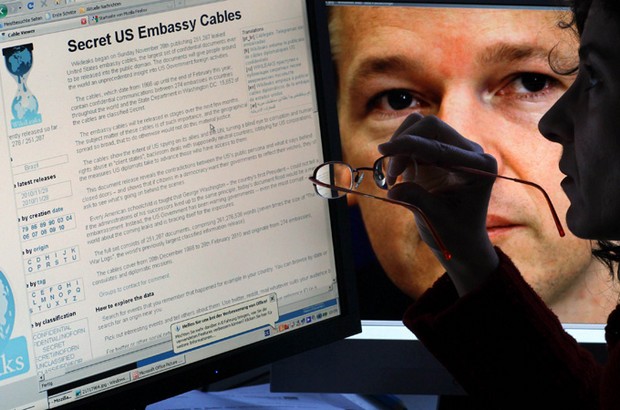 The US has praised the internet as a tool for making governments more accountable, but they do not like it when their classified information is posted online for the world to see [AFP]

Since the release of the ‘Collateral Murder’ video in April of this year, Julian Assange has been a hunted man, with calls for everything from treason (rather ineffective, given that Assange is an Australian citizen) to vigilante justice. Now, in the wake of Cablegate, it is no longer just Assange and his cronies, or WikiLeaks, but Internet freedom that is at risk.

For some time, free speech activists have expressed concern about the powers that private companies have over online speech, an issue dubbed “intermediary censorship” by researcher Ethan Zuckerman.

From Facebook, where last week Egyptian anti-torture and human rights groups were removed for a minor violation of the social networking site’s terms, to YouTube, where violence or nudity can trigger a content review, companies have the ultimate decision over what users may or may not post, despite an increasing role as arbiters of the public sphere.

In the case of WikiLeaks, it appears that companies began to succumb to pressure after a public call from US Senator Joe Lieberman who, on December 1, took credit for forcing Amazon to drop WikiLeaks from its servers. Amazon, for their part, issued a statement that their decision to drop the whistleblowing site was actually their own, claiming WikiLeaks had violated their proprietary terms of service.

Whether Amazon made the decision on their own or, more likely, responded to pressure, might be inconsequential were it not for the chain reaction it seems to have caused.

Less than 24 hours after Amazon’s decision, US company Tableau Software removed data visualisations published by WikiLeaks on the site. The next day, EveryDNS.net terminated the WikiLeaks.org domain, resulting in a move from a .org to a .ch domain, and PayPal cut the organisation off from receiving donations through its platform.

Unconfirmed rumours are circulating that “WikiLeaks” is a banned keyword on certain social networking sites, and complaints that the term isn’t trending on Twitter abound.

So far, there’s no evidence that any of the account deactivations were a result of a court order. With the exception of Tableau, which acknowledged their actions were in response to Lieberman’s calls, each of the companies gave different reasons for their actions.

Amazon called it an issue of rights ownership, while PayPal claimed their services could not be used to “encourage, promote, facilitate or instruct others to engage in illegal activity”. EveryDNS claimed their decision was a result of persistent cyberattacks, and that they had given ample warning.

Though the French government appears to be looking for ways to push WikiLeaks off servers there, so far the takedowns remain limited to US companies. In fact, Swedish host Bahnhof has made it clear they won’t budge unless proven to be in violation of Swedish law, while a court in France court ruled that French provider OVH was not required to shut down the site.

Though WikiLeaks remains online for the time being, with 507 mirrors available at press time, access to the site remains off-limits to an increasing number of people worldwide; the governments of Tunisia, Thailand, and China have blocked users from visiting the site, while the US government has warned federal employees not to access the documents, stating that they’re still considered classified.

The ‘ban’ has extended even to students. Based on the advice of an alum now working for the state, the Columbia University School of International and Public Affairs (SIPA) has warned students who wish to work for the government that linking to the documents could put them at risk for rejection.

Whether you support or revile WikiLeaks, these latest developments have serious implications for Internet freedom.

First, there is the fact that the Web is privately held, despite how we may see it; every time we publish to Twitter or Facebook, we risk violating proprietary terms of service that may or may not be in accordance with the principles of free speech.

A further implication is perhaps evidenced by WikiLeaks’ experience with Amazon hosting: If you engage in speech that your government doesn’t like, they can enact pressure on private companies, which are well within their rights to shut you down.

Of course, to observers of Internet censorship, this should come as no surprise.

We all remember what happened when Google capitulated to China’s 2006 demand that the company either censor or be censored; though Google stayed on for four years, their January 2010 decision to stop censoring keywords resulted in China blocking the site.

Those who think the United States incapable of such a thing need only look to the proposed “Internet kill switch” that would give the president rights to “shut down” the Internet in an emergency.

The implications for broader Internet freedom come into sharper focus when taking into consideration the following quote from Hillary Clinton, the US secretary of state.

In a January speech on Internet freedom Clinton said: “Information has never been so free … Even in authoritarian countries, information networks are helping people discover new facts and making governments more accountable.”

If we are to assume that — potential risks to individuals aside — WikiLeaks’ latest release makes the US and other governments more accountable, than it would appear that either the Obama administration has changed its tune considerably over the course of a year, or that their net freedom policies don’t apply to democracies.

Ultimately, there’s no going back. WikiLeaks has changed the game, and like it or not, the cables are exposed for the world to see, with more leaks to come.

Even if the US or another government succeeds in tracking down and detaining Julian Assange, there are undoubtedly thousands lined up to take his place.

The only choices left, then, are to shut down the Internet — all of it, everywhere — or find a way to adjust to this brave new world.