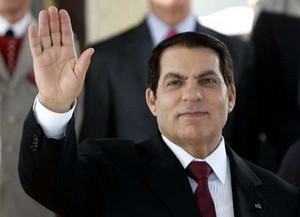 While journalist Fahem Boukaddous is on a lengthy and life threatening hunger strike at Gafsa prison to protest, as you all know, a 4-year jail sentence imposed on him in July for doing his job, President Ben Ali claimed on Sunday that “no one in Tunisia has been deprived of his/her freedom or called to account because of his/her differing opinion or critical utterances,” reported the official news agency Tunis-Afrique Presse TAP).

Speaking during a ceremony marking the anniversary of the bloodless coup that brought him to power 23 years ago this Sunday, Ben Ali added that his policy of “Change” has “no aim but to elevate Tunisia to the highest ranks” and announced a “series of vanguard measures and decisions in the political field as well as in the different economic, social and cultural sectors,” said TAP

Reacting to the local and international outcry provoked by the notorious amendment to Article 61bis of the Penal Code in mid-June, he denied that “the intention behind the amendment” was to restrict freedoms. However, he acknowledged that this amendment “is aimed only at the persons who deliberately set out to undermine the country’s vital interests and economic security by inciting, or colluding with, an external party.”

“Besides, this amendment is not a novelty as such provisions do exist in the legislations of many countries,” Ben Ali said.

He also reiterated his claim that the activities of the Tunisian League for Human Rights have been “hindered in recent years as a result of internal differences” and offer to “help find a solution to its crisis so that it can resume its activity and remain above narrow-minded personal and partisan considerations and away from any exploitation.”

Echoing calls initiated by Ben Ali’s family and advisors on the “Architect of Change” to run for a 6th term in office in 2014, the ruling Constitutional Democratic Rally (RCD) exhorted its president to “keep on leading Tunisia’s progress in the coming stage, on the path of reform, change and action, and to forge ahead in discharging his historical noble mission in the service of the people.”

Like similar ruling parties in the region, North Korea and Burma, RCD urged Ben Ali to stay in power to provide the country with “the best chances of excellence and radiance and reach the highest levels of invulnerability and glory.”