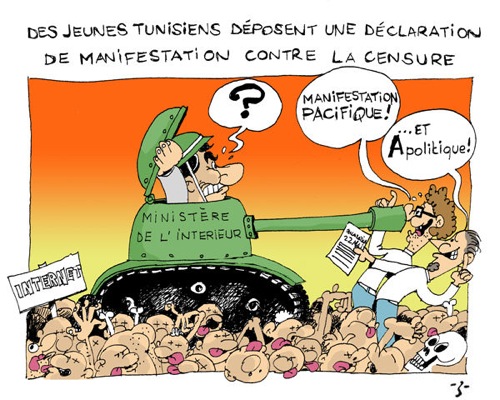 Following the recent massive wave of online censorship carried out by the Tunisian censor, targeting major social websites, such as the popular video-sharing websites, flickr, blogs aggregators, blogs, facebook pages and profiles, the anti-censorship movement adopted very creative, outspoken and brave tactics in protesting the online censorship. A censorship that is not only harming the country’s average Internet users but is also affecting professionals whose work is relying on web 2.0 services and platforms, like youtube, flickr and other media-sharing websites.

Far from being exaggerated, the Tunisian anti-censorhip movement is one of the best innovative in the world and has been adopting creative approaches and tactics from its early beginning to its current stage. From Yezzi Fock Ben Ali! (Enough is enough, Ben Ali!) and its online protest “Freedom of Expression in Mourning” organized during The World Summit on the Information Society (WSIS) held in Tunis in November 2005, to the Google Earth bombing for a free Tunisia, and the several national days and white notes against censorship, despite its technical and tactical advantages, has never managed to go offline and reach out to the average masses of Tunisian Netizens. It was mainly limited to a hard core of digital activists and bloggers who are pushing for a political and social change by making sure to remain independent from any political party while putting their struggle for online free speech within the continual and broader battle for fundamental rights and justice led by the civil society.

But things are about to change, since the new wave of online censorship is affecting everybody and is not anymore targeting the very dissent and political blogs and websites. Which is why it was not surprising at all to see how much the Tunisian internet community is abuzz with discussions related to various aspects of censorship policy and how much it is embracing and contributing to the anti-censorship protest.

The new anti-censorship efforts, which were prepared and organized publicly online by grassroots activists – on facebook, twitter and Google Groups and Docs – were involved in a wide range of initiatives and here are the most important ones:

However, the move that will revolutionize the entire protest had the merit to bring it offline. All started when the virtual protest culminated in a non-virtual one with the initiative Nhar 3la 3ammar (A day against the censor, or manif22mai, #manif22mai on twitter). Two activists and bloggers, Slim Amamou (@slim404) and Yassin Ayari, took upon themselves the courageous responsibility of calling to rally in front of the Tunisian Ministry of communication technologies on May 22nd, while ensuring to request a permit and respect the proper legal procedures which are required to hold a rally. The rally in Tunisia was also part of a May 22 worldwide day against Internet filtering in the country.

Slim and Yassine, joined at a certain point by Lina Ben Mhenni, mastered the art of communication by making sure to update their friends and sympathizers about each step they are taking, producing a serie of videocasts published on the not-yet-blocked video-sharing website vimeo as well as on facebook.

SAYEB.SALEH.S01E01.GENESIS.VOST.ENG from Malek404 on Vimeo.

And the expected happened: on May 21, a day before the rally, the two main organizers were arrested and investigated during the entire day. They appeared later on separate video messages where they were forced by the security forces to call off the rally and urge protestors to stay home. Slim was also forced to sign a document stating that he “understood that his call for a demonstration is wrong.”

The Police demanded that Slim records a video asking people not to show up for the planned demonstration. Apparently, Slim had to negotiate the terms of this “friendly public service announcement.” Afterwards, he had to sign a document saying that he “understood that his call for a demonstration is wrong” and then he was driven out by the police to record that “friendly reminder to stay home” aimed to dissuade people from demonstrating.

The same evening, a communiqué signed by the friends of Yassine & Slim – translated here by our friend from Morocco, Hisham (also available in French and in Arabic) alerted the public opinion and called for a plan B: “walk on Avenue Habib Bourguiba, in downtown Tunis, wearing white shirts and sit in the cafes on May 22nd at 3 pm, as a symbolic act to protest internet censorship“: 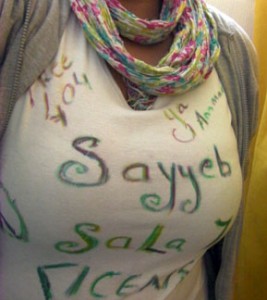 Friday May 21th, from 11 am local Tunis time and until now (6.30 pm), it has become impossible to contact any of both organizers of the citizen’s march, Slim Amamou and Yassin Ayari. This comes despite the fact that both organizers insisted they wouldn’t turn off their cell phones, not today, nor tomorrow, and that in the case their phones were not working they would use any internet connection from any public space nearby. Add to this the fact that Slim’s car was parked near Habib Bourguiba Street, and that most probably both organizers were contacted by the Ministry of the Interior to announce the march was disallowed (…), we assume tat they are now at the headquarters of the Ministry of the Interior or any of its affiliate centers.

Tomorrow, May 22 is the day of the march, called for by Slim and Yassin, who strictly followed the procedures prescribed by the law protecting the right to protest set forth by the constitutional (specifically Law No. 4 of 24 January 1969 “organizing public meetings and processions and demonstrations and gatherings,” particularly the chapters from Part II and Chapter I in Part I). We call on all citizens to consult the text of the law governing the right to demonstrate available in Arabic and French.

No one can declare the march “illegal” (nor “legal” for that matter) if the initiators can’t lead it. And until this moment it seems there is no possibility that they would. But at the same time, and as friends of Slim and Yassin, we can’t ignore the many indicators that prove that the march has been banned indeed. And it is necessary to inform everybody of all obstacles and difficulties so as not to leave Slim and Yassin exposed to liability or legal consequences in case the march is declared illegal.

At the same time we call upon all those who do not see the possibility of participating in the march to join the following initiative.

The initiative was clearly supported by Slim and it calls on supporters to walk on Avenue Habib Bourguiba wearing white shirts and sit in the cafes on Saturday at three o’clock pm, as a symbolic show of protest against [internet censorship]. At the same time we call on everyone to respect the campaign slogans and principles and focus on the issue of internet censorship and continue all efforts aimed at denouncing censorship by following legal means. Of course, we are also calling for the release of Slim and Yassin (if they are not freed before three o’clock on Saturday 22 May), free of any legal prosecution, since they upheld all legal procedures as mentioned earlier.

On May 22, Tunisians living abroad took to the street in front of their country’s embassies and consulates in Paris, Bonn and New York. In Tunis, dozens of young Tunisians have managed to converge on Avenue Habib Bourguiba and took part in the protest. And even if the presence of uniformed and plain-clothes police barring access to the flash mob site and making it impossible for an important number of sympathizers – easily recognizable by their white T-shirts – to join the protest or remain seated in the café terraces, Tunisia’s first flashmob protesting online censorship was a successful story that should inspire us all. 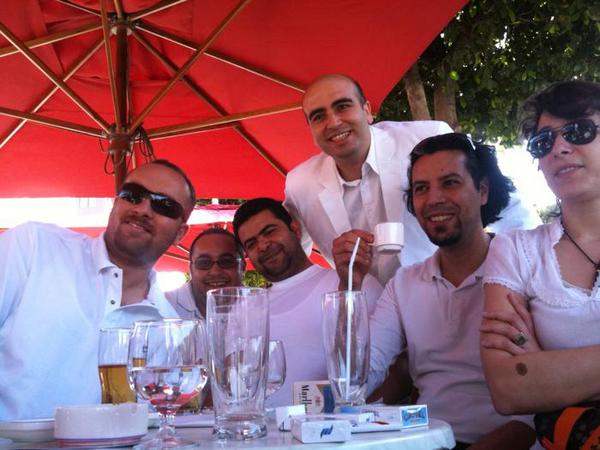 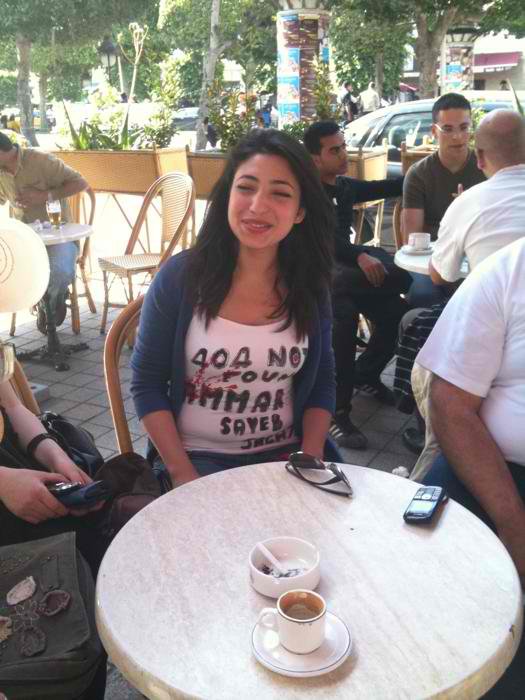 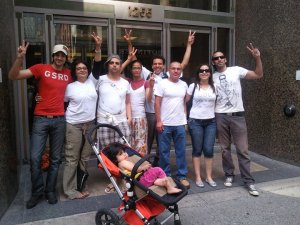 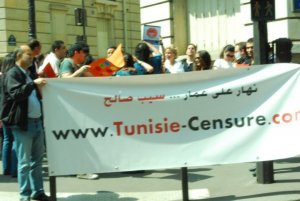