By John Thorne | The National 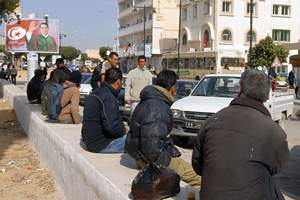 GAFSA, TUNISIA – Once a fortnight, Leila Khaled, a Tunisian housewife, comes down from Tunis, the capital, to the dusty mining region of Gafsa, to visit her son Muthafer Labidi in jail.

The rest of the time, she holds vigil at a Tunis hospital where her husband, Bechir Labidi, a trade union leader, lies ailing and handcuffed in his bed.

The father and son were arrested last July amid angry demonstrations over unemployment that has risen as the state phosphate company has gradually reduced hiring. The government has stepped in with a scheme to transform the derelict region into a hub of industry and private investment.

That is welcome news to jobless locals. But the worldwide financial crisis presents risks, while resentment simmers over the jailing of protesters in trials that human rights activists say were unfair.

“There are still police everywhere and people are afraid,” said Mrs Khaled. “We’ve heard all about the plans for development, but so far we’ve seen nothing.”

The plight of Gafsa has sent ripples through Tunisia, where finding work is a persistent worry despite education and living standards approaching those of western Europe.

The region prospered for decades under French rule in the 20th century. Out went phosphate from deep pit mines, in came luxury goods imported from France. Coveted jobs with the state phosphate company passed from one generation to another among the local villagers, an arrangement that continued after Tunisia gained independence in 1956.

Things changed in the 1980s, when the company began replacing men with machines. Today, unemployment – officially around 20 per cent but believed to be closer to 30 per cent – is palpable, with ragged men crowding into cafes to spend the day smoking narjilehs and watching television.

Resentment exploded in January last year, when locals cried foul at a long-awaited round of hiring that siphoned jobs to out-of-towners.

“Many people here rely on the phosphate company for work,” said Ali Kalthoum, a lawyer in Gafsa. “Most don’t have the means to look for a job elsewhere.”

Protesters clashed repeatedly with police, who arrested around 250 and last June allegedly opened fire on them, killing two, said Ridha Radaoui, a lawyer in Gafsa who has handled dozens of the resulting court cases.

Fahem Boukaddous, a correspondent for the satellite television station, al Hiwar Attounesi, who was among the few reporters regularly following the situation in Gafsa, fled in July upon hearing that police were planning to arrest him, said his wife, Afef Bennaceur.

In December, Mr Boukaddous was convicted in absentia of forming a criminal group and undertaking armed rebellion with over 30 trade union leaders, including Bechir Labidi. Many received sentences of up to 10 years in prison, with some of these lowered marginally to eight years on appeal last month.

Trials have been marred by irregularities, including judges’ refusal to order medical examinations of defendants who say police tortured them, said Mr Radaoui, the lawyer.

“For the state, the only way of dealing with social problems is police repression,” said Mokhtar Trifi, a lawyer and president of the Tunisian League for Human Rights, who helped defend Mr Boukaddous and Mr Labidi.

Authorities say it is time for Gafsa to move on.

“The courts have given their final word,” said Mohammed Chaieb, the region’s governor. “The matter is closed.”

For Mr Chaieb, the priority is enticing companies to set up shop in Gafsa. Under a new development programme launched last year by President Zine El Abidine Ben Ali, the government is improving infrastructure and offering tax breaks to sweeten the deal.

“This has been a mining region, but that’s changing,” Mr Chaieb said. “The goal is to make Gafsa a hub of industry through private investment.”

That plan is not foolproof given the global financial crisis, said Roger Bismuth, an adviser to Mr Ben Ali who is helping craft the Gafsa development programme.

“If demand for exports goes down in Europe, naturally we’re going to be hit,” Mr Bismuth said. But But he expressed confidence that Tunisia could continue to attract both domestic and foreign capital.

“We are stable politically and don’t have religious problems,” said Mr Bismuth. “We have an agreement of free exchange with Europe and can respond to orders within 48 hours.”

At the new industrial zone taking shape outside Gafsa, a local businessman called Ahmed Zeitouni has accepted the challenge. Armed with a contract from the Italian clothing company Benetton, he opened a factory last month making clothes for export.

“It’s a viable project, so I decided to get involved as soon as I heard about it,” Mr Zeitouni said.

Young women bend over a line of sewing machines, assembling up to 1,000 garments a day. Mr Zeitouni has 42 employees now, but wants to hire around 80 more in the coming months.

“We’re trying to instil a new mentality in young people,” said Mr Chaieb, the governor. “They expect public sector jobs – we want them to try something different.”